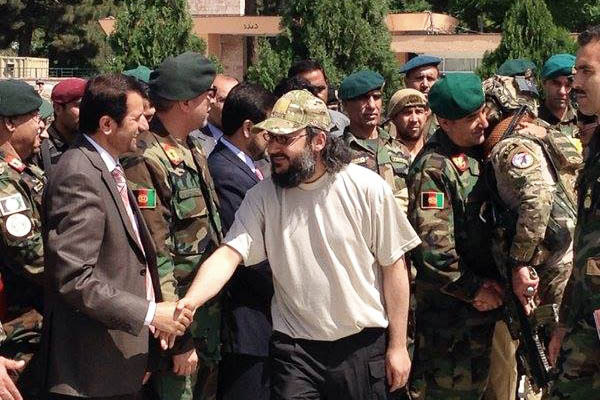 The freed son of former prime minister Yousaf Raza Gilani said Wednesday he was “looking forward to being reunited with my family” as he was handed over to Pakistani officials in Kabul after a three-year hostage ordeal.

U.S. and Afghan forces in eastern Afghanistan freed Ali Haider Gilani on Tuesday during a counter-terror raid. “I really appreciate Afghan forces who fought for my recovery,” Gilani, who was bearded, clad in a white T-shirt and sporting a camouflage baseball cap, told officials at the ceremony in Kabul.

After the ceremony he is expected to return to Pakistan on a special flight sent by Prime Minister Nawaz Sharif, according to the Pakistani foreign ministry.

Gilani was rescued in the Giyan district of Paktika province by U.S. Special Operations Forces and Afghan commandos in a joint raid, NATO has said. The Afghan presidency said the raid targeted an Al Qaeda cell.

Gilani was kidnapped by militants in the outskirts of Multan in Punjab province on May 9, 2013, just two days before a bitterly contested national election in which he was campaigning. He was 27 at the time. In May last year, he was able to phone his father to tell him he was well.

On Tuesday his father broke the news of his release to a cheering crowd at a political rally in Pakistan-administered Kashmir, as hundreds of people gathered at the family’s home in Multan to celebrate the news.

NATO said the raid was carried out under Operation Freedom’s Sentinel, the U.S. mission focusing on counter-terrorism as well as training, advising and assisting Afghan troops. Four “enemy combatants” were killed during the raid, it said.

The Pentagon was tight-lipped about events leading up to the raid, but said it occurred after U.S. and Afghan forces had “identified terrorist activity.”

“There were terrorists where they struck and conducted this raid, and during that activity they were able to rescue Mr. Gilani,” U.S. Central Command spokesman Colonel Pat Ryder said. U.S. Defense Secretary Ashton Carter heralded the raid as evidence of progress by Afghanistan’s struggling security services.