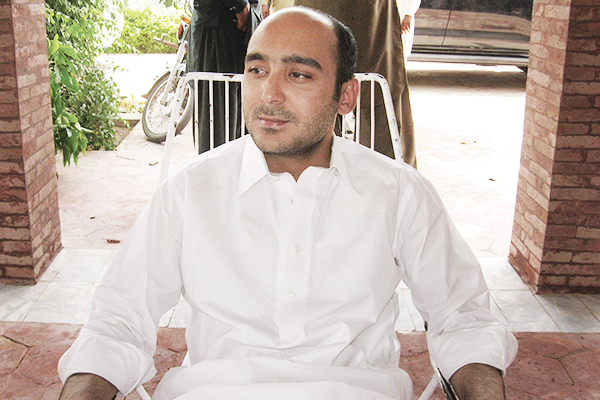 Kidnapped son of ex-premier claims he is safe and hopes to be reunited with his family soon.

The kidnapped son of former prime minister Yousaf Raza Gilani called his father on Sunday after two years in captivity and told him he was well.

Ali Haider Gilani, 29, was seized by suspected Taliban militants in a hail of gunfire on the outskirts of Multan on May 9, 2013, two days before the national elections in which he was campaigning. Gunmen on a motorbike opened fire before abducting Ali in a black Honda car. His secretary and a bodyguard were killed and four people wounded.

“My son Ali Haider Gilani told me that he is happy and safe at [an] unknown place,” said Yousaf Raza Gilani after the phone call. “He enquired about the health of his mother and other family members. He declined to disclose more and said that Almighty Allah will surely help us. He said that he is safe and sound and we should not be worried about him.”

Former foreign minister Shah Mehmood Qureshi, who was with Gilani when he received the eight-minute phone call, also talked to his son. “The call was made from [an] unknown place, probably from Afghanistan. Gilani [junior] told me that he is happy and in the safest place and that he was seeking God’s help to see his family soon,” Qureshi told reporters.

The ex-premier’s family is one of the most powerful in Multan and a key clan in the Pakistan Peoples Party (PPP), which lost the 2013 elections. The PPP’s campaign for re-election had been dramatically curtailed by threats from the Pakistani Taliban.

Gilani was prime minister from March 2008 until he was sacked and indicted by the Supreme Court in April 2012 for refusing to reopen corruption cases against the then-president. He had complained after the kidnapping that his family was not given security despite being threatened.

Apart from Ali, Shahbaz Taseer—son of a slain PPP leader and former governor of Punjab province Salmaan Taseer—was also kidnapped in August 2011. Both men are reportedly being held by the Taliban.