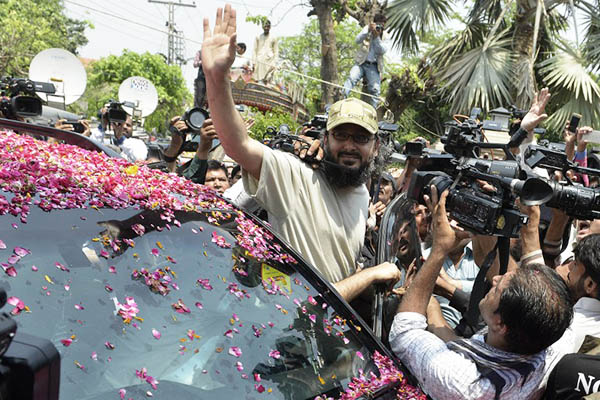 The freed son of former premier Yousaf Raza Gilani reunited with his family in a shower of rose petals in Lahore on Wednesday, three years after he was kidnapped then taken to Afghanistan.

Ali Haider Gilani was rescued during a joint U.S.-Afghan counter-terror raid in eastern Afghanistan on Tuesday.

Crowds of well-wishers dancing to drum beats greeted the 30-year-old’s arrival at his family’s home in Lahore in a black SUV strewn with pink rose petals.

Gilani, who is a triplet, was accompanied by his brother Ali Kasim on the journey from Kabul in a plane that the Pakistani foreign ministry said was sent by Prime Minister Nawaz Sharif. His father was reportedly absent from the reunion, with television channels reporting his appearance in a court in Islamabad on corruption charges.

“I really appreciate the… Afghan forces efforts,” Gilani, bearded and wearing a white T-shirt and camouflage baseball cap, told media at a ceremony earlier Wednesday in Kabul. “I would also like to thank the U.S. forces which at the critical moments of my release provided me with shelter, food and medical care. And, at this time, I am looking forward to be reunited with my family, just getting back to normal life.”

Gilani was kidnapped by militants from the outskirts of Multan in Punjab province on May 9, 2013, just two days before a bitterly contested national election in which he was campaigning. In May last year, he was able to phone his father to tell him he was well.