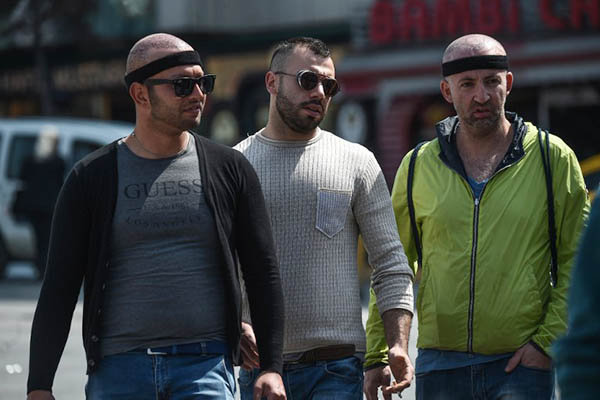 On his to-do list for his trip to Istanbul, Palestinian tourist Jameel wants to visit the Blue Mosque and take a tour on the Bosphorus, like any other tourist. But he has one more, less conventional purpose—to have 1,500 strands of hair implanted one by one, in an increasingly popular anti-hair loss treatment in the Turkish metropolis.

With over 300 clinics specialized in hair transplant alone, Istanbul is becoming a growing hub in the industry, attracting patients from all over the world but mainly from the Middle East and the Gulf. Experienced surgeons, advanced technology and relatively low prices are a plus for many tourists. And its growth in the last couple of years has come as a boon for a city where foreign tourism has fallen drastically since a spate of terror attacks in 2016.

“I came to Turkey for the hair transplant and a bit of tourism. Turkey has an excellent reputation when it comes to hair implants,” 27-year-old Jameel said, speaking to AFP after the surgery at an Istanbul hospital, on condition of not using his full name.

Faisal Abu Ahmad, from Saudi Arabia, said his uncle underwent the treatment in Turkey and so he followed suit. “Rapid hair loss pushed me to undergo the operation. I started getting bald spots,” he said.

At the tourist hubs of Istanbul such as Taksim Square, it is hard to miss the men wandering around with shaved heads and bandages after their operations, proudly sporting the branded headbands of their clinics. They have become so ubiquitous that residents of Istanbul joke that a man with a bandaged head could be the city’s new symbol.

“Prices are very, very attractive. However, the second most critical element is the quality of this treatment,” said Talip Tastemel, the general manager of Clinic Expert. “Turkey is very advanced in cosmetic surgeries and hair transplantation, so the patients are buying a very high quality treatment at a quarter of the normal cost” in some other countries.

Package offers for foreign patients include pickup from the airport, hotel accommodation, the surgery itself and tourism. Around 1,200 euros ($1,312) would get a patient three days in Istanbul and a top quality medical treatment, whereas the same surgery could cost up to 6,000 euros in Europe, or only slightly less in the Middle East.

The operation is carried out with Follicular Unit Extraction (FUE) where tiny hairs are taken out one by one from areas where the patient still has hair like the nape of the neck. After the harvesting, they are implanted in the areas where the patient has lost hair. The procedure takes around eight to 10 hours, while the tiny transplanted hairs can take weeks or months to take root and grow.

Emre Ali Kodan, consultant for the Health Tourism Association, said 5,000 foreign patients undergo hair transplants in Turkey every month, with the vast majority coming from the Middle East and the Arabian Peninsula, including Saudi Arabia, the United Arab Emirates and Qatar. “We are setting our sights on a 10-percent increase in hair transplant alone [in 2017]. It would not be a dream to reach up to 6,500 patients a month,” he told AFP.

Patients from Greece, Italy and Russia are also showing interest, he said. “Despite the decline in the tourism sector in 2016, we see a five-percent growth in health tourism, based on statistics,” Kodan said, adding that the aim was to achieve up to seven billion dollars in revenue this year.

Tastemel said the hair treatment sector was showing a resilience lacking in other branches of the tourism sector, which saw revenues plummet more than 17 percent in the first three months of this year compared to the same period in 2016. “Even when there were problems in the tourism industry it didn’t affect the medical tourism domain very much,” he said. “We kept doing a high number of operations even during the crisis period.”

A pharmacist himself, Jameel said he tried many medicines to stop hair loss but they didn’t work. “At this age, losing your hair has a big impact on your looks. That’s why when you lose it, you start looking for solutions to fix this hair problem,” he said.

Tastemel said men needed to be proud of their hair. “To be honest, men don’t have many accessories to present themselves with. It is mainly our cars, our watches and our hair at the end of the day,” he said. “We are not able to use make-up. The look that we have comes mainly from our hair, so when you lose it, it is like something is taken from you.”

Clinic Expert offers a range of cosmetic surgeries but hair transplants are its main business and Tastemel said success rates tended to be good. “In medicine you cannot guarantee a result, you can expect some failures occasionally, but in hair transplantation this is at the very minimum,” Tastemel said. “Anybody who does this in a decent clinic with a decent doctor, and a decent technique should expect 100-percent success.”