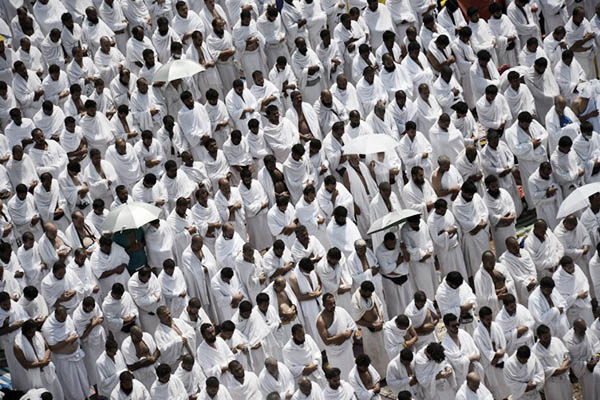 Saudi Arabian civil defense says around 450 others have been injured.

At least 310 people were killed and hundreds wounded in a stampede at the annual Haj in Saudi Arabia on Thursday, in the second tragedy to strike the pilgrims this year.

The stampede, one of the worst incidents to hit the Haj in nearly a decade, broke out during the symbolic stoning of the devil ritual, the Saudi civil defense service said. It said that at least 450 people were hurt and emergency operations were under way in Mina, about five kilometers from Mecca. It was not immediately clear what had caused the stampede.

Helicopters were flying over the area and the sirens of dozens of ambulances could be heard, AFP reporters said. It was the second major incident this year for Haj pilgrims, after a construction crane collapsed on September 11 at Mecca’s Grand Mosque, Islam’s holiest site, killing 109 people including many foreigners.

Hundreds of thousands of pilgrims had converged on Mina on Thursday to throw pebbles at one of three walls representing Satan, the ritual that marks the last day of the Haj. The Haj is among the five pillars of Islam and every capable Muslim must perform it at least once in a lifetime.

In the past the pilgrimage was for years marred by stampedes and fires, but it had been largely incident-free for nearly a decade following safety improvements. The last major incident occurred in January 2006, when 364 pilgrims were killed in a stampede during the stoning ritual in Mina.

Thursday’s ritual was taking place at a five-story structure known as the Jamarat Bridge, which cost more than $1 billion to build, and which was used during earlier pilgrimages. Almost one kilometer long, it resembles a parking garage and allows 300,000 pilgrims an hour to carry out the ritual.

The faithful had gathered until dawn on Thursday at nearby Muzdalifah where they chose their pebbles and stored them in empty water bottles. They had spent a day of prayer on Wednesday on a vast Saudi plain and Mount Arafat, for the peak of the Haj pilgrimage.

It was not immediately clear if the stoning ritual at Mina would continue as planned until Saturday after the stampede.

The ritual emulates the Prophet Abraham, who is said to have stoned the devil at three locations when he tried to dissuade Abraham from God’s order to sacrifice his son Ishmael. At the last moment, God spares the boy, sending a sheep to be sacrificed in his place.

The world’s Muslims commemorated Abraham’s willingness to sacrifice his son by slaughtering cows, sheep and other animals on Thursday.

Celebrations of Eid al-Azha were also marred in neighboring Yemen, where a suicide bomber struck a mosque in the capital Sanaa in an attack targeting Shia worshippers that killed at least 25 people and wounded dozens during prayers. There was no immediate claim of responsibility but Sanaa has been shaken by a string of bombings by the Islamic State jihadist group in recent months targeting Shia Muslims.