Home Culture Half of Marine Life Wiped Out in 40 Years: WWF

Half of Marine Life Wiped Out in 40 Years: WWF 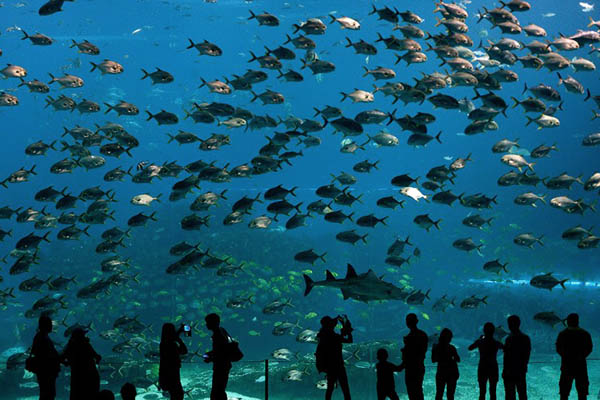 Pollution, industrial fishing and climate change have killed off half of marine life in the last four decades, according to a WWF report released Wednesday.

The family of fish that includes tuna and mackerel, for example, has declined by three quarters since 1970. “In the space of a single generation, human activity has severely damaged the ocean by catching fish faster than they can reproduce,” Marco Lambertini, head of WWF International, said in a statement. “Profound changes are needed to ensure abundant ocean life for future generations.”

Fish are not the only marine organisms in steep decline, the report found. Large swathes of coral reef, mangroves and sea grasses have died off or been hacked away. This loss has decimated fish populations and, in turn, imperiled some 850 million people who depend directly on these ecosystems for their livelihoods.

Half of all coral has already disappeared, and the rest will vanish by 2050 if temperatures continue to rise at current rates, previous research has shown. “Coral reefs occupy less than one percent of the ocean surface, but they harbor a third of ocean species,” said French biologist Gilles Boeuf, commenting on the report.

Doubling previous samplings, the joint WWF and Zoological Society of London analysis tracked 5,829 populations of 1,234 species for an updated, “more troubling” picture of ocean health. At the same time that the volume of marine life is diminishing, so too is the number of species, both in the ocean and on land, other research has shown.

Indeed, scientists believe Earth has entered a sixth “mass extinction event,” with species disappearing 100 times more quickly than only a century or two ago. There have been five such episodes over the last half-billion years, the most recent wiping out all non-avian dinosaurs and most other forms of life some 65 million years ago.

A quarter of shark and ray species face extinction, largely due to overfishing, the WWF report said. “In the Mediterranean there are four shark species we have not spotted in thirty years,” said Philippe Cury, a scientist at the Research Institute for Development in Marseille. Fifty percent is a critical threshold for loss of marine life, Cury said of the findings. “When you go below 50 percent, ecosystems begin to malfunction,” he said.

WWF called on world leaders to prioritize ocean recovery when the United Nations’ 15-year Sustainable Development Goals are approved later this month. “We must take this opportunity to support the ocean and reverse the damage while we still can,” Lambertini said.

The WWF stressed that marine life can be restored if the human population starts to live within sustainable limits.

The report said protected global ocean area—currently about 3.4 percent—should be tripled by 2020. It also called on consumers and fish retailers to source from companies that follow certified “best practice” standards. “If we had not intervened to protect the bluefin tuna in the Mediterranean, there probably wouldn’t be any,” Boeuf said by way of example.

The WWF likewise suggested that a levy on fishing industry profits could be earmarked to restore marine life. “These changes are happening in our lifetime,” Lambertini said. “We can and we must correct course now.”