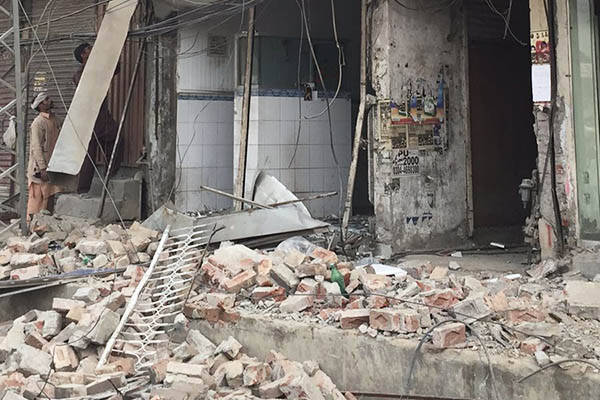 Shops demolished to make way for the Orange Line. Photograph by Benazir Shah

Two experts have questioned lack of information about the Punjab government project and urged a halt to all demolition work.

“Lahore residents have been forced to vacate their homes and businesses with little to no notice, receiving in some cases only verbal information within days of demolition,” said U.N. Special Rapporteur on the right to adequate housing, Leilani Farha. She said there were no resettlement or compensation schemes for people who were losing their homes, many of whom live below the poverty line.

“Many of the residents simply do not have the means to find alternative housing. This project is creating homelessness amongst an already vulnerable population,” she warned.

“These [buildings] are of importance not only to local people and the entire cultural landscape of Lahore but are of national significance for the history and cultural heritage of Pakistan,” she said, adding, “These historic neighborhoods form an organic, living heritage with the people who inhabit them. The project will not only destroy physical sites but the ways of life that have developed there, that people cherish and through which they express their dignity and identity.” Both experts also questioned the lack of information concerning the project and the reported changes to the route of the Orange Line following an initial public hearing in July 2015. “The details about the tendering projects, financing and costs, structural details, design, route and environmental impact have not been shared with the citizens, who have been protesting against the project since the beginning of construction work,” the U.N. Special Rapporteurs said.

Both independent experts expressed concern that the government had not considered alternative options, which would be less damaging, would result in less displacement and which would include strict measures to protect heritage, community and the environment.

“The Pakistani authorities must take all necessary steps to secure the right to an adequate standard of living including housing and cultural rights as defined in international human rights laws and standards recognized by the country, and to halt all ongoing demolition and construction works that do not meet these standards,” they said.

Punjab Chief Minister Shahbaz Sharif has been personally pushing for the Orange Line project’s completion. His attention has been met with criticism from opposition parties at both the provincial and federal levels, who claim it is prohibitively expensive and are demanding more transparency from the government. Stakeholders in Lahore have contested the project and its procedural flaws, and some cases presented before the court of appeal are still pending decision.

We, the dwellers of Lahore, have a right to have every step of this major government project explained to us. The expected benefits and costs, environmental impact and heritage reports, audit process, funding source, contractors backgrounds, expected duration of project. In particular we should be able to question the decision making process and the composition of bodies like Public Procurement Regulatory Authority who should be required to present themselves for open interrogation on media or before televised parliamentary hearings.