Home Latest News After TV Anchor Is Shot, Media Turns Its Guns on the ISI

After TV Anchor Is Shot, Media Turns Its Guns on the ISI 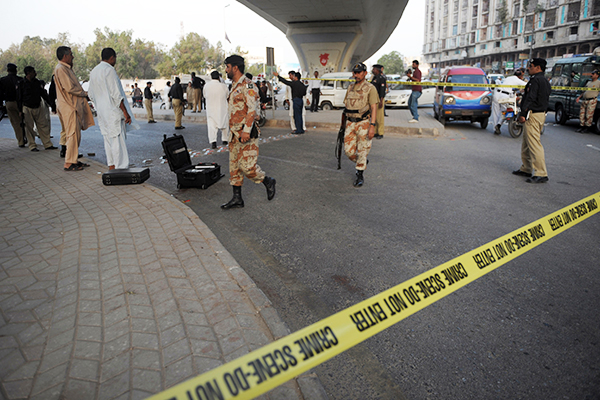 Mir and colleagues blame ISI for the shooting.

Hamid Mir, who hosts Capital Talk on Geo News, was shot at en route from the airport to his media organization’s office in Karachi around 5 p.m. on Saturday.

The incident took place about six kilometers from the airport, near Karsaz, according to police official Peer Muhammad Shah. “Four gunmen riding on motorbikes started firing … when Mir’s car was passing through,” said Shah.

Mir’s driver whizzed him to the Aga Khan University Hospital, where he underwent emergency treatment. The anchor’s colleague Rana Jawad, bureau chief of Geo News in Islamabad, spoke to Mir right after the shooting. “I spoke to him briefly when he was escaping,” said Jawad. “He said they have shot him and now they were following him. He has been shot in the pelvis, abdomen, and thighs.” After three hours in surgery, Mir was out of danger.

The attack on the controversial talk-show host and columnist follows a recent attempt on the life of another TV journalist, Raza Rumi, in Lahore last month. Both attacks prompted outcry from journalists, who have demanded greater protection from the government.

Punjab’s chief minister, Shahbaz Sharif, who has been criticized scathingly by the ruling party in Sindh province for allegedly not doing enough to protect those at risk, tweeted his shock over the Mir attack and advised that the “Sindh [government] should go after the culprits with full might and bring them to justice ASAP.”

Within two hours of the attack, the focus of Geo News shifted to Pakistan’s Inter-Services Intelligence agency. Geo News reporters began blaming the ISI and its chief, Lt. Gen Zaheer ul Islam, for the attack. Several claimed to have themselves been threatened by either the ISI or by “nonstate actors” thought to have links with the ISI. Asked Ansar Abbasi: Who else, apart from the ISI, could know of Mir’s movements? (The answer to that is: quite easily, several people within Geo News.) In his hourly appearances on the channel, Abbasi kept up his demand that Islam resign immediately.

The allegations against the ISI came after Abbasi and Amir Mir, the shot anchor’s widely-respected journalist brother, said Mir had recently recorded a video message for the New York-based Committee to Protect Journalists claiming that the ISI was gunning for him and that a plot to dispatch him had been finalized when Islam’s predecessor, former Lt. Gen. Shuja Pasha, was in charge. (Mir was said to have shared the same concerns with his colleagues and friends in government.) Meanwhile, CPJ has said it has not received Mir’s video. Joel Simon, CPJ’s executive director, says: “Media is reporting that [Mir] sent a video to CPJ. We have no record of receiving it but are reviewing all of our communications.”

The military’s Inter-Services Public Relations wing responded by condemning both the attack on Mir and the allegations it aroused against the ISI: “A spokesman of ISPR condemned the incident of firing on senior anchor Hamid Mir, prayed for his wellbeing and quick recovery. The spokesman said that an independent inquiry must immediately be carried out to ascertain the facts. However, raising allegations against ISI or the head of the ISI without any basis is highly regrettable and misleading.”

Mir had traveled from Islamabad to Karachi to cover the arrival there of former president and Army chief Pervez Musharraf, who landed in Karachi at 9:17 p.m. last night on a flight chartered from Karachi-based Princely Jets. Musharraf reacted to the Mir attack through a Facebook post: “I am disturbed to learn of the attack on Hamid Mir earlier today. While I do not agree with his politics and unethical journalism, I condemn the attack on his life. This senseless violence in Pakistan must come to an end. I also take strong exception to the baseless [aspersions] being cast on the Pakistan military, the intelligence service [ISI] and especially the military leadership. This reckless blame game must stop; it is endangering the integrity and sovereignty of Pakistan.”

On Sunday, Prime Minister Nawaz Sharif asked the country’s chief justice to form a three-member judicial inquiry commission to probe the Mir attack. The Islamabad government has also offered Rs. 10 million for information leading to the arrest of those responsible. Sharif also recommitted himself to providing security to at-risk journalists.

Hamid Mir’s brother has accused the ISI straight away. ISI won’t indulge in such a petty thing. They have a major trans-frontier role to play.

Please correct your misleading headline. It’s only Geo channel that has turned their guns on ISI. Everyone knows Hamid Mir isn’t a clean man and neither is Geo a saintly channel. They are opportunists and what better to put the blame on ISI without knowing the truth. Geo has come out in the open. Pakistanis need to recognise and know the snake in the grass. Most Pakistanis are condemning this unwarranted act of Geo to blemish Pakistan.

Violence against journalists, writers , intellectuals and innocent Pakistanis must be stopped because already Pakistan has two major problems to solve: 1) the conflict between army and the democratically elected Parliament and the 2) Talibans versus the State. Talibans has not yet released innocent civilians which they had kidnapped long time ago and their terror must be tackled by the both forces of Pakistan: the army and the elected government of Mr. Nawaz Sharif.

What geo channel is doing.Please Top three of PAKISTAN requested to stop this channel using against our most respected ISI AND ARMY.

I request to the PM please stop this channel because this is trying to blame our most respect able ISI.

i think those people who have been continuous blaming on IsI . Immediate action and punish these people .who are insult, our brave Pakistan army .

The fact of the matter is that Mr. Mir and Geo have their hearts in India and bodies in Pakistan. They have done their utmost to diminish the image of our arm forces especially ISI. What would you expect now? ……They are paying the price….

pemra has to take a stick action on that otherwise tomorrow the other channels or any other t.v actor will dare to disrespect pak army

I have been watching accusation made by Geo and Hamid Mir against the ISI , do they have no shame. if they love India so much then they should GO AND LIVE THERE. further more while they are in Pakistan they should be tried for treason.

I AM FULLY AGREE WITH HAMID MIR