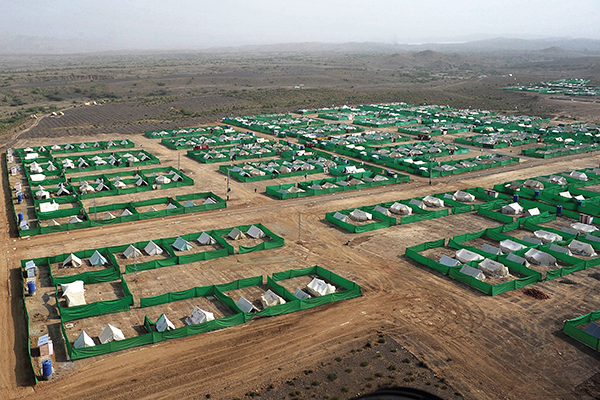 The war against extremism will turn on how we treat the displaced.

Pakistan’s internally-displaced population has disappeared from the news. With almost a million people having been forced out of the federally-administered North Waziristan tribal agency almost two months ago, the crisis is still ongoing. How this crisis is resolved will determine how the country fares in its long and halfhearted fight against extremism.

The crisis can be resolved. This is evident from Pakistan’s response both to its worst ever floods, in 2010, and to the crisis of displacement from the Swat military operations in 2009. The humanitarian crisis caused by Zarb-e-Azb, the military operation against local and foreign militants in North Waziristan, presents a humanitarian challenge, a human-rights challenge, and a development challenge. These challenges have to be addressed by providing not just the basics for survival, but also by ensuring the protection of the basic rights and civil liberties of those affected, and fulfilling their rehab and livelihood requirements.

During the floods, I was involved in collecting and recording stories of the displaced in order to help find durable solutions for their rehabilitation. The data showed that 71 percent of the displaced families had relied on agriculture or livestock for their livelihood, 83 percent were food-insecure, 86 percent had lost their homes and business assets, and none of them had any savings. Because the floods were “the will of God,” as most put it, these people were more tolerant of the poor administration that delayed their rescue.

While the economic status of those displaced from North Waziristan is comparable to that of the flood-affected, Pakistan’s latest internally-displaced are far less patient. They neither accept nor deserve the maladministration they are presently facing and which appears to be the result of the inexcusably adversarial relationship between the federal government, which is responsible for the tribal agencies, and the Khyber-Pakhtunkhwa government, which governs the areas where most of the displaced are currently residing.

The squabbling among politicians, seen as fair-weather rulers by most of the tribal population, and their blame games delay not only the immediate and continuous state response to the crisis but also further postpones the already delayed replacement of the anachronistic political-legal framework that applies to the federally-administered tribal areas with a viably modern social, political, and economic setup.

The internally-displaced are not statistics or props for photo ops. They are cash-strapped and asset-poor with only rubble to reclaim where their houses once stood. Their stand in the war against extremism cannot be taken for granted; their immediate and future needs must be serviced with consistency and resolve. Many of them already question the wisdom of the military operation as some politicians maintain that the process of peace talks with the Taliban should have continued. This view will become the prevalent one should the state, and the nation, fall short in their duty to the displaced.

It certainly does not help that the authorities have failed to protect the displaced from militant attacks in their camps. This will not make them any less wary of the security commitments of the state. The resultant alienation will ultimately benefit fringe Islamist groups, toward which the vulnerable displaced will be drawn out of fear or fervor. It has also been reported that militant groups have stepped in with their impressive organizational capacity to provide relief. Given the scale of the crisis, the government must, at the very least, make sure that proscribed groups are not allowed any direct access to the displaced.

Unfortunately, it bears emphasizing that the displaced must be treated with dignity and compassion. The provinces of Punjab and Sindh had closed their borders to them. Some prominent Pakistanis had even urged the equivalent of internment for them. This was not the response the crisis merited.

A UNHCR report from April states that an overwhelming majority of those displaced are residing outside relief camps. A similar pattern was apparent in 2009 when the majority of those who had fled Swat also preferred to live with their relatives across Pakistan. Such offsite channels prove challenging for both documentation and the provision of basic services. The National Database and Registration Authority must properly and respectfully document the displaced, especially women and children, and relief agencies need to recognize the role of local communities and put in place an outreach program for better management of the offsite population. Right now, the displaced require not merely food rations and first-aid but also effective cash transfers (the Watan Cards were useful during the floods and can work here too) and a clearly-defined path for their future.

The impact of displacement is felt more intensely by women, children, and the elderly. In fact, women matter vitally to the success of any rehabilitation option, and ongoing humanitarian-aid strategies need to be inclusive of women. The UNHCR report also states that 54 percent of the displaced are male, 46 percent women; overall, 41 percent are below the age of 11 while 3 percent are over 60. Humanitarian aid provided to the displaced over the next 6 to 12 months needs to account for the differences in the needs and types of the displaced population in order to be effective while taking into account the emotional and physical trauma of displacement on different segments. At another level, this can be seen as an opportunity for improving the lot of women and demonstrating that, despite cultural norms, including women fully in managing the current crisis can lead to a process of empowerment.

Since the military operation represents the war between ideologies, the Taliban’s and the state’s, it is equally critical that the basic rights, including the right to education, and civil liberties of those affected be preserved and promoted. Peace cannot be built without the full buy-in of the displaced, especially women. In 2009, several tribal agencies set up Aman Lashkars, groups of armed citizens, with the support of the state to ward off militants. These groups were successful to varying degrees and—if their role is clearly defined as supporting the local police—can help keep the peace once the operation is over. Post-operation, the civilian administration in the tribal areas has to strengthen its ability and tactical capacity to provide long-term solutions on the ground.

All agencies involved in humanitarian assistance need to collaborate fully. During the floods, coordination between the National Disaster Management Authority and the provincial disaster-management agencies was a messy affair because of parallel mandates and confusion in terms of budgetary allocations. This eroded crisis responsiveness. The NDMA has now been placed under the Ministry of Provincial Coordination where it has fallen prey to the usual bureaucratic hurdles. Despite these challenges, will made a way through coordination between civilian and military agencies and the crisis from the floods was overcome. This can be achieved today as well.

The war against extremism cannot be won without making sure that the displaced can return home to a secure future. This requires effective governance, establishing the writ of law, protecting fundamental rights, providing access to basic services, and bolstering the local economy through strategic infrastructure investments. Zarb-e-Azb is yet another test for the nation. Pakistanis have on previous occasions proven that they will step up and defend, through their generosity and compassion, the ideals enshrined in our Constitution. We must not tire of these tests and continue to live up to the expectations of our beleaguered countrymen. Anything less is not an option.

Cynthia Ritchie Has Been Working With ISPR, KP...