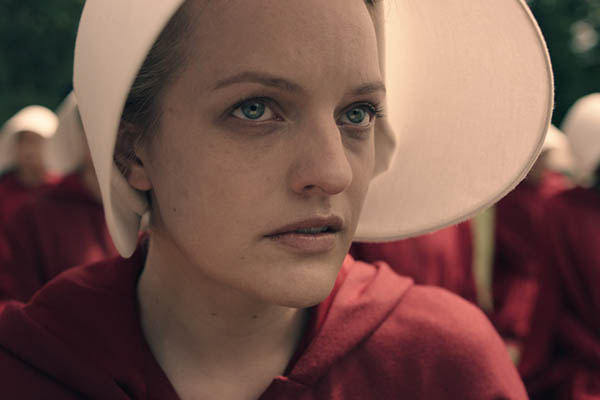 The first three episodes are released by streaming platform Hulu on Wednesday, with excitement piqued among the landmark novel’s fans by a marketing campaign featuring appearances in public across America of the story’s iconic scarlet-clad “handmaids.”

Published in 1985, Atwood’s bestseller is required reading in many schools and often mentioned in the same breath as George Orwell’s 1984, Aldous Huxley’s Brave New World and other dystopian works of speculative fiction. Over the years it has spawned a movie, a graphic novel, an opera and a ballet.

The TV series stars Golden Globe-winner Elisabeth Moss (Mad Men) in a near-future in which New England has been dismantled in a theocratic coup and replaced with Gilead, a tyrannical regime where men mete out brutal punishments and rape is mandated by the state.

Moss plays Offred, one of the few remaining fertile women who work as “handmaids,” forced into sexual servitude in a desperate attempt to repopulate the climate-ravaged world.

American critics have remarked how Atwood’s nightmarish vision has never felt more relevant in an age of religiously-inspired massacres, campus sex attacks and a proposed assault on reproductive health care that has driven women to march in the thousands.

“In April 2016, when Hulu first announced its plans to adapt the book into a television show, a Hillary Clinton presidency seemed forthcoming, and the novel’s setting, in a near future misogynist theocracy, seemed to be at a nice, safe, strictly metaphorical distance,” wrote Slate magazine TV critic Willa Paskin. “Then Donald Trump was elected president. That nice, safe distance closed up in a hurry.”

While Trump is not seen as particularly religious, Paskin suggests that The Handmaid’s Tale is a logical conclusion of the uglier realities of Trump’s America—not least what she describes as the “gaping pit of contempt for women” revealed by last year’s U.S. election.

Sales of the novel have surged since November’s vote, according to U.S. media, and it is currently third on Amazon’s fiction bestseller list. Both 1984 and Brave New World have seen similar boosts.

“I hate to say the story is newly relevant, as if it weren’t for three decades,” said James Poniewozik of the New York Times. “But face it: when you have a president who talks about women as if they were squeeze toys, who implied a tough female journalist was on her period, whose administration gathered a room full of male politicians to discuss women’s health coverage—well, the viral marketing takes care of itself.”

Not resting on its laurels, Hulu has been building buzz by sending women dressed in the iconic handmaid’s uniform of crimson dress and white bonnet to public events from San Diego Comic-Con and South by Southwest in Austin to the Los Angeles Times Festival of Books.

A group of “handmaids” even showed up at the Texas Senate in March to protest over a series of bills that would tighten abortion laws.

The first full trailer dropped in March, featuring a chilling monologue from Moss in which she declared: “When they slaughtered Congress, we didn’t wake up. When they blamed terrorists and suspended the Constitution, we didn’t wake up either. Now I’m awake.”

The teaser sparked cries of “leftist propaganda” from Trump supporters on YouTube. “I’m done with this, it feels like I can’t trust women to even believe that all men aren’t evil. Feminism needs to die now,” whined one critic.

It’s not just right-wingers the show has managed to annoy. Members of the cast angered fans of the novel by downplaying its feminist angle during a preview of the first episode at New York’s Tribeca Film Festival on Friday. Madeline Brewer complained that any story about powerful women was “automatically deemed feminist” while Moss declared: “For me, it’s not a feminist story. It’s a human story because women’s rights are human rights.”

The comments, which fly in the face of academic thinking about the novel, sparked an immediate backlash on social media from fans of the book baffled that the actresses would disavow its obvious feminist message. Moss’s quote was put to Atwood on Twitter, prompting the Canadian writer and environmental activist to reply that “they needed an ‘only,’ an ‘also’ and a human rights definition of the F-word, imho.”