Home Scope Hanging Out With Hezbollah

Hanging Out With Hezbollah 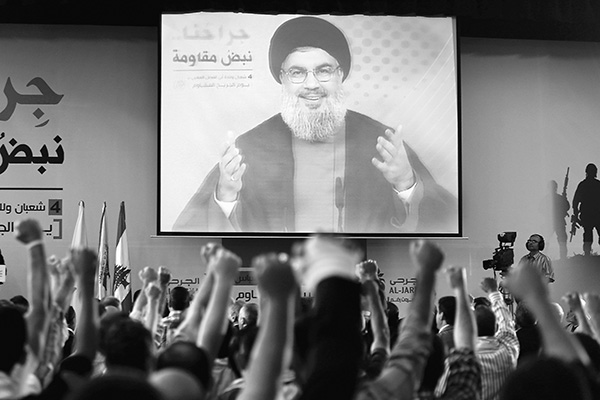 The feared Shia militia that has often fought Israel is now deeply involved in Syria.

The intervention—Hezbollah’s first full-scale battle to reinforce Assad in Syria—suggests a new direction in the war and has seemingly prompted the U.S. to rush supplies to the rebels. It has also fanned fears that Hezbollah’s involvement will drag Lebanon deeper into the Syrian quagmire and possibly ignite a sectarian civil war between Sunnis and Shias within Lebanon itself.

But the idea that this may be treacherous territory isn’t foremost in the mind of the Hezbollah commander. To him, this is opportune training ground. “What we are doing in Syria in some ways is a dress rehearsal for Israel,” he says.

With Qatar and other Gulf countries reportedly delivering “game-changing” weapons to the rebels, and Russia supplying Damascus with a new air-defense system, the civil war has morphed into a full-throttle proxy conflict pitting the Sunni Muslim governments of the Gulf against Shia Iran.

But no local group has had greater military impact in recent weeks than Iranian-backed Hezbollah, the Party of God, which has lent support to Assad’s regime from the start of the civil war with small numbers of fighters but which is now clearly committed to do all it can militarily to save Syria’s dictator.

Rare interviews with members of the highly secretive organization provided insight into the mindset of the fighters who handed Assad his biggest battlefield victory in the 28-month-long civil war. After the fight for Qusayr, the Hezbollah fighters appeared galvanized, ready to continue fighting for Assad. One source of their elation lies in the fact that during the recent battle they went head-to-head with the feared jihadists from the Al Qaeda-affiliated group Jabhat al-Nusra—and defeated them.

“Al-Nusra is meant to be a strong fighting force, but they are not as powerful as they pretend to be,” another Hezbollah member said. “We heard on the radio a jihadist saying, ‘God was not with us’ as he fled.” The remark was greeted by chortles from comrades as they sipped tea in a cluttered, dusty office whose only decorations were large photographs of the movement’s leader Hassan Nasrallah and Iran’s Ayatollah Ali Khamenei.

Acknowledging that he had lost several men, the commander conceded the jihadists had been resolute in the fight. He fiddled on the table with two smartphones and the keys to his Jeep when asked if he had lost friends in Qusayr. Drawing heavily on a cigarette, he responded: “We all lost people.”

Dressed in a beige suit with a yellow shirt, clean-shaven and with short dark hair, the commander didn’t conform to the caricature of a fanatical Muslim fighter. And neither did a dozen of his men sitting discreetly some distance away at a long table in a riverside restaurant in East Lebanon’s Bekaa Valley. All were clean-shaven and dressed smartly. But, like their commander, they were highly alert to their surroundings and clearly physically fit, as befitting fighters of Hezbollah’s elite commando units.

Hezbollah fighters have been schooled from a young age to submit to strict military discipline and are nurtured in a culture of martyrdom, believing God sanctions their struggles. Many have attended university or at least completed high school: their military and ideological training is rigorous and they are lauded within the Shia communities of the Bekaa Valley and southern Lebanon as defenders of a Muslim sect that traditionally was powerless and downtrodden in a country dominated by Christian and Sunni Muslim landlords and politicians.

Founded in 1982, Hezbollah in three decades reversed the traditional political roles in Lebanon, making the Shias the power in the land—a power that many Shias believe can only be maintained for as long as Hezbollah is there to protect them.

Even Lebanese Shias far removed from their rural heritage and who now live middle-class lives in affluent districts of Beirut harbor admiration for a movement that indirectly helped them or their families escape the grind of smallholdings. “I still respect Hezbollah,” says the managing editor of a glossy color magazine. “They transformed the lot of Shias here. But I am nervous about what they are doing in Syria—I am afraid they will bring the war to Lebanon.”

It isn’t a fear shared by the Hezbollah commander, who believes defending Assad is the same thing as protecting Lebanese Shias. He acknowledges the ties between Hezbollah and Assad, knowing full well Hezbollah would never have grown to be as powerful as it is without Syria’s backing and he says defending Assad is a matter of loyalty.

But like other Hezbollah members well versed in the ideology of a movement that likes to market itself as a broadly Muslim organization but ultimately is a Shia one, the commander sees the fight in Syria as a religious war between true Muslims and Sunni jihadists. Reeling off a list Sunni jihadist abuses—from the Taliban destruction of Buddhist statues in Afghanistan to forcing women to wear the burqa—he says: “In Afghanistan they did not spare the rocks. They disobey the Quran because they kill people who don’t agree with them.”

But Israel was never far from the senior Hezbollah commander’s thoughts during the interview. Engagement in Syria isn’t just about protecting Assad but about defending those who support the “resistance” against Israel, he says.

And if Assad loses, what then for Hezbollah, deprived of a key ally in the “resistance”? In an echo of the movement’s leader, Nasrallah, the Shias of Hermel can’t conceive that God is not on their side.

please correct yourself hezbollah is against the takfiri militants not sunni muslims, people like you are responsible for dividind sunni and shias apart