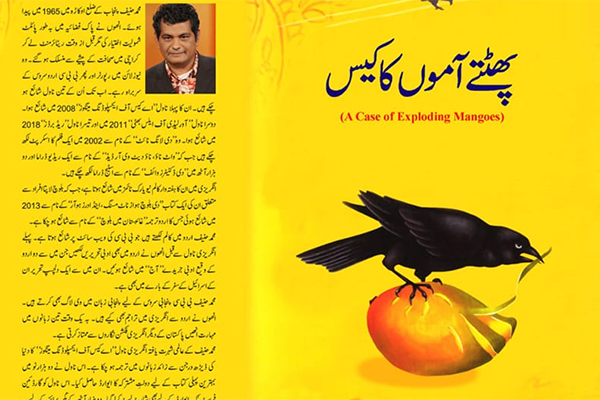 Cover of the Urdu edition of ‘A Case of Exploding Mangoes’

Globally renowned satirical writer Mohammed Hanif on Monday took to social media to allege that men claiming to be from Pakistan’s top intelligence agency had raided the offices of the Urdu publisher of his debut novel and threatened employees to obtain information about his whereabouts.

In a series of posts on Twitter, Hanif said the purported raid had occurred on Monday afternoon. “This afternoon some people claiming to be from the ISI [Inter-Services Intelligence] barged into my Urdu publisher Maktaba Daniyal offices, confiscated all copies of Urdu translation of A Case of Exploding Mangoes. Threatened the manager, wanted information about our whereabouts. Coming back tomorrow to get lists of booksellers,” he said.

The satirical Mangoes, published in English in 2008, digs into the many conspiracy theories that surrounded the death of military dictator Gen. Ziaul Haq in 1988. The award-winning book—it received the Best First Book Award in 2009—has been widely acclaimed for its comic look at life in Pakistan during the peak Islamization that was the hallmark of Zia’s leadership tenure.

Continuing his commentary, Hanif said it was curious that the alleged ISI raid had occurred within a week of him receiving a defamation notice from Zia’s son “demanding Rs. 1 billion for maligning Gen. Zia’s good name.” Noting that his lawyers were already drafting a legal response, he questioned: “Is ISI acting on Ejazul Haq’s behalf?”

Adding to Hanif’s confusion is the timeline of the raid as well as the defamation notice. “A Case of Exploding Mangoes has been in publication for 11 years now. Nobody has ever bothered me. Why now? I am sitting here, wondering when will they come for us. ISI is World’s No 1 spy agency. I am sure they have better things to do,” he added.

Concerned fans on Twitter noted that Hanif might have been able to escape scrutiny thus far because his novel was in English, a language that a relatively small percentage of 220 million Pakistanis read. With its translation in Urdu hitting shelves just last year—in October—it might have attracted a critical audience that was thus far unaware of its existence.