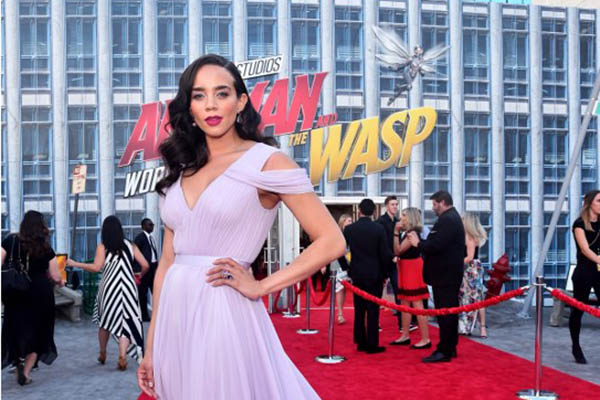 The villain of ‘Ant-Man and the Wasp’ on female villainy, karaoke with Spielberg

When Hannah John-Kamen learned she was to be Marvel’s next supervillain, she let out a yelp, hung up the phone and cranked up “Do My Thang,” Miley Cyrus’s empowering paean to self-determination.

“Wrecking Ball” might have been a better fit, given the actress’s shock-and-awe introduction in Ant-Man and the Wasp as Ghost, an ethereal entity who passes through walls but packs a vicious punch.

“I was back in London and I got the call, and it was all my agents together. I remember I literally just screamed. I was in my apartment, I was walking around, going, ‘Oh my God, oh my God!’” the 28-year-old Briton recalls. “I was so excited, And then I just blasted out Miley Cyrus’s song ‘Do My Thang.’ I don’t know why, it was just on my playlist, and I blasted that out and just danced.”

In Hollywood, a role in a Marvel movie that lasts until the end credits can be a key to the kingdom, offering follow-up appearances in spin-off movies and all manner of “Avengers” mashups.

John-Kamen—who has credits in Game of Thrones and Black Mirror as well as parts in Star Wars: The Force Awakens, Tomb Raider and Ready Player One—is ready for superstardom.

The daughter of a Nigerian forensic scientist and Norwegian former fashion model from northeastern England, she still pinches herself when she thinks about working with Steven Spielberg. She describes taking direction from the icon on the spring blockbuster Ready Player One, in which she played sinister gamer gang leader F’Nale Zandor, as “absolutely amazing.”

“There’s no feeling like when you’ve done a take and he’s so happy and he’d go, ‘Now that’s a movie moment!’ And you’ve got that coming from Spielberg,” she told AFP in an interview in Pasadena, southern California. “I mean, its nuts. We would sing show tunes together. We’d sing ‘Singin’ in the Rain,’ we’d sing ‘Guys and Dolls.’ In between takes, we’d sit. Sometimes we’d get the lyrics printed and we’d just sing.”

Spielberg, according to John-Kamen, has a “wonderful voice” and a joy about him that makes his movie set a “fun playground that you get to go in and play.”

Ant-Man and the Wasp, which hits U.S. theaters on Friday, is the sequel to 2015’s Ant-Man, the 20th release in Disney’s Marvel Cinematic Universe (MCU), and the first to feature a woman in the title role. Starring Paul Rudd and Evangeline Lilly, it is also only the second MCU film with a female principle adversary, after Cate Blanchett’s Hela in Thor Ragarnok (2017).

John-Kamen’s Ava/Ghost—an anti-capitalist saboteur turned supervillain in the comics—acquires her mysterious powers in a lab accident that makes her cells intangible. “It’s a male character in the comics… but to be the first person to take it off the page and actually give her life, it was an honor,” John-Kamen said.

The actress says it was important not to play Ghost as a traditional villain—no dastardly plans for taking over the planet—instead giving a nuanced performance that emphasizes her tragedy. “I’m doing this for a reason, as an objective. The stakes are high. I don’t think you just wake up in the morning and go, ‘Ha ha ha! World domination—that sounds fun!’” the actress said. “So I definitely approached that with the mind of going, ‘Okay she’s the good guy and everyone else can go to hell.’”

Executive producer Stephen Broussard said Marvel was looking for someone less recognizable and was taken with John-Kamen’s “intensity, her vulnerability and with her sense of humor.”

Her previous training as a dancer coupled with the desire to fully flesh out Ghost’s threadbare backstory made her perfect for the role, he added.

As is Marvel’s custom, John-Kamen was initially told very little about the part but enjoyed “every single minute” of the audition process, which eventually took her to Atlanta to meet director Peyton Reed. “You think with an audition you’d be like, ‘Oh my gosh, I was so nervous. Oh my goodness, I was shaking.’ Of course, there’s a high anxiety but I remember just getting in there and going, ‘Oh, okay—I feel really relaxed,’” she recalled. “I’m really excited about this material and what we can do, and I’m excited to show you what I’ve come up with.”