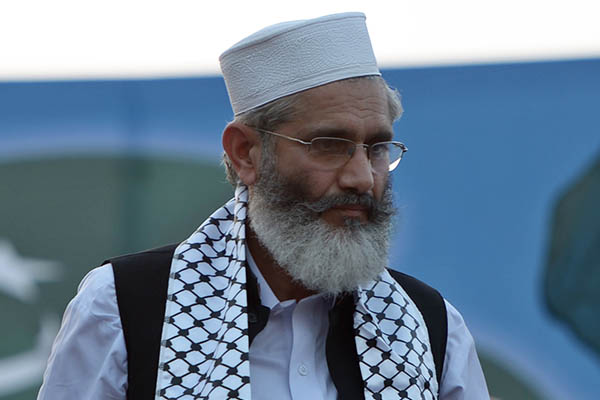 Jamaat-e-Islami chief says the resignations should not be accepted in light of the ongoing situation in Islamabad.

The chief of the opposition Jamaat-e-Islami has met the speaker of Pakistan’s National Assembly and urged him to wait a few days before accepting the resignations of Pakistan Tehreek-e-Insaf parliamentarians.

Speaking to journalists in Lahore, Siraj-ul-Haq said that premature acceptance of the resignations could cause new problems. “In my view, accepting the resignations of PTI members would create new crises in the country,” he said. “I met [speaker] Mr. Ayaz Sadiq to request that he not accept the resignations immediately,” he added.

The PTI, which is currently protesting against alleged rigging in the 2013 general elections, has resigned from 34 seats in the National Assembly, claiming Parliament does not represent the will of the people. The party has also submitted resignations in the Punjab and Sindh provincial assemblies, but remains in power in Khyber-Pakhtunkhwa province. It has no representation in Balochistan province.

According to Haq, the resignations should not be accepted as a matter of routine. “I met former president Asif Ali Zardari and other leaders from the Pakistan Peoples Party, and we agreed that the speaker should not deal with the resignations on technical grounds, but should try to resolve the situation keeping in mind the ground realities,” he told journalists. “According to the 4th clause of Article 224 of Pakistan’s Constitution, the Election Commission is bound to conduct by-elections within 60 days of any seat in the National Assembly falling vacant,” he added. “I have urged the speaker to give us some extra time to try to resolve the issue through negotiations with both the government and Imran Khan,” he said.

Haq said both the government and the PTI were committed to “true democracy” and this had encouraged him. “But this will take some time,” he added. “I am hopeful we can defuse the tension through a positive approach,” he said.