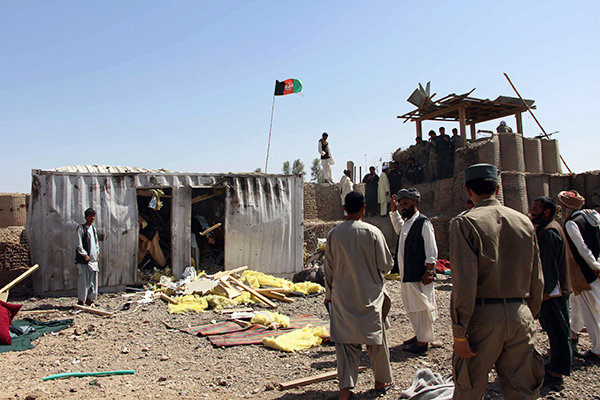 Site of a suicide car-bombing near a police-training base in Helmand, May 14. Noor Mohammad—AFP

Don’t up the ante on the row with the U.S.

Pakistan-U.S. relations have taken a plunge over the so-called Haqqani network that is said to be attacking Afghan and American targets inside Afghanistan from Pakistani territory. Washington now says Pakistan has to go after Haqqani pockets on its territory. For starters, it has barred American aid that underpinned Pakistan’s purchase of eight American F-16 jet fighters, which means a cash-strapped Pakistan will have to pay for them.

Pakistan has responded by denying the Haqqani connection and says it will buy the planes elsewhere for $700 million, but there are concerned critics in Pakistan who advise not upping the ante on this bilateral row. The Haqqanis are indiscriminately killing people in Afghanistan, eclipsing a Pakistani excuse that a growing role of India in Afghanistan’s security management is worrisome after the recent capture of Indian agents in Pakistan.

It is not wise on the part of some media in Pakistan to talk of “American slavery” while arguing for “freedom” of policy on the Haqqani issue. The slaughter across the Durand Line has been significant: in 2015, more Afghan civilians and troops were killed than in any other year since 2001. Pakistani opinion-writers have taken note of the Haqqani depredations in the northeastern provinces of Parwan, Kabul, Logar, Khost, Paktia and Paktika. The most recent outrage was the Haqqani hit in Kabul that killed 70 and wounded 347.

Afghan President Ashraf Ghani has given up on the peace talks with the Taliban, who smell victory mainly because of the Haqqanis. Pakistan has to tread carefully, unshaken in its resolve to disprove the charge of “double game” and vacate all safe havens on its territory.

American opinion remains guarded. Here’s what a recent New York Times editorial had to say: “Severing ties as the United States did in the 1990s after Pakistan developed a nuclear weapon is unwise. The two countries still share intelligence, and Pakistan allows American drones to target militant leaders in the border region. Given that Pakistan has the world’s fastest-growing nuclear arsenal, America needs to be able to maintain a dialogue and help Pakistan keep the weapons out of the hands of extremists.”

The world realizes that pakistan is a failed state with nuclear weapons which is danger for world peace.

Deja vu. Wack the dog…which is Pakistan of course. Unstable Afghanistan actually helps more India than Pakistan. Unless and until Indians are removed from this calculation there will never be a peace in this region. Indians can keep whining about the “failed state” but Pakistan has their “Monkey”.