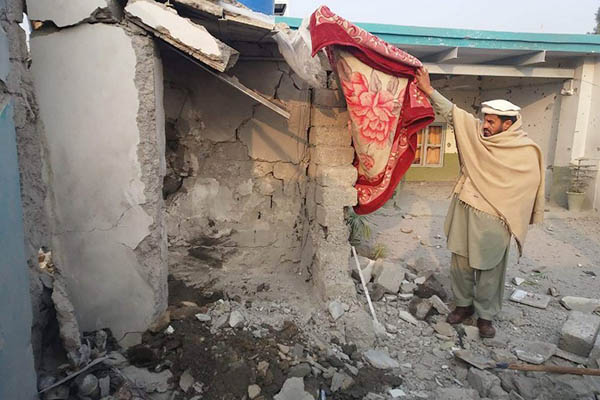 A suspected U.S. drone attack in northwest Pakistan killed a militant from the Haqqani Network allied to Afghanistan’s Taliban on Wednesday, officials said, days after Afghan authorities accused the group of attacking a Kabul hotel.

The pre-dawn strike took place more than 50 kilometers from the Afghan border, in the village of Mamuzai in Kurram tribal district.

Pakistan’s Foreign Ministry condemned the strike, which it said was carried out by NATO’s U.S.-led Resolute Support mission in Afghanistan. The U.S. embassy in Islamabad declined to comment and there was no immediate comment from NATO forces in Kabul.

A senior government official in Kurram told AFP that the drone fired one missile at a two-room compound, killing the militant and destroying the building. He named the dead man as Nasir Mehmood, alias Ihsanullah Khurya, and described him as an Afghan national and a “mid-level commander of the Haqqani Network.”

“The U.S. drone remained in the air even after the strike and was flying there for almost 15 minutes,” the official said.

Two Pakistani intelligence officials in the area also said the U.S. had carried out a drone strike, but according to their information the drone fired two missiles and killed two militants of the Haqqani Network in the compound.

A source close to the Haqqani group confirmed that at least one mid-level Afghan commander had been killed.

Pakistan’s foreign ministry slammed the “unilateral action” as “detrimental” to cooperation between the uneasy allies, and claimed it targeted an Afghan refugee camp. “Pakistan has continued to emphasize to the U.S. the importance of sharing actionable intelligence so that appropriate action is taken against terrorists by our forces within our territory,” it said.

The U.S. and Afghanistan have long accused Pakistan of ignoring or even collaborating with groups that attack Afghanistan from havens inside Pakistan, a claim Islamabad denies.

This month Washington froze aid to Pakistan worth almost two billion dollars in a move designed to force its military and intelligence apparatus to cut support for Islamist groups. The Haqqani Network—whose head Sirajuddin Haqqani is a deputy chief of the Afghan Taliban—was once described by U.S. Admiral Mike Mullen as a “veritable arm” of Pakistan’s Inter-Services Intelligence agency.

On Sunday the Afghan interior ministry blamed the group for an hours-long attack on Kabul’s Intercontinental Hotel in which at least 22 people were killed, including U.S., Ukrainian, Kazakh and German citizens.

The Taliban has claimed responsibility for the attack. Authorities are still investigating how the militants breached security at the hotel.

The aid suspension sparked speculation that the U.S. could resume drone strikes or launch operations along Pakistan’s border with Afghanistan, where militant groups once operated with impunity. Following the aid freeze, the Pakistani military released a statement citing U.S. Central Command chief General Joseph Votel as assuring them that Washington “is not contemplating any unilateral action” inside Pakistan.

The freeze has cooled the relationship between the ostensible allies and prompted indignation in Pakistan, which insists the U.S. does not recognize the thousands of lives it has lost and billions it has spent battling extremism.