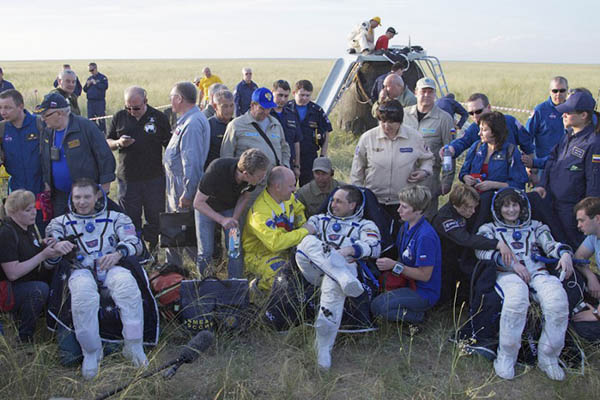 Three astronauts return to Earth after nearly 200 days on the International Space Station.

Three astronauts landed in Kazakhstan on Thursday, safely returning to Earth after their flight back home was delayed for a month by a Russian rocket failure.

Russia’s Anton Shkaplerov, Italy’s Samantha Cristoforetti and Terry Virts of the United States landed on schedule on the steppes of Kazakhstan and appeared to be in good health.

Both Russian mission control and NASA reported no glitches, but Shkaplerov, the commander of the Soyuz spacecraft, said their landing was “hard and quick.”

“For some reason, we were spinning,” he said in comments broadcast on national television and cited by Russian journalists. No other details were provided. The 43-year-old cosmonaut added, however that “everything worked accurately.”

All eyes were trained on the flight back home for the astronauts after Russia was in May forced to delay their return, as well as the departure of their replacements, because a supply ship had crashed back to Earth following a rocket failure. Upon landing the trio emerged out of the capsule with the help of recovery teams, giving the thumbs up and smiling under a setting sun.

Seated in a chair to allow him to adjust to gravity, Shkaplerov said he hoped such “joint work” would continue in the future. “It was a textbook homecoming,” a NASA commentator said.

A spokesman for the Russian mission control said that the Soyuz descent module landed southeast of the town of Jezkazgan in Kazakhstan, after detaching from the ISS more than three hours previously. “Everything is fine, everything is okay,” he said. The Roscosmos space agency said separately that the three crewmembers were “feeling well.”

The Twitter account of the ISS said the trio would be “checked by docs, depart to Karaganda then split up to US & Russia.”

The astronauts ended up spending nearly 200 days on the station, with Cristoforetti, 38, breaking the record for the longest single stay by a woman in space. The Italian air force pilot has gained worldwide popularity—and nearly half a million followers on Twitter—posting dramatic pictures from space and even giving cooking classes. “So long… and thanks for all the fish!” Italy’s first female astronaut wrote on Twitter before starting the journey home, using a quote from Douglas Adams’ cult science fiction novel The Hitchhiker’s Guide to the Galaxy.

Their 199-day mission included several spacewalks, technology demonstrations, and hundreds of scientific experiments, NASA said. “During their time aboard the orbiting laboratory, the crewmembers participated in a variety of research activities focusing on the effects of microgravity on cells, Earth observation, physical science, and biological and molecular science,” it said.

The International Space Station is one of the few areas of cooperation between Russia and the United States that has not been hit by the crisis in Ukraine. Russian and U.S. scientists are keen to study Venus together, the head of the Russian Academy of Sciences, Vladimir Fortov told President Vladimir Putin on Thursday. “We have agreed on some additional projects to study space, to study Venus—that had earlier been in doubt,” Fortov was quoted as saying by the Kremlin.

The next manned mission to the ISS is due to blast off on July 23, the Russian space agency said on Thursday, launching from Kazakhstan with astronauts from Russia, Japan and the U.S. NASA astronaut Kjell Lindgren, Russian Oleg Kononenko and Japan’s Kimiya Yui will join Russia’s Gennady Padalka and Mikhail Kornienko and Scott Kelly of NASA who are continuing research and maintenance aboard the station.

Russia’s space program was hit by two failures within weeks in May, with the Progress crash followed by the failure of a Proton rocket carrying a Mexican satellite.