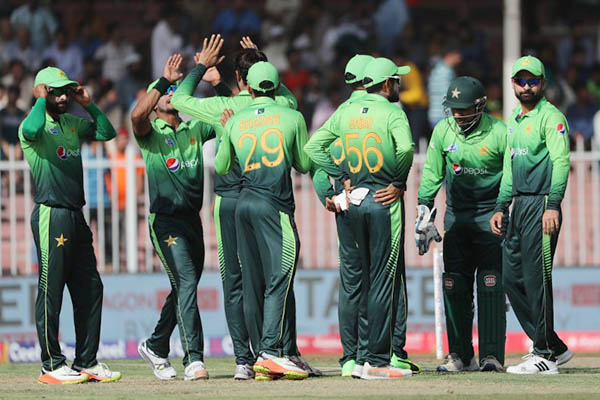 Medium pacer Hasan Ali grabbed three wickets to celebrate his rise to the top of the one-day rankings as Pakistan downed Sri Lanka by seven wickets in the fourth day-night international in Sharjah on Friday.

Only Lahiru Thirimanne resisted with a 94-ball 62 on a flat pitch at Sharjah stadium on which Babar Azam scored a stroke filled 69 not out and Shoaib Malik matched him, also with an unbeaten 69, to help Pakistan overhaul the low target in 39 overs. Despite Pakistan losing three early wickets, the target was never out of reach as Azam and Malik shared an unbroken 119 runs fourth-wicket stand.

Malik smashed Milinda Siriwardana for a boundary and a six to seal the victory. He hit three sixes in all and two boundaries in his 81-ball knock while Azam, who had scored successive hundreds in the first two matches, had five boundaries off 101 balls.

Pakistan lost Imamul Haq for two after his debut hundred in the last match while Fakhar Zaman fell for 17 and Mohammad Hafeez made nine.

This was Pakistan’s eighth consecutive win, which also included their Champions Trophy triumph in England in June while Sri Lanka succumbed to their 11th consecutive ODI defeat.

The fifth and final match is also in Sharjah on Monday.

“It was my childhood dream to be world number one and it was my goal when I started cricket so I am very happy that this has come true,” said Ali. “It’s always my aim to take wickets and anchor the team’s win so I am again happy to be the main bowler,” added Ali, who now has 12 wickets in the series.

Earlier, Sri Lanka got off to a disastrous start when their in-form skipper Upul Tharanga was bowled by debutant left-arm pacer Usman Shinwari for nought off his second delivery. Shinwari was one of two changes Pakistan made from the third one-dayer, which they won by seven wickets in Abu Dhabi. Also brought back was Wasim. They replaced Fahim Ashraf and Rumman Raees.

Sri Lanka had made three changes, with Sadeera Samarawickrama making his debut.

Another left-armer Junaid Khan ended Niroshan Dickwella’s enterprising 16-ball 22, studded with three boundaries and a six, while Dinesh Chandimal was run out for 16. Samarawickrama lasted just two balls without scoring before Thirimanne and Siriwardana (13) added 32 for the sixth wicket.

Shadab then removed Seekuge Prasanna (five) and Thisara Perera off successive deliveries before Ali came into his wicket-taking acts.

Ali broke a resolute eighth-wicket stand of 43 between Thirimanne and Akila Dananjaya (18) before Wasim ended Thirmianne’s resistance in the 41st over.