Home Culture ‘He Was a Deflator of the Orthodox’

‘He Was a Deflator of the Orthodox’ 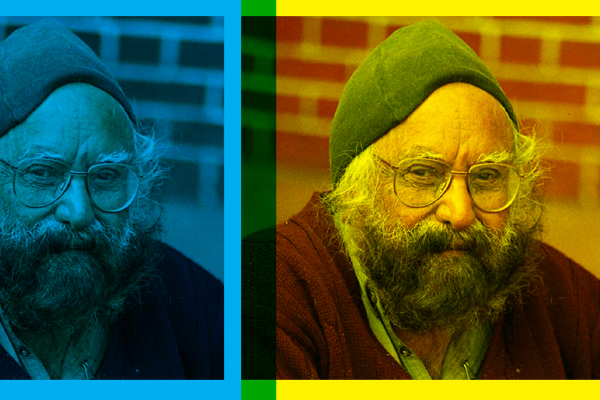 Khushwant Singh—lawyer, journalist, author, oddball-at-large—died on March 20, a year short of a century. I had two meetings with him: once when Aziz Ahmed Khan, our minister and later high commissioner in New Delhi, took me to his house whose doorway carried a cleverly phrased message dissuading visitors from calling on him; and the second time with my friend Shekhar Gupta, then with India Today and now The Indian Express. Singh pricked the pompous and stung the stereotypical all right, but that he was for the underdog was proved to me when he compelled me to part with a book I was clutching.

“What book is that?” he asked.

Singh sat up from his sprawling couch: “What do you mean ‘trivia’?”

I told him it was about words. I was a bit depressed because South Asians not only despise the low art of studying words but normally end up insulting authors who fall in this error. (Muhammad Hussain Azad, the 19th-century genius, committed the heresy of lecturing an audience at Lahore’s Government College on how Sanskrit and Persian were etymologically connected and had to say “sharminda hota hoon” (“I am ashamed”) after noticing that most of them had fallen asleep in the middle of it.) On my return to Lahore, I was floored on seeing Singh’s one-page column on my book in the Calcutta weekly, Sunday. Singh was clearly being kind to an unknown Pakistani writer.

Sikhism was eclectic enough to engage him and he ended up writing a two-volume history of the Sikhs. He kept favoring Prime Minister Indira Gandhi in his analyses—calling her by her middle name Priadarshini (“of lovable appearance”), and cursing Sant Jarnail Singh Bhindranwale—until the Golden Temple was stormed, after which he returned India’s high civilian award, the Padma Bhushan. This was understandable. Loyalty to faith overrode his political alignments.

What connected Singh to Muslims was Sikhism itself. The holy book, Adi Granth, was not a collection of punishing edicts but an anthology of mystical poems culled from Punjabi and Rajput classics, from Baba Farid to Kabir and Meera. The compilation of Sikh scripture began under the faith’s founder, Guru Nanak, who thought of it because of his attraction to the idea of Ahl-e-Kitab (People of the Book) in Islam.

Singh was a master of the short take; he often told risqué jokes as fillers. And as a deflator, he would rile up orthodoxies on both sides of the India-Pakistan argument. I heard him speak in Lahore in the 1990s. Ever provoked by orthodoxy and its steel-frame essentialisms, he delivered a gem: “Before Jinnah became the father of Pakistan, he was a son of India.” The audience was stunned. His visit was probably eased by what he had said in 1993: “India should give serious consideration to allowing the Kashmir Valley [excluding Ladakh and Jammu] to become an autonomous entity whose existence is guaranteed jointly by its neighbors, India and Pakistan.”

The great man knew what was happening to Pakistan, and knew it quite early on—in the 1950s, when Qurratulain Hyder, arguably the greatest Urdu novelist, reacted like Manto to the “imagined homeland” she was required to live in, and fled to India. There, she found a niche at The Illustrated Weekly of India, then edited by Singh. Both Singh and Hyder eventually received state awards and landed in Indian Parliament.

Even at the risk of defying national textbooks, Pakistanis must learn to empathize with Singh, an Indian innocently yearning for the good old days when India was undivided. It is just as innocent as when an unfeeling Pakistani tells a Bangladeshi ‘let’s get together, again’ without first acknowledging, let alone apologizing for, the 1971 massacres.

Singh was born in Hadali, a Muslim-majority village a few miles west of the Jhelum River. His family was well-heeled, his father a Knight of the British Empire. After St. Stephen’s in Delhi, Singh decided on Government College. Later, at London’s King’s College and the Inner Temple, he did not shine but pulled through, as they say, and couldn’t make it to the Indian Civil Service.

His nostalgia for Lahore was not overly cuckoo. He had lived in a city that never pluralized. He recalled Hindus and Muslims at the High Court bar had always sat separately while communists, spiritual half-breeds like Som Anand, Anglo-Indian types, and cultural drifters like Jamsheed Marker and Roedad Khan, eyeing Christian girls in Lahore’s dramatics, fell through the cracks of a society retarded by communal hatred. The subterranean magma did indeed exist. Principal Sondhi’s daughters, who ended up marrying Muslims, say they never saw a Muslim visiting them at home. The demons suddenly came out once the British were gone and the Unionists were toppled. The mullahs were calling down curses from the minarets and the Rashtriya Swayamsevak Sangh was alive and well in Model Town.

Singh, whose rich father, a contractor to the Indian Army, had sent him to Lahore from Delhi to become a lawyer, wrote about his exodus experience. His family had a big house on Lawrence Road and he was a family friend of Manzur Qadir, the gifted lawyer-son of Sir Abdul Qadir, who took him under his wings. (Manzur would later become foreign minister of Pakistan.) Both Manzur Qadir and Singh had beautiful wives: Qadir’s was the daughter of Sir Fazle Hussain, the strongman of the Punjab who ruled all of India from the Viceroy’s Council from 1930 to 1936; Singh’s was the daughter of a highly respected minister in Patiala. Singh talked of people in Lahore who came to his house and enjoyed his hospitality, people he loved. But when the riots broke out in 1947, after the dismissal of the Khizr Ministry, he knew what was coming sooner or later. During the riots, Qadir hid his family and put his own nameplate on Singh’s house to deceive arsonists. But the violence was unrelenting and Singh had to leave at the last minute, Qadir driving him up to the border to see him safely off.

While he loved Ghalib and Faiz, and translated them, Singh had a fascination for Pakistan’s national poet-philosopher Allama Iqbal, who inspires Pakistanis with dreams of dominance even after a 66-year peripety of horrors. He translated his work readably and revived him for India. His passion was Iqbal’s famous dialogue with God, the Shikwa.

He wrote a typically “revealing” column on Iqbal’s family which may not please the literary orthodoxy of Lahore: “I am beholden to P. V. Rawal of Jammu for sending me a photograph of Allama Iqbal’s Kashmiri Brahmin family taken in Sialkot in 1931. At this time, Iqbal was in his mid-fifties. He had already risen to the top as the greatest Urdu poet, at par with Mirza Asadullah Khan Ghalib. Although he was proud of his Brahmin descent, he had nothing to say about his Hindu relations. In this picture, the elderly lady seated in the middle is his grandmother Indirani Sapru, nicknamed Poshi, wife of Pandit Kanhaya Lal Sapru. The man standing on the left in a shawl is Iqbal’s cousin Amarnath Sapru; note the close resemblance to the poet. The family traces its origin to one Birbal. They lived in the village of Saprain (hence, the surname Sapru) on Shopian-Kulgam Road. Then the family moved to Srinagar, where Iqbal and most of his cousins were born. Birbal had five sons and a daughter.”

Singh was spot-on when he called Iqbal “a great poet who made the mistake of dabbling in law and politics, the two domains in which he was not a success.” He thought far too much importance was placed by Pakistanis on Iqbal’s Allahabad address and his attendance of the Round Table Conference where he was, in fact, unable to make any meaningful contribution.

On Singh’s death, Ghalib is most probably reciting his famous line: “Aisa kahan sey laoon keh tujh sa kahain jisay” (“From where should I get someone whom people would acknowledge as your equal”).