Home Culture ‘He Was Determined to Defy Time, Even Death’

‘He Was Determined to Defy Time, Even Death’ 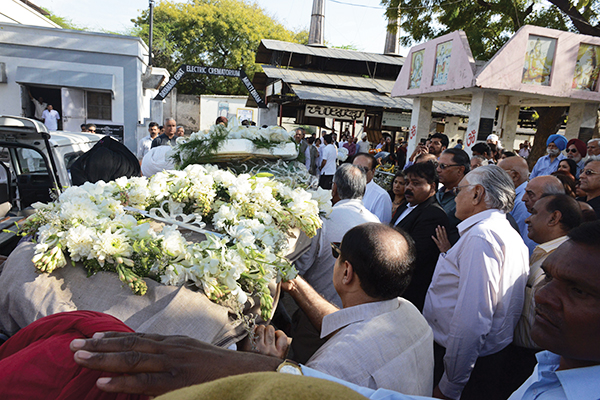 Sujan Singh Park, a leafy apartment block a stone’s throw from Khan Market, is one of New Delhi’s most famous landmarks because it was home to Khushwant Singh—the prolific writer, journalist, and indefatigable columnist who died on March 20 less than a year shy of his 100th birthday. As a 9-year-old on my first trip to India, middle-aged Singh’s ground-floor flat stood out from the cluster: like the man who inhabited it, it was accessible and closer to earth.

More than two decades later, I stayed at Sujan Singh again. This time I met Khushwant Singh, who would always and generously welcome curious Pakistanis of all stripes, including journalists like myself. He had agreed to an interview, provided I answered questions about his beloved Lahore—“The city with the most beautiful women,” he said—where he was schooled.

My visit almost didn’t happen. The Kargil semi-war had ended just a month earlier, and tensions still running thick were not helped by India shooting down a Pakistan Navy aircraft killing all 16 onboard. The usually upbeat Singh, a dedicated ambassador of “normal” India-Pakistan relations, was down in the dumps about this. Any hope of a rapprochement between the two countries was gone, he felt at the time. But when we turned to talking about Lahore, he lit up in a beat. He spoke wistfully about his schooldays, his time as a young lawyer at the Lahore High Court, the “lovely lasses” of the city, the pain of Partition. Singh held on to these reminiscences jealously and stubbornly, refusing to demonize or dehumanize the Pakistani “other.” His grief over Partition is articulated with great power in Train to Pakistan, his heartfelt novel. (I told him about my grandfather, who had served as secretary-general of the Unionist Party, who opposed the splitting of the Punjab not just because he stood to lose his lands in Malerkotla, but also because he foresaw as inevitable the carnage of 1947.)

In Singh’s mind, the halcyon days were pre-Partition, when people of different religions lived and loved together in seeming harmony. He pointed to the off-white curtains in his sitting room. “Assalam-o-Alaikum, Walaikum as-Salam,” they read. “I just liked them so I have them hanging in the room I spend most of my time in,” he explained. The quirky curtains were an act of defiance, a thumbing of the nose at the Two Nation Theory. Singh was steeped in the history of his religion and had authored the two-volume A History of the Sikhs. My great-grandfather has written a similar book, which Singh insisted I scour for in Khan Market.

I had been warned off Singh: he was a “dirty old man.” Except that he wasn’t. He was a simple man who spoke and lived plainly. I found him to think the company of his wife, a doting host, reassuring. He drank daily, probably to dull the pain he still so visibly and acutely felt of times gone by. Still, despite his years, he would play lawn tennis every evening, and appeared determined to defy time, and even death.

Singh made sure I took home a documentary he had watched recently about the erstwhile state of Malerkotla in Indian Punjab whose Muslim rulers, my father’s family, had ensured that not a single life was lost during Partition. The film resonated with Singh for rooted firmly in the history it chronicled was the example of men forgetting their creed and caste and simply looking out for each other, like brothers.

After my interview with him was published, he sent me a handwritten letter. He thought the piece was “beautifully written” and said he had used blurbs from it for a brochure of an awards ceremony. I reread his letter on March 20.

Singh had no airs about him, that’s something his writings seldom convey. His sense of mischief was apparent in the mercilessly funny jabs he took at all the great personalities of his time. He didn’t suffer fools and loved nothing more than to take the pompous down a few pegs. He was generous to me, a perfect stranger, because I hailed from his beloved Lahore. He pitied those who lived and loved falsely and mocked them with his life of laughter. To live and die like Khushwant Singh would not be so bad.

Upstaged at The Hague

Fans Will Be Fans