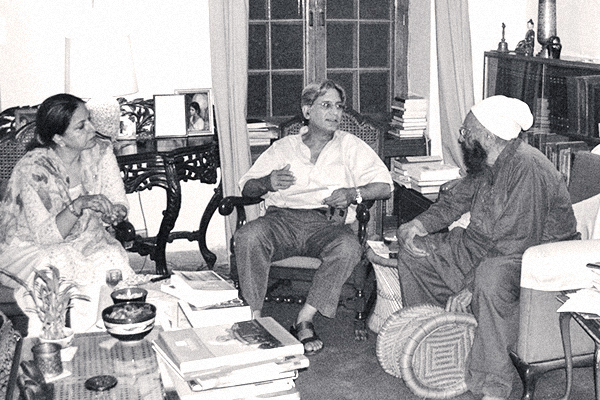 There are millions of entries on Khushwant Singh online. Wikipedia alone yields hundreds of pages that describe Singh’s life and times, his opinions, his writings, his achievements, and the universal recognition that came his way. Every detail of his 99 years and his thought is fully covered and available to everyone in just one click.

By the time Singh died, on March 20, he had written dozens of books and tens of thousands of columns with wit, sarcasm, and a beating concern for humanity’s future; he had been editor, successively, of several high-ranking publications, including The Illustrated Weekly of India and Hindustan Times; he was bestowed with the highest awards by the Indian government which he returned in 1984 to protest Operation Blue Star against his community, the Sikhs; he was a parliamentarian and was once close to Prime Minister Indira Gandhi. What isn’t available online can be gathered from his autobiography, Truth, Love and a Little Malice, which he wrote at 87. That Singh passionately loved the presence of women is also well documented in his own works: Sex, Scotch and Scholarship (1992), Women and Men in My Life (1995), Declaring Love in Four Languages (1997), The Company of Women (1999). That he was an agnostic is certified in his There is No GOD (2012).

What then can be said about Singh that hasn’t already been said? The space about Singh is densely covered by accounts beginning with his birthplace (Hadali in Pakistan’s Khushab district) to his student life (in Delhi, Lahore, Cambridge, London) to his career in Parliament, and finally to his last crossword puzzle and his last breath, both in the New Delhi apartment block named after his grandfather. More, however, needs yet to be said about Singh—who stood for peace and harmony among religions, communities, and states—in this time when inter-communal and interstate tensions seem to have reemerged in South Asia.

Even as state-provided sandbags protected his apartment building when Singh lived under threat of attack from the Khalsa militants, he remained unbiased, unafraid, and forthright. Once on visiting him, my wife, Bushra, and I found him holding a small darbar of all ages, communities, and persuasions. They engaged in a lively discussion on the future of India and South Asia. Even as tempers outside were high, the atmosphere around Singh, despite the contrariness of views being freely expressed, was relaxed. The urgency of the moment was not lost on the discussants, and despite the personal jeopardy shadowing him, Singh wasn’t flustered one bit. His own interjections were precise and pointed. Silence pervaded every time he spoke. He was their guru. He was their Buddha.

Not enough has been said or written about Singh’s passion for Pakistan. In stressful times, this was unique for an Indian. I myself did not recognize the depth of this emotion until August 2006, when Amarinder Singh’s Punjab government was to present him with the Punjab Rattan Award at New Delhi’s seven-star Oberoi Hotel. By this time Khushwant was in the 10th decade of his life and had become somewhat imperious. During the ceremony’s preparation, he made it clear he wouldn’t allow anyone else to address the literati gathering. When the organizers pressed him to allow at least one other person to speak about him, he finally made a concession: he nominated a Pakistani, me, to share the glory of that rostrum with him.

Khushwant Singh’s love for India’s perceived adversary, Pakistan, was abject and unconditional. He had the courage to advocate the Pakistani point of view even in the roughest of times. As news came of his cremation, I remembered that he had once said to his devotees in my presence that he would like to be buried in the Muslim graveyard in Hadali.

Singh was the quintessential Renaissance Man. He hated conflict. He hated migration and the uprooting of populations. He preached plurality and coexistence. He was an advocate of nonviolence. He believed in giving the benefit of doubt to everyone. He always said that the worst among us was also capable of doing deeds of goodness and valor. His Train to Pakistan (1956)—an all-time bestselling novel set in a typical albeit fictional border village, Mano Majra—poignantly depicts the tragedy of Indo-Pakistan migration in the summer of 1947. The well-etched characters provide realism to a background of heat, dust, blood, pain, and tragedy. The magistrate Hukum Chand, the educated atheistic social worker Iqbal Singh Bhinder, the rustic but brawny local gangster Juggut Singh all play out their roles to establish the sheer madness of communal strife. “The bullet is neutral,” Singh wrote, “It kills the good and the bad, the important and the significant without distinction.”

At a time when South Asia is still under the clouds of the Mumbai attacks, is witnessing the perennial pain of Kashmir, and may see the reemergence of communal tensions through electoral processes, Khushwant Singh is needed even more. But he is gone. His teachings of nonviolence, coexistence, and plurality remain—and they must endure.

Lawyer and author Ahsan is the opposition leader in the Senate and has previously served in the federal cabinet. From our April 5, 2014, issue.

‘A Whole Group of Incompetent People’