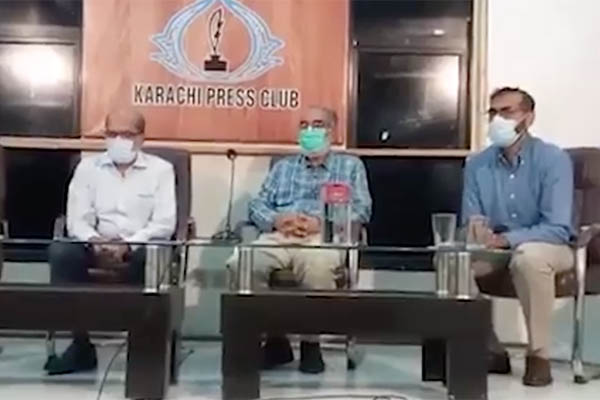 Healthcare professionals on Monday criticized the government, as well as the public, for failing to adopt preventative measures amidst Pakistan’s second wave of the novel coronavirus, adding that the “irresponsible” behavior of major political parties was steering the country toward a massive crisis.

Addressing a press conference in Karachi, health workers linked to the Pakistan Islamic Medical Association (PIMA) said that if the public’s disregard for standard operating procedures (SOPs) to curb the pandemic continued, the only choice left would be a nationwide lockdown to protect the medical infrastructure from total collapse.

Claiming that “hundreds” of doctors and paramedics had already lost their lives to COVID-19—the government officially acknowledges 100 deaths due to the virus, adding over 10,000 healthcare workers have been infected thus far—the officials said it would become difficult to convince people to continue performing their duties if the public did not adopt SOPs.

“We are facing the second wave of COVID-19, which is proving to be highly lethal,” said Sohail Akhtar, a prominent pulmonologist. “We are running out of space and beds at our leading health facilities in Karachi,” he said, adding that with thousands testing positive for the virus daily, hundreds required hospitalization.

Misbahul Aziz, a former president of PIMA, lamented that barely anyone was wearing face masks in public. He urged the government to exercise its writ, including imposing heavy fines or similar penalties, to make the wearing of masks in public spaces mandatory. “If people are not following the SOPs, kindly implement a strict lockdown as not only common people but a large number of doctors are getting killed while treating patients at hospitals and their clinics,” he said, adding that business timings should also be restricted to discourage crowds in markets and offices.

Dr. Faiyaz Alam of the Bilquis Naz Hospital slammed Prime Minister Imran Khan for not including Sindh in the government’s health insurance scheme “Why are you [P.M.] not issuing Sehat Insaf Cards to the people of Karachi?” he said. Health, under the 18th Amendment, is a provincial matter and any health insurance project would require the backing of the Sindh government—not just the center.

A fourth doctor warned that there was a rise in re-infections of COVID-19, and urged those who had been infected earlier to avoid becoming complacent. He also urged the government to commence the cheaper, quicker Antigen Screening tests to help determine the true spread of the virus.

Pakistan’s confirmed cases of the novel coronavirus have climbed to 423,179. On Tuesday, it reported 89 deaths due to the pandemic, the highest single-day toll since July 4. The government maintains that it will not shutter any economic activity, adding that if the public adopts SOPs, the virus’ spread and lethality would subside.