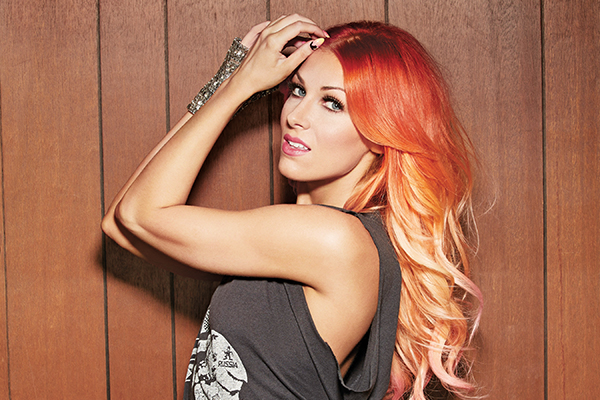 Songwriter Bonnie McKee strikes out on her own.

Bonnie McKee has been called pop music’s “secret weapon” and “best-kept secret.” Since 2009, she has written or co-written an astonishing string of smash hits—the kind of inescapable radio sensations that embed themselves in your head, playing on a loop. She has written for Ke$ha, Kelly Clarkson, Adam Lambert, and Christina Aguilera. She penned No. 1 hits for Britney Spears (“Hold It Against Me”) and Taio Cruz (“Dynamite”). She’s partly responsible for the unprecedented collection of No. 1’s on Katy Perry’s 2010 album Teenage Dream: “California Gurls,” “Teenage Dream,” “Last Friday Night (T.G.I.F.),” and “Part of Me.” Perry’s latest chart-topper, the empowerment anthem “Roar,” is also McKee’s handiwork.

“It was definitely difficult for me, wanting to become an artist,” McKee says about watching others’ fame skyrocket on the back of her songwriting. After clandestinely gilding albums with her Midas touch the past four years, McKee’s ready for the secret to come out.

“American Girl,” the lead single off McKee’s debut album—expected in early 2014 from Epic Records—appropriates some of her hit-making prowess for herself. The song went up on YouTube in July with viral-video-making fanfare, including a red carpet’s worth of McKee’s celebrity friends—from Ke$ha and Perry to Joan Rivers and George Takei—lip-syncing to the track. The video was as much a love letter to McKee from the chorus of industry players rooting for her breakout as it was a ploy to drum up interest in her solo career launch.

Songwriter-to-superstar is a path traveled with increasing frequency recently, with Bruno Mars, Ke$ha, and Lady Gaga all penning hits for others before stepping up to the mic themselves. Still, future stardom isn’t a foregone conclusion. For every Bruno Mars, there is a songwriter who has failed at the endeavor. One of the most famous cases is Kandi Burruss, who wrote hits like the Grammy-winning “No Scrubs” for TLC, “Bills, Bills, Bills” for Destiny’s Child, and “There You Go” for Pink, only to have her solo effort, 2000’s Hey Kandi, flop. (She’s currently a regular cast member on The Real Housewives of Atlanta.)

Dressed in a leather crop vest to go with the leather glove on her left hand, cow-print leggings, and neon-pink pumps that match her neon-pink lipstick, McKee, 29, is a style smorgasbord of the artists she grew up worshiping: early Madonna, Billy Idol, Axl Rose, and even Carole King. Her Hollywood Hills home, too, resembles the set of one of those stars’ music videos—candy-colored walls and furniture, brimming with pop iconography, and decorated with vintage Technicolor set pieces. It’s a fitting abode, considering McKee’s mantra: live life like you’re starring in a music video.

Interestingly enough, her career trajectory has been perfectly written to fit an installment of Behind the Music. McKee was kicked out of school in the ninth grade, when, as luck would have it, she had just finished recording a demo as part of a high school project. She “knew someone who knew someone who knew someone in L.A.,” who got the demo into the hands of local radio DJ Nic Harcourt. He played it. A bidding war started. A record deal with Warner Bros. happened. At 16, McKee moved from Seattle to Los Angeles. “I won the lottery,” she said. “I was invincible. I believed all my problems were gone and I finally made it, that L.A. was my answer to everything.”

The release of her first album, Trouble, in 2004, however, was hardly charmed. It barely registered in the industry. “The album ended up being more singer-songwriter-y and less pop,” she says. It was “the girl stuck behind the piano” at a time when “the kind of Michelle Branch and Avril Lavigne thing was dying down.” McKee wanted to be like Britney and Christina, but the music she was writing was dark and tortured. “I hadn’t figured out how to translate that.”

She began work on a follow-up album, only to get radio silence from the label. Ignored and depressed, she spiraled. She began using meth. One misguided night, she purchased a dagger from a smoke shop on Hollywood Boulevard. It had a tiger on it with a jewel in the eye. She drove to Warner Bros.’ then-CEO Tom Whalley’s house in the middle of the night and stabbed her demo CD onto a tree right outside his front door. She scrawled “Platinum, baby!” in lipstick on his car. “It was just an act of desperation. I needed to get his attention,” she says. “Needless to say, I got dropped.”

McKee’s second chance came when her boyfriend Oliver “Oligee” Goldstein, one half of the electronic duo Oliver, helped her land a meeting with Pulse Recording. She actually used the three songs from that demo she stuck onto the tree to land the deal, becoming one of Pulse’s first publishing signings. Her job was to meet with artists, producers, and other songwriters and collaborate on new tracks. It was, in its own way, a huge break, even though it didn’t seem that way at the time. “I had never really co-written,” she says. “I thought it was weak or something if I needed to collaborate.”

By the time she was brought in to write on Teenage Dream with Perry, she was broke. “Like, really broke,” she says. The two had met years earlier, when they were both penniless songwriters hawking their clothes at a Los Angeles thrift store for enough money to buy dinner at Taco Bell—only since then Perry had gone on to score one of the most buzz-worthy debuts for a new artist (“I Kissed a Girl”). Those Teenage Dream sessions turned out to be career making for both parties. “I think the key to writing hit songs is simplicity,” McKee says. “Try to say something familiar in a unique way, so that it’s sing-along-able, even if you don’t speak English.” Her song “American Girl” abides by that rule, and nails that rallying cry for endless summer and I-don’t-give-a-bleep empowerment. The opening lines: “I fell in love in a 7-11 parking lot/Sat on the curb drinking Slurpees mixed with alcohol.”

“I always thought she was an incredible songwriter,” Josh Abrahams, co-founder of Pulse, says. “But somehow she wasn’t writing the right songs for where she was at in her life,” he says of her first album. In the end, cutting her teeth in sessions with stars like Perry may give McKee the advantage in breaking out this time around. “Bonnie’s learned a lot from being in the room with these great writers and artists,” Abrahams says.