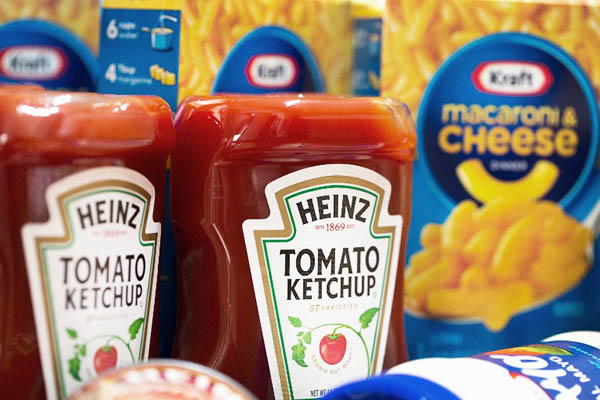 The two staples of American convenience foods are expected to have around $28 billion in annual sales.

For fans of traditional American gastronomy, it’s a Wall Street match made in food heaven. The mega-merger of U.S. icons Heinz and Kraft Foods announced Wednesday will bring together classic staples ketchup, hot dogs, processed cheese and a whole host of other top-selling convenience foods under one roof.

The deal, forged by investment guru Warren Buffett’s Berkshire Hathaway and 3G Capital, which own Heinz, will assemble the world’s fifth-largest food company, with around $28 billion in annual sales.

“By bringing together these two iconic companies through this transaction, we are creating a strong platform for both U.S. and international growth,” said Alex Behring, chairman of Heinz and the managing partner at 3G Capital.

The dividend represents a 27 percent premium to Kraft’s closing price Tuesday. The deal has been unanimously approved by the companies’ boards of directors.

“This is my kind of transaction, uniting two world-class organizations and delivering shareholder value,” Buffett said in a statement. The chairman and chief executive of Berkshire Hathaway is considered one of the world’s savviest investors.

Buffett told CNBC television that the deal is good for Kraft investors. “When we made the deal, we felt that the Kraft shareholders would come out very well. I think, so far, the market feels the same way,” he said.

Shares in Kraft surged 41.6 percent to $86.85 in morning trade on the Nasdaq exchange.

Behring will become chairman of the merged company, and Heinz chief executive Bernardo Hees will be its CEO. Behring is one of five founders of 3G, which is led by Jorge Paulo Lemann, one of the world’s richest men. The deal comes three years after Kraft, seeking to build shareholder value, spun off its snack and crackers division in 2012, creating separately traded Mondelez International.

But revenues have been flat at $18.2 billion in each of the past three years. Net earnings fell from $2.7 billion in 2013 to $1.0 billion last year. The new owners said they would build more value through synergies that will produce $1.5 billion in annual cost savings.

Buffett told CNBC that he likes to work with 3G. “They’re not buying things to sell… That is not 3G’s strategy. I don’t even think it’s proper to call them a private equity firm. They’re buying to keep just like we’re buying to keep.”

Berkshire’s holdings are vastly diverse, including insurance and railways, but the group has its own sizable investments in the food industry. It has See’s Candies and International Dairy Queen, and is the largest shareholder in Coca-Cola. “While not quite on the scale of his $34 billion purchase of the Burlington Northern Santa Fe railroad in 2009, Buffett is making a sizable bet that the combined companies can compete in a new marketplace,” said Paul Ausick of 24/7 Wall Street.