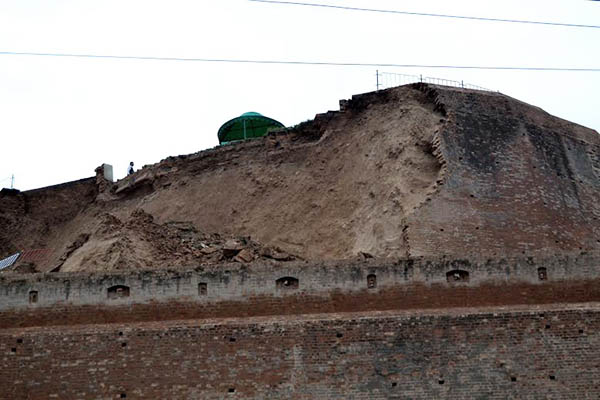 One wall of the historic Bala Hissar Fort lies in ruins after the earthquake.

Many historical landmarks in Pakistan’s north have been severely damaged by Monday’s earthquake.

The 7.5 magnitude earthquake that struck Pakistan and Afghanistan on Monday has wreaked havoc in the region, killing over 350 people and injuring thousands more. Four days after the powerful tremors, the National Disaster Management Authority said it believes it has reached “most of the affected area.” But with the humanitarian crisis under control, authorities in Khyber-Pakhtunkhwa are discovering that the quake may have also caused irreparable damage to the province’s historical monuments.

“Some of the artifacts on display at museums in Peshawar, Chitral, Swat and Dir fell down during the earthquake and were severely damaged,” says Dr. Abdul Samad, director of the Khyber-Pakhtunkhwa Directorate of Archaeology and Museums. The damaged objects are an irreparable loss to Pakistan’s archaeological heritage, he says. “It could take over a week to assess the actual damage and determine how much money will be required for repairs.”

In addition to artifacts stored in museums, historical monuments such as the Bala Hissar Fort and the Mahabat Khan Mosque have also been damaged. The southwestern wall of the fort—currently occupied by paramilitary troops—collapsed during Monday’s tremors, as did the minarets of the Mughal-era mosque, constructed in the 17th century. The Gor-Gathri complex, built by the British in 1912 as the region’s first fire brigade headquarters, now has visible structural cracks, while the already dilapidated house of legendary actor Dilip Kumar is in danger of total collapse.

Many other buildings have also been damaged, including that of Edwardes College, Islamiya College, and the Radio Pakistan office. Other sites of archaeological interest, including Taxila, the Pipplan Stupa, the Jaulian Stupa and monastery, Takht Bhai and Jamal Garhi in Mardan have also been affected by the quake in what has been termed as a “big loss” by Samad.

Goran Sern Laal, a resident of Peshawar and elder of the local Hindu community, said several Hindu temples and historical sites were also damaged by the tremors. “Our buildings were already in a poor state even before the quake. The government should do something to preserve these important sites, which are not only special to our community but for the country itself,” he added.

Khyber-Pakhtunkhwa Information Minister Mushtaq Ghani said the government is aware of the situation, but must allow rescue operations to take precedence. “We are collecting data of affected people and collateral damage,” said Ghani, adding that the provincial government will allocate funds for repairs after a thorough assessment. “These aren’t normal sites. They need special attention and our cultural department will rebuild them to their original form,” he said. 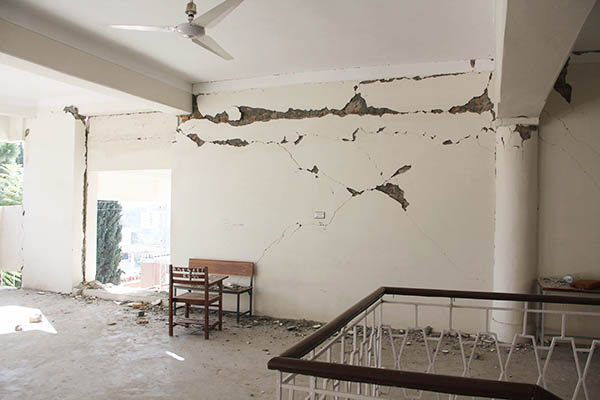 The sorry state of the Government Girls Degree College in Saidu Sharif, Swat after the quake.

In addition to the historical sites, the earthquake has damaged at least 150 school buildings in Swat—hometown of Nobel laureate Malala Yousafzai—alone, with 20 completely shuttered. “There are concerns that 25,000-30,000 students might be affected by the damaged educational institutions,” said Zulfiqarul Mulk, deputy district education officer. There are visible cracks in the walls of Swat’s sole university in Odigram, and the building has been declared dangerous by authorities.

Swat Deputy Commissioner Mehmood Aslam Wazir confirmed the bleak situation, saying survey teams had been dispatched and would soon forward recommendations to the government. The principal of the Government Girls Degree College in Saidu Sharif, Swat, also admitted that her institution had been damaged, but vowed to not let it get in the way of imparting education. “There are some places that appear risky. We are considering alternate arrangements,” she said, “but we will not allow this to compromise education.”