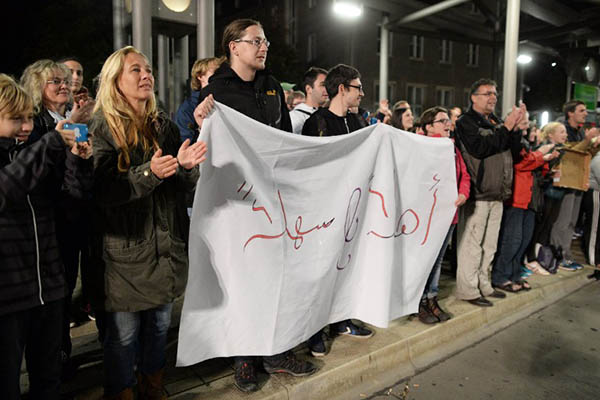 Having braved dangerous journeys to escape war, tired refugees from Syria and other conflict zones were stunned to receive a hero’s welcome as they arrived in Germany over the weekend.

In crowded train stations, hundreds of well-wishers cheered the often baffled newcomers, waving “welcome” signs as the migrants got out of packed trains in Munich, Frankfurt and other German cities.

Crowds of people holding balloons and snapping smartphone pictures gave them water, food and children’s toys as the record influx has sparked an unprecedented volunteer response. “Say it loud, say it clear, refugees are welcome here,” chanted people at Frankfurt’s railway station overnight, as trains arrived with refugees who had traveled from Hungary through Austria.

In the southern city of Munich, Germany’s main hub for arrivals, a 47-year-old local woman in the crowd on Sunday waved to a Syrian family arriving on the latest of dozens of special trains. When the family with three children neared the police barricade looking skeptical, the woman handed them a bag, with chocolates, toys and an envelope inside.

“There’s a bit of money inside,” said the woman in English, before the Syrians, grateful smiles on their faces, were led on to be registered, the next step in their uncertain journey.

Arriving on another train, two boys, perhaps seven or eight years old, pushed out their chests like football stars and beamed smiles as they traversed the throng of applauding people.

“We have more than 1,000 volunteers who have signed up on lists and online and are ready to help,” said one of them, Colin Turner.

From the train station of the Bavarian state capital, the refugees have been taken by bus or local train to temporary shelters, including a school, a tennis center and two halls of the Munich congress center, which has room to house about 1,000 people.

Germany, Europe’s biggest economy, has taken in by far the E.U.’s largest numbers of refugees amid the biggest refugee crisis since World War II. The total number is expected to reach 800,000 this year—four times last year’s total—at a cost of about 10 billion euros to the state.

This weekend alone, some 17,000 migrants were expected to have passed through Bavaria, federal police said.

While Germany has seen a spate of xenophobic rallies and attacks against foreigners, especially in the former communist East, many people believe the country, given its dark wartime and Holocaust history and current wealth, has a special obligation to help refugees.

In an ugly incident Saturday night, several dozen far-right protesters rallied outside Dortmund railway station against the newcomers. Five people were hurt, including three police, when they clashed with anti-fascist activists. However, the main focus was on the far larger crowds of well-wishers in many German cities.

At Frankfurt railway station overnight, food, water and clothes were piled high for the new arrivals, while hundreds of people thronged the platforms. An Egyptian man who gave his name as Mustafa and said he had been living in Frankfurt for 20 years, held up an Arabic-language cardboard sign saying “warm welcome.”

Lara Sabbagh, a volunteer for an organization Kleeblatt based near Frankfurt, acted as a translator for some of the Syrian refugees. She told bystanders to stop taking photographs, saying: “They’re afraid. They say they’ve just fled from their country and their ruler and don’t want to be photographed.”

She added that many of the migrants didn’t “understand all the commotion here. They asked me, ‘What are all these people doing here? What do they want?’ They didn’t understand that people were here to welcome them.”