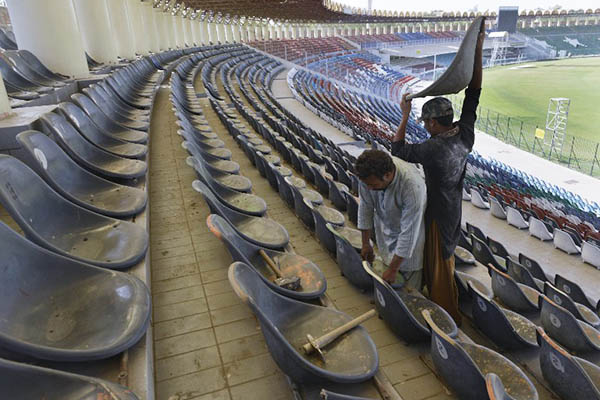 On March 3, 2009, Pakistani cricket suffered a cruel blow when the bus carrying the Sri Lankan Test team was attacked by militants near Lahore’s Gaddafi stadium, leaving eight people dead and seven visiting players wounded. That tragic incident, at the height of the homegrown militant Islamists’ bloody fight against the state, forced the suspension of all international cricket in Pakistan.

No team was willing to risk their safety to visit Pakistan, beginning an unwanted odyssey for the 1992 world champions, who have played most of their “home” matches since 2009 in the United Arab Emirates.

The security situation in Pakistan has improved markedly since the military launched a major anti-insurgent offensive in the northwest last June. And Monday’s announcement that Zimbabwe have agreed to come for a short tour next month has brought hope that big-time cricket could be about to return.

It also is a welcome ray of light for Pakistani fans after the side crumbled to an embarrassing 3-0 whitewash in their one-day series in Bangladesh.

Zimbabwe’s trip is likely to be confined to Lahore and last only a week, but the sight of a Test-status team playing again in Pakistan will send out an important message.

Pakistan Cricket Board (PCB) Chairman Shaharyar Khan was understandably upbeat as his efforts behind the scenes look to be bearing fruit. As well as Zimbabwe, an Australian army team are due in Pakistan next week to play their local counterparts, and Khan hailed the developments as “opening another door” toward full rehabilitation.

“We believe that shortly Pakistan would be hosting age-group teams, ‘A’ teams and women’s teams, and also, once confidence in our security arrangements improves, in due course senior teams as well,” he said.

Khan, in his second tenure as PCB chief, drew on his experience as a former foreign secretary and built slowly, unlike his predecessors who tried to tempt bigger teams to Pakistan too quickly. “The idea was to go for what was doable,” he said.

But Zimbabwe have not arrived yet—their security team is due to visit soon to assess the situation—and even small steps to revive home matches have been stymied at the last minute in recent years. In 2012, Bangladesh twice backed out after agreeing to tour, on both occasions their government declaring that Pakistan was unsafe.

It all means that not only have Pakistani fans been denied any action at home, but also young players have missed out on the chance to groom their skills in familiar conditions.  A new generation of players, including new one-day skipper Azhar Ali and left-arm seamers Junaid Khan and Rahat Ali, has grown up never playing international cricket at home.

PCB Chairman Khan agreed there was “no substitute for cricket at home.”

“The chemistry between the audience in the stands and the players creates an environment which nothing can beat,” he said.

And then there is the psychological strain. Much is made of the stresses put on modern players by long tours abroad, and Pakistan Test skipper Misbah-ul-Haq says it is even worse for his nomadic cricketers. “I salute my players for showing the mental strength to overcome homesickness,” he said. “Being away from their families, it’s a really tough ask and this is also affecting our young and upcoming fans and players who don’t get to see international matches.”