Home Latest News Highlights of the Proposed U.N. Climate Accord

Highlights of the Proposed U.N. Climate Accord 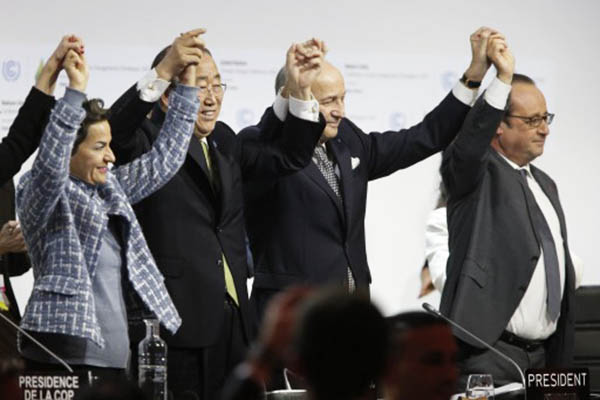 Envoys from 195 nations approved Saturday a historic pact to roll back global warming and shore up defenses against its impacts. Following are the key points in the Paris Agreement:

The agreement identifies climate change as “an urgent and potentially irreversible threat to human societies and the planet.” It notes “with concern” that countries’ existing pledges to curb greenhouse-gas emissions would fail to meet targets for curbing planetary warming.

The purpose is to hold global warming to “well below” two degrees Celsius over pre-Industrial Revolution levels, and to strive for 1.5C if possible.

The world will aim for climate-altering greenhouse gas emissions to peak “as soon as possible,” with “rapid reductions” thereafter. By the second half of this century, there must be a balance between the emissions from human activity such as energy production and farming, and the amount that can be captured by carbon-absorbing “sinks” such as forests or carbon storage technology.

Developed countries, which have polluted for longer, should take “the lead” by taking on absolute emissions cuts. Developing nations, which still need to burn coal and oil to power growing populations, are encouraged to enhance their efforts and “move over time” to cuts. Rich countries are required to provide support for developing nations’ emissions cuts.

In 2018, two years before the agreement enters into force, countries will take stock of the overall impact of what they are doing to rein in global warming, and revisit their carbon-curbing plans in 2020. Some countries had submitted their first round of targets until 2025, and others until 2030.

Once the agreement takes effect, the collective impact of countries’ efforts will be reviewed at five-year intervals from 2023. The outcome will inform countries in “updating and enhancing” their pledges.

Developed countries “shall provide” funding to help developing countries make the costly shift to green energy and shore up their defenses against climate change impacts like drought and storms. Funding must be scaled up, and the agreement says rich nations must report every two years on their finance levels—current and intended.

Moved from the legally binding core agreement to a separate non-binding “decision section,” the document refers to the $100 billion a year that rich countries had pledged to muster by 2020 as a “floor.” The amount must be updated by 2025.

Low-lying island nations and poor countries most at risk from climate change-induced sea level rise and other impacts, have won recognition of the need for “averting, minimizing and addressing” losses suffered.