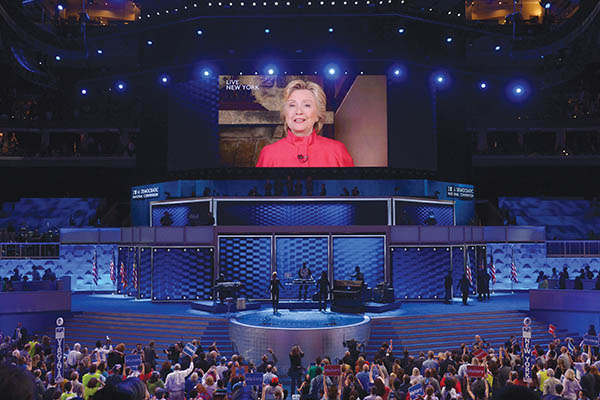 Bill Clinton appears at Democratic National Convention to make the case for his wife’s presidency bid.

Hillary Clinton made history on Tuesday by becoming the first woman to win a major U.S. political party’s White House nomination, earning the backing of convention Democrats and primetime plaudits from a presidential superstar: her husband Bill.

The 68-year-old former first lady, senator and secretary of state took a monumental step on her quest to become America’s first female commander-in-chief, by besting party challenger Bernie Sanders. After a tumultuous convention opening, which saw Sanders and Clinton supporters trade jeers and chants, loud cheers erupted as Clinton passed the 2,382-delegate threshold needed for the nomination, setting up a November showdown with Republican Donald Trump.

Hours later, another historical moment greeted the Clintons, when a former president took the stage to intimately make the case that his wife was the compassionate and capable change catalyst America needed.

“She always wants to move the ball forward. That is just who she is,” Bill Clinton said of his wife, keeping an audience of thousands of delegates rapt throughout his 45-minute speech, which marked the convention’s halfway point. “For this time, Hillary is uniquely qualified to seize the opportunities and reduce the risks we face, and she is still the best darn change-maker I have ever known.”

Although the roll call outcome was a foregone conclusion, the state-by-state vote saw rowdy displays on the convention floor. A handful of diehard Sanders delegates fumed over their candidate’s defeat, but they were drowned out by ecstatic Clinton supporters. Several wept and embraced.

Sanders took the floor in a bid to unify the party, drawing deafening cheers and a chorus of “ayes” when he called for Clinton to be “selected as the nominee of the Democratic Party for president of the United States.”

Delegates thrust placards in the air, forming a mosaic of “H’s” across the arena.

Hillary Clinton made a stunning appearance by video after her husband’s speech, with an image comprised of the faces of former presidents, all men, shattering like glass to show the nominee. “What an incredible honor that you have given me,” she said to roars from the crowd. “This is really your victory,” she added. “And if there are any little girls out there who stayed up late to watch, let me just say, I may become the first woman president but one of you is next.”

Bill Clinton, a Democratic icon at 69, meanwhile reminded the audience why he is still considered such a spellbinding speaker as he sought to transform how Americans see Hillary. While he made a forceful case for Hillary as president, his speech was heartfelt and folksy, exposing the personal side of a woman most adult Americans have known for a quarter century.

“In the spring of 1971, I met a girl,” Bill began as he warmly recalled their budding romance and his “awe” at Hillary’s smarts, strength and persistence in doing public good. He alluded to Clinton’s election rival, although not by name, by pointing to some of Trump’s more controversial policy positions, including his call to ban Muslims from entering the United States.

“If you’re a Muslim and you love America and freedom and you hate terror, stay here and help us win and make a future together,” Clinton said to huge applause. “We want you.”

The Democratic convention has been convulsed by revelations over leaked Democratic National Committee emails that showed party bias against Sanders. Trump took the usual shots at Clinton during a speech in Charlotte, North Carolina, calling her “Crooked Hillary” and charging that her use of a private email account as secretary of state “put America’s entire national security at risk.”

But Bill Clinton took a veiled swipe at Trump and his vision for change, and congratulated Democratic delegates for nominating “the real” Hillary, not the “cartoon” version portrayed by Republicans. “Life in the real world is complicated, and real change is hard,” Clinton said. “Today, you nominated the real one.”

Speakers also addressed the differences between Clinton and Trump on women’s rights, including Cecile Richards, the head of women’s healthcare provider Planned Parenthood. “Women are going to be the reason you’re not elected president,” Richards said of Trump.

Bill Clinton’s speech struck a unifying tone, an all-important quest by organizers ahead of President Barack Obama’s address to the convention on Wednesday and Hillary Clinton’s acceptance speech on Thursday.

But despite Sanders calling on his flock to get behind Hillary, his self-styled “political revolution” appears to have transformed into a revolt. Tace Geesaman, a Nevada delegate and single mom, walked out after Sanders’s plea feeling betrayed. “There’s no unity in the party,” she said of the Clinton camp. “They’re talking at us, they’re telling us to fall in line,” she added. “We didn’t come to this convention to just fall in line.”

But Bill Clinton laid out the options before voters, saying there were “clear, achievable, affordable” Democratic goals at stake in November. “That’s why you should elect her because she’ll never quit when the going gets tough,” Bill said of Hillary. “She’ll never quit on you.”