‘Hilly Prison’ for Refugees in Nepal 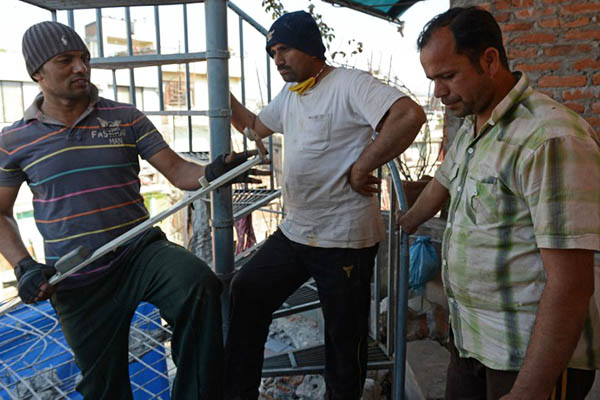 Rights groups decry rules that charge exorbitant visa fees of refugees, preventing them from leaving for other countries.

Amir Hussain, a Rohingya Muslim, lost a dozen members of his family to sectarian violence in Myanmar last year. He fled to Nepal where the country’s policy on refugees has left him among hundreds trapped, jobless and mired in debt.

He lives with his family in a tiny room in a house where walls have collapsed, water drips through holes in the roof and an open concrete stairwell is a potential deathtrap for his two young children. “If I go back to Burma (Myanmar), I will be killed,” he said. “When I came to Nepal, I felt safe but we found many problems.”

Hundreds of desperate refugees are trapped in Nepal, told they must pay fines as high as $100,000 before they can be resettled to the West. Barred from working, many have spent years waiting for the government to let them leave. The biggest problem: that despite being offered new lives in the West by the U.N.’s refugee agency, most refugees—who number around 400 in the capital Kathmandu—have been trapped here for years by Nepal’s rules, which are decried by rights groups.

Nepal is neither a signatory to the 1951 U.N. Refugee Convention, nor has it established a clear legal framework to deal with asylum-seekers or refugees. The refugees are fined $5 for every day they overstay their 30-day tourist visa and the debt must be cleared before they leave. Many families have amassed tens of thousands of dollars in fines. The government does not waive the visa overstay fee even after the UNHCR has organized resettlement, which is usually to the United States or Canada. And since the government does not recognize their refugee status, they must find the money while being barred from working, leaving them in a perpetual limbo.

Nawid Ahmad, 42, from Lahore in Pakistan, has a fine of over $100,000 hanging over him and his family. He is a member of the Ahmadi sect of Islam, which is officially heretical in Pakistan.

Ahmad decided to leave in 2004 after he was shot four times—in the leg, chest and hip—in an unprovoked attack while out shopping. “I miss everything. My heart and soul is in Pakistan, but we could not stay,” he said at his home in Kathmandu.

He came with five younger brothers and they added wives and children. Most have already been granted asylum in the United States, but to leave they must find the enormous visa fee, which is an impossible task. “This place is beautiful,” he added, gesturing toward the snow-capped Himalayas that lined the horizon. “But for us, it has become a hilly prison. We just wait and wait and wait.”

Even more tragic is the case of the Somali community. Many came in 2007 when smugglers promised them a new life in the Italian city of Naples

“When we arrived here, the smuggler said it was just a stop-over. In the morning, he had disappeared,” said ‘Khalid,’ who fled Mogadishu after his father, brother and sister were all killed by a rival clan. He requested that his real name not be used. He has been offered relocation to the U.S., and is looking for a loan shark to pay the $19,000 in visa fines he owes for his family, a tactic employed by many refugees desperate to leave.

The loan could mean a long period of indentured servitude for Khalid, but he says: “I won’t hesitate. My children will get a better education and better life.”

All are grateful for the peace and religious tolerance of Nepal. Although there is occasional discrimination—particularly against dark-skinned Somalis—it is nothing compared to the brutal violence they faced at home. But the threat to life and limb has been replaced by a new, psychological torment that results from the long, idle days.

“I have lost my golden years to this place,” said Asif Muneer, 42, who ran a furniture business in Lahore before coming here in 2004. Friday prayers have just finished and he sits with a group of Ahmadis in the rented home they have turned into a mosque.

“Sometimes I lose my mind—I can’t sleep, can’t eat. Our life is like a pendulum, just swinging back and forth and never going anywhere,” he said. His fine has climbed to $39,000.

The refugees survive on a meager allowance from the UNHCR, which has lobbied the government for years over the visa fee issue.

The government says it has twice waived overstay fees for “some four dozen” urban refugees. “However, we consider these people to be illegal immigrants, not refugees. Not waiving the visa fee is in line with our laws,” said Shankar Prasad Koirala, head of the government’s co-ordination unit for refugee affairs.

Nepal has waived the fees for thousands of Bhutanese refugees, all of ethnic Nepalese origin—their resettlement to the West has been one of UNHCR’s greatest success stories.

Back at the teashop, Khalid, the Somali, admits he’s tired of talking about his problem. “Sometimes I picture myself out of this situation. It will be such a happy day when the plane takes off,” he said. “But instead, we are here, with nowhere to go, and we feel totally alone.”