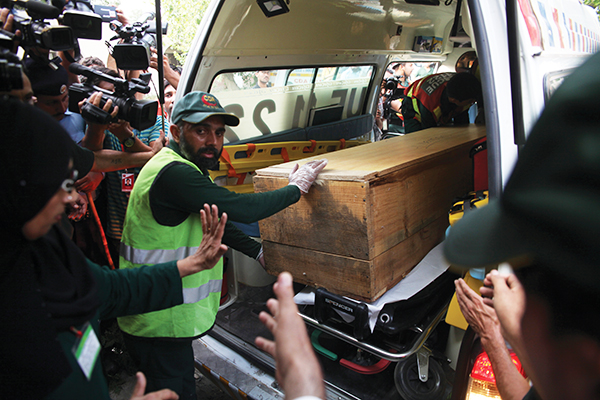 The Taliban’s newest franchise, Junood al-Hafsa, announced itself to the world on June 23 with the mass murder of 11 people—including 10 foreign mountaineers—in Pakistan’s remote and usually peaceful Gilgit-Baltistan region. The dead include two Chinese, three Ukrainians, two Slovakians, a Lithuanian, a Nepali, a U.S.-Chinese dual national, and their Pakistani guide. The group was gunned down at a base camp for Nanga Parbat, one of the world’s highest peaks. The killers were disguised as policemen. Al-Hafsa, the Taliban declared, will hunt down and kill foreign tourists in Pakistan to avenge the deaths of their killer colleagues from U.S. drone strikes. As a result, all climbing expeditions have been cancelled indefinitely and Islamabad commenced evacuation of foreigners from Pakistan just hours after the Diamer killings became known. The tragedy is a death knell for the struggling tourism industry of the region, and it could, as the government noted, roil Pakistan’s foreign relations. Beijing has urged Islamabad to guarantee the safety of its citizens, many of whom are working on infrastructure projects funded by the Chinese government for Pakistan, and Ukraine has demanded compensation for the victims’ families. After 9/11, Pakistan found itself on the travel advisories of several countries, including the U.S. and U.K. With this latest attack, it will make its way onto several more.