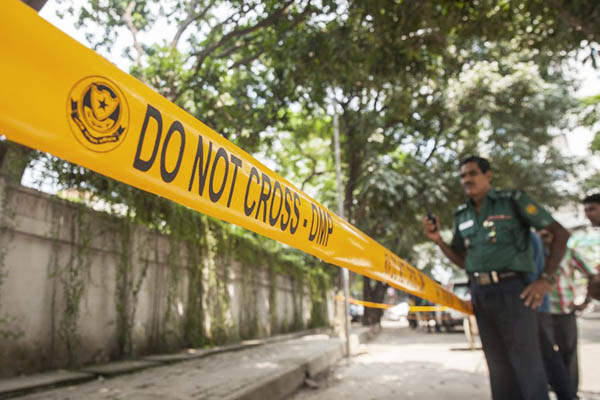 A 70-year-old Hindu priest was found murdered in western Bangladesh on Monday, with his head nearly severed from his body, in the latest in a series of attacks on minorities by suspected Islamists.

Farmers discovered the body of Ananda Gopal Ganguly near his home in the village of Noldanga in Jhenidah district after he had gone missing on his way to morning prayers. Although there was no immediate claim of responsibility, investigators said the killing bore the hallmarks of recent attacks by Islamist extremists who have carried out 10 other similar killings in the last 10 weeks.

“He left home this morning saying that he was going to a Hindu house to offer prayers,” said the district’s deputy police chief Gopinath Kanjilal. “Later farmers found his near-decapitated body in a rice field. We do not know the identity of the killers. His body was found in an isolated area and we do not believe there any witnesses to the killing. But the pattern of the killing is similar to ones carried out by local Islamist militants in recent time.”

Bangladesh is reeling from a wave of murders of secular and liberal activists and religious minorities that have left more than 40 people dead in the last three years. Most of the recent attacks have been claimed by the Islamic State organization or the local offspring of Al Qaeda.

Prime Minister Sheikh Hasina’s government has however blamed homegrown Islamists for the attacks, rejecting claims of responsibility from the I.S. and a South Asian branch of Al Qaeda.

Experts say a government crackdown on opponents, including a ban on Bangladesh’s largest Islamist party Jamaat-e-Islami following a protracted political crisis, has pushed many towards extremism. Jamaat-e-Islami is a traditional ally of the main opposition Bangladesh Nationalist Party whose leader, two-time former prime minister Khaleda Zia, is facing a raft of charges in connection with deadly fire-bombings.

Victims of the attacks by suspected Islamists have included secular bloggers, gay rights activists and followers of minority religions. Although it is officially secular, around 90 percent of Bangladesh’s 160 million-strong population is Muslim.

Ganguly’s murder comes only two days after a Christian was hacked to death after Sunday prayers near a church in northwest Bangladesh in an attack claimed by I.S. A Hindu shop owner was also hacked to death outside his store in the northern Gaibandha district late last month. I.S. said it was behind that killing as well.