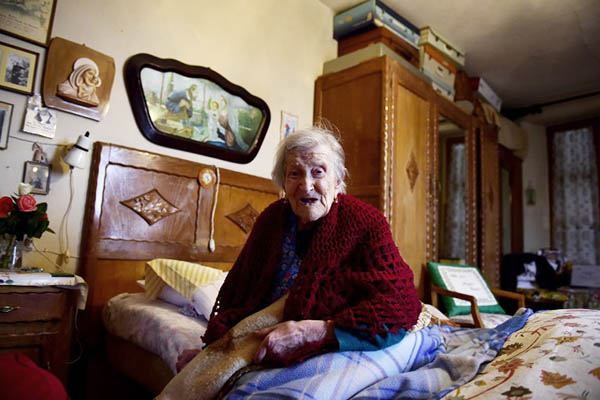 Italy’s 116-year-old woman hopes to see the 2020s and becomes the oldest human being on record.

As a young woman in the roaring 1920s, the world’s oldest living person loved to go singing and dancing. Now 116-year-old Italian Emma Morano’s next challenge is to see in the 2020s and become the oldest human being on record.

The last known surviving child of the 19th century is enjoying the spotlight after succeeding American Susannah Mushatt Jones, who died last week, as the oldest person on the planet. And on the evidence of AFP’s visit to her this weekend, Morano could very well go on long enough to surpass Jeanne Calment’s record.

The Frenchwoman died in 1997 at 122 years and 164 days, the oldest recorded age achieved by a human being. Morano was having the first of her two daily naps when AFP came calling at her tiny second-storey apartment in Verbania, a small town on the shores of Lake Maggiore in northern Italy.

But her carer had no doubt that she would want to have her picture taken once again.

Barely a few seconds after being woken, she was alert, sitting up on the edge of her bed and smiling for the camera.

Clutching an embroidered pillow she received when she celebrated her 116th birthday last year, she spoke in a barely audible but unwavering voice. “I’m doing fine, who are you?” she said, confirming comments from her doctor and her few surviving relatives that becoming a world-beater has boosted her already remarkable vitality.

Morano’s extraordinary longevity—and more broadly Italy’s high number of centenarians—is a subject of much fascination among scientists. The eldest of eight children, Morano was born on Nov. 29, 1899. She has outlived all her younger siblings, the last sister having died five years ago at the age of 102.

She is now looked after by two elderly nieces with the help of a Colombian carer.

Morano cannot walk, does not see well enough to watch television and has reportedly not left her flat in 25 years. For most of that time, Morano has been visited once a week by her doctor, Carlo Bava, who broke the record-breaking news to her and reported that his patient had been extremely proud to hear it.

Bava has helped draw the world’s attention to the unconventional diet which has underpinned—or at least not prevented—his patient from living to such an old age.

Contrary to all received medical wisdom, Morano has thrived despite largely eschewing vegetables in favor of a diet that features at least one raw egg a day and regular portions of raw minced steak. Her liking for pure protein goes along with a sweet tooth: she enjoys late night snacks of apple puree and biscuits and visitors often come bearing Colomba, an egg and butter-rich cake Italians associate with Easter, or Pannetone and Pandoro, traditional Christmas treats of a similar ilk.

In an interview last year Morano attributed her longevity to having left a violent husband in 1938, shortly after the death in infancy of her only son. It was always an unhappy marriage. Years before, her true love had gone off to fight in World War One and never came back.

Leaving a husband was no easy thing to do in the Church-dominated Italy of the 1930s and Morano had no choice but to work in a factory producing jute sacks to support herself. The egg habit dates from when she was diagnosed with anaemia at 20 and a doctor advised her to eat three a day, two raw and one cooked.

She maintained that regime for 90 years and she remains a creature of habit, rising at eight every day, lunching at 11 and having dinner at six.

Both main meals are followed by long naps and Morano retires, after her snack, every night at 11:00 p.m. It is a routine she intends to maintain, she said on her 116th birthday in November. “I’m fine, I’m fine and as long as it stays like that I will remain with you.”