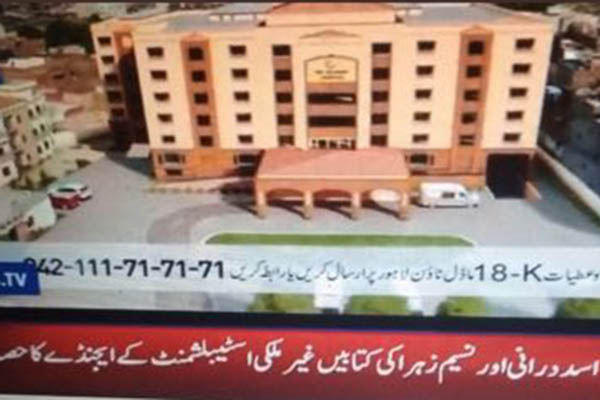 Every time someone writes or says something that is critical of military’s blunders, (s)he is labeled as a pawn in some hybrid war; let’s cut that crap

Apparently, as part of the much-hyped hybrid war against Pakistan, two eminent Pakistanis, one a former three-star general, who headed two premier intelligence agencies—Military Intelligence and, yes, Inter-Services Intelligence Directorate—and another a leading writer, journalist and a public intellectual, have wittingly or unwittingly played into the hands of the hostiles and Charlie’s aunt by putting out two critical books.

In case you haven’t worked out who they are, you are not a social media bot, troll, a keyboard patriot or a certain type of former military officer whose post-retirement, patriotic angst is delivered through warnings about hybrid war on WhatsApp and Facebook groups, thank you.

One is Lt-Gen. Asad Durrani (retd.); the other is Nasim Zehra.

Have known both for many, many years. Have supped with them, done tv programs, edited their writings, participated in conferences with them at home and abroad, seen and heard them defend and sweat for Pakistan. They are among the finest this country has to offer.

General Sahib is very senior and I got to know him in 2002 or ’03 at a Pugwash Roundtable in Delhi. He was never in a hurry to speak. In fact, he would sit somewhat slouched in his chair with his head leaning forward and appeared to be asleep. And yet, you would know how sharply he was listening to everything when at some point he would decide to speak: short, clear sentences, sharp thought process dissecting though the issue. I marked him as one of the smartest generals I had come across.

He is a gunner officer. My running joke with him is that gunners divide the world into two categories: other gunners and targets. He has a wry sense of humor and loves P.G. Wodehouse (that obviously gave us much to talk about when we weren’t discussing strategy).

Nasim, senior to me, has also been my colleague at Capital TV. I used to read her in the nineties. But my relatively closer interaction with her was in late ’98, post-nuclear tests, when Dr. Shireen Mazari invited me to a panel discussion on the nuclear tests. I don’t think Nasim agreed with the content of my presentation! My next meeting with her was in a coffee shop at Harvard in 2003 when I was there for a conference and Nasim was a fellow there, working on her book on the Kargil War. Yes, that’s how far back the book goes, though cretins and trolls—usually one and the same—are implying a sinister conspiracy with reference to the timing of her book, as also General Durrani’s with former Research and Analysis Wing chief, Amarjit Singh Dulat (the latter book comprises conversations between Durrani and Dulat).

But let’s get back to this hybrid war tag. Some time ago I wrote about it after the current Army chief, General Qamar Bajwa, referred to the concept. The term hybrid has been flogged to the point where its loose usage has deprived it of any meaning. It has also given a ruse to those who want to cover-up facts and stem dissent to refer to any critical appraisal, any protest, any talk about rights as a manifestation of hybrid war. That is, of course, pure bunkum.

It’s like Carl von Clausewitz’ schwerpunkt, mistranslated as Center of Gravity (COG) when it actually means “weight of focus or point of effort”. Militaries across the world use the term COG without ever figuring out whether the concept pertains to the adversary’s weakest point or the strongest—and the debate continues. The Austrian army knows better and uses Gravitationspunkt for COG, which is the correct translation, though that doesn’t help much in terms of capturing this elusive concept.

So, what exactly have Durrani and Nasim done? The former has a conversational book out where he and Dulat talk about intelligence work, R&AW and ISI, their differences and commonalities, other intelligence agencies, India-Pakistan relations, the Kashmir dispute and strategies adopted by R&AW and ISI et cetera.

The book (I have gone through two-thirds of it) is very interesting in terms of insights, though it drags at points. Since Durrani has been called in by General Headquarters to explain some of his comments in the book, it’s ironic that to a question about how the ISI feels about his interaction with Dulat, Durrani responded by saying that “No one has ever talked to me on this subject… never once was I cautioned… institutions… must have had enough confidence in my ability to hold my own… we have never suffered from paranoia on such matters.”

Actually, we have and continue to, which is why we get ‘friendly’ advice through calls from ‘number withheld’ connections if we are lucky and get disappeared if we are not. But now a former chief of MI and ISI is being called in to explain what he said and why he said it. Simultaneously, there’s a campaign against him on social media.

There’s a twist here too. When former and disqualified prime minister, Nawaz Sharif, gave an interview to Dawn, the military ‘requested’ Prime Minister Khaqan Abbasi to convene a meeting of the Cabinet Committee on National Security. The post-meeting press release rejected Sharif’s statements and called them a fabrication. The warrior social media was already in overdrive, as were TV channels. With the Durrani-Dulat book out, the PMLN social media activists got into play with memes and questions about what Durrani had said compared to what Sharif had said. It was and is the generic expression of tum kaho tau sach; hum kahaiN tau what the %^&* and as with such memes, has since gone viral.

The reality is that what Durrani has said is known, for the most part—and in some cases more—to those who observe these developments and analyze them. Ditto for what Sharif said. The value of the book of course is in how certain interactions were taking place and how intelligence agencies on both sides were analyzing the ‘other’.

In the West, especially in the United States, such books, debates and critical analyses are common. Going by the moronic definition of ‘hybrid war’ in this country, the U.S. must be the biggest victim of hybrid assaults.

Nasim’s book, which I have scanned in totality but read halfway, offers a much-needed analysis of Kargil War where the Kargil Cabal (Nasim uses the term clique, which is polite) led Pakistan into an operational and strategic cul de sac. It is a sober assessment, based on interviews with dozens of decision makers, military and civil, and also those in the field. Unlike India, which put together a Kargil Commission under late K Subramaniam whose report is widely available, Pakistan made no such attempt to detail what happened, who did what and why, how many fine soldiers and officers we lost and to what end. The Cabal generals either ensured that no one discussed Kargil (yes, a taboo ops even at Command & Staff College and NDU) or lied through their teeth. For some years now, Kargil has begun to be discussed at military institutions. That’s how it should be. Of the 1965 War, late Maj-Gen Shaukat Riza wrote in his book: “Somehow we had convinced ourselves that our strategic objectives were holier than India’s.”

That mindset dragged Pakistan into a limited war again. Why? Because we refuse to analyze our mistakes and cover them up instead; because every time someone writes or says something that is critical of military’s blunders, (s)he is labeled as a pawn in some hybrid war; let’s cut that crap.

Result: we never learn from mistakes of the past. This is not a review of Nasim’s book, which I shall do in detail, but enough to say that I wish I had the patience and diligence to write what Nasim has managed to, despite her other commitments that prolonged the completion of a book that she had begun working on in 2003 and which she worked through in fits and starts.

We have now reached a point where we need honest, soul-searching ghaddars more than the charlatans and hoaxers whose patriotic grotesqueries are pushing us down a bottomless perdition. C’mon, fellas, there’s more to a nation-state than the size of the national flagpole (pun intended).

A very relevant piece for the times, and about time too. It would be interesting to see an analysis of why the military institution(s) (esp. the army) think and operate in this manner when it comes to civilians.

An asshole of highest order you are haider. Keep the shit up ????