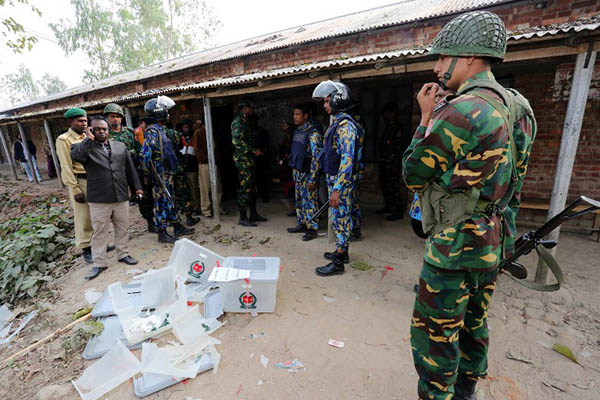 Bloody elections in Bangladesh have left 18 dead and prompted calls to declare polls null and void.

Bangladesh stared into the political abyss on Monday after the ruling Awami League swept to victory in a blood-soaked election that was dismissed as a farce by the opposition.

The outcome of Sunday’s polls was never in doubt after the opposition boycotted the contest, with 153 Awami League candidates or allies elected unopposed to the 300-seat Parliament even before polling day. With results in from all but eight of the 147 contested seats, the party had been confirmed as the winner in 105 while allied parties or nominal independents mopped up the other 34. A final result was expected later Monday.

But the deaths of at least 18 people in election-day violence, which saw hundreds of polling stations attacked by opposition supporters, underlined the polarization in a country that only won its independence in 1971. The election was also marred by poor turnout, which hit a record low in the capital Dhaka.

The Daily Star called it the bloodiest election in Bangladeshi history and said the Awami League had won “a hollow victory which gives it neither a mandate nor an ethical standing to govern effectively.”

The Bangladesh Nationalist Party, which led a boycott of 21 opposition parties, reacted by extending a general strike until Wednesday as it pressed the government to declare the election null and void. “The country has rejected these farcical elections which were meaningless, laughable and universally unacceptable,” said deputy leader Fakhrul Islam Alamgir.

Prime Minister Sheikh Hasina went ahead with the polls after refusing to bow to opposition demands to stand aside and allow them to be organized by a neutral caretaker administration, as in previous contests. But the New Age daily said the consequences would be disastrous if the ruling party’s “intransigence” continued. “Besides further escalation of the political crisis and social disorder within, the country could be exposed to the wrath of the international community and agencies, and even face isolation—economic, diplomatic and otherwise.”

Although Hasina’s aides say the government is keen to open dialogue with the BNP, the opposition leader Khaleda Zia has been under de facto house arrest for more than a week after mobilizing supporters in a bid to derail the election. Two-time former premier Zia is a bitter enemy of Hasina and there is little expectation that the two women can put aside their differences.

Hasina, who first came to power in 1996 and then thrashed Zia in a 2008 comeback, has accused her rival of orchestrating the violence, which reached a crescendo on Sunday. Police put the overall death toll on polling day at 18 while the BNP said 22 of its followers were killed.

Two of those killed were beaten to death while guarding polling stations in northern districts but most of the victims were opposition supporters. Police said they had opened fire as thousands of protestors torched polling stations and stole and burnt ballot papers to try to sabotage the poll. Voting either did not take place or was suspended in at least 436 of the 18,000 polling stations due to violence or the threat of violence, the election commission said. Tens of thousands of troops were deployed across the country after around 150 people had been killed in the build-up.

There was no immediate figure for the national turnout but the election commission’s top official in Dhaka said turnout in the capital was 22.8 percent. If that figure were replicated nationwide, it would be the lowest turnout in Bangladesh’s history.