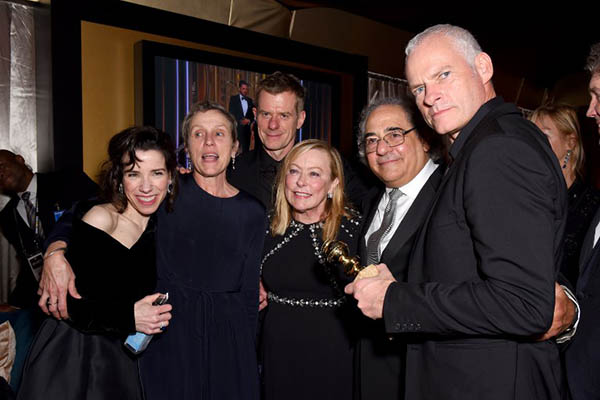 Hollywood spoke with one voice at the Golden Globes on Sunday to declare war on the film industry’s culture of sexual harassment and abuse, as it kicked off its annual awards season on a rare serious note.

Crime drama Three Billboards Outside Ebbing Missouri was the big winner of the night with four trophies, giving it momentum ahead of the all-important Oscars in March. But the awards podium played second fiddle at times to the clarion call coming from numerous stars about the need to heal and move forward.

“Speaking your truth is the most powerful tool we all have,” actress and media powerhouse Oprah Winfrey told the audience at the Beverly Hilton as she accepted a lifetime achievement award. “For too long, women have not been heard or believed if they dare speak the truth to the power of those men. But their time is up. Their time is up!” she added, earning a standing ovation.

The industry’s elite turned the red carpet black for the Globes, eschewing bright colors in a fashionable repudiation of disgraced mogul Harvey Weinstein and others ensnared in allegations of misconduct. And fittingly, it was a big night for movies and TV shows telling women’s stories, such as Three Billboards and coming-of-age tale Lady Bird on the film side, and TV juggernauts The Handmaid’s Tale and Big Little Lies.

The overall message at the Hollywood Foreign Press Association’s champagne-drenched annual prize-giving was a call for continued change. “People are aware now of a power imbalance. It’s led to abuse in our industry… It’s everywhere,” Meryl Streep, who was nominated for her work in media drama The Post, said on the red carpet.

Seth Meyers, making his debut as Globes host, opened the show with joke after joke about Hollywood’s post-Weinstein reckoning. “It’s 2018, marijuana is finally allowed and sexual harassment finally isn’t. It’s going to be a good year,” the late night NBC funnyman said. “For the male nominees in the room tonight, this is the first time in three months it won’t be terrifying to hear your name read out loud.”

Leading the pack by the end of the night was Three Billboards, Martin McDonagh’s searing film about a mother who battles local authorities to solve her daughter’s murder. It picked up trophies for best drama, screenplay, actress for Frances McDormand and supporting actor for Sam Rockwell.

“The women are not here for the food, they’re here for the work,” McDormand said to applause, noting the “tectonic shift in our industry’s power structure.” But McDonagh lost out in the directing category to Mexican filmmaker Guillermo del Toro, whose fantasy romance The Shape of Water came in as joint runner-up alongside Lady Bird with two awards each.

There were no nominations at all for female directors, prompting withering remarks from presenters Natalie Portman, Jessica Chastain and Barbra Streisand. “Did I hear it right—I was the only woman to get the best director award. And, you know, that was 1984? That was 34 years ago? Folks, time’s up,” Streisand said of her victory for Yentl, name-checking a new anti-harassment initiative.

While many fields were wide open, James Franco (The Disaster Artist) was always a shoo-in to win best actor in a musical/comedy movie. Franco—who also directed the film, which tells the unlikely story of Tommy Wiseau’s 2003 flop-turned-cult-hit The Room—gave a shout-out to his brother and co-star Dave, telling the gathered celebrities: “I love him more than anything. Thanks to my mother for giving him to me.”

Saoirse Ronan (Lady Bird) pipped Margot Robbie (I, Tonya) in the much closer best actress race, and Ronan was back on stage again alongside her director Greta Gerwig when the coming-of-age fable won best comedy movie.

Gary Oldman, who has earned wide acclaim for virtually disappearing into the role of British wartime prime minister Winston Churchill in Darkest Hour, took home the Globe for best actor in a drama.

On the small screen, HBO’s Big Little Lies scooped up a rare trio of acting awards for Nicole Kidman, Alexander Skarsgard and Laura Dern, and another trophy for best limited TV series. “This show is so much about the life we present to the world that could be very different than the life we live behind closed doors,” said Reese Witherspoon, who produces and stars in the series, which tackles domestic abuse. “So I want to thank everyone who broke their silence this year and spoke up about abuse and harassment.”

Kidman, who portrays an abused wife in the show, said she hoped the show and others could “elicit change,” while Dern urged Hollywood to support survivors of abuse. The Handmaid’s Tale followed up its Emmys night glory by beating perennial awards juggernaut Game of Thrones to the Globe for best TV drama series and best actress for Elisabeth Moss.

Below is the complete list of winners for the 75th Golden Globe Awards:

Best original song: Benj Pasek and Justin Paul, “This Is Me” from The Greatest Showman

Best drama actor: Sterling K. Brown, This is Us

Best musical or comedy actor: Aziz Ansari, Master of None