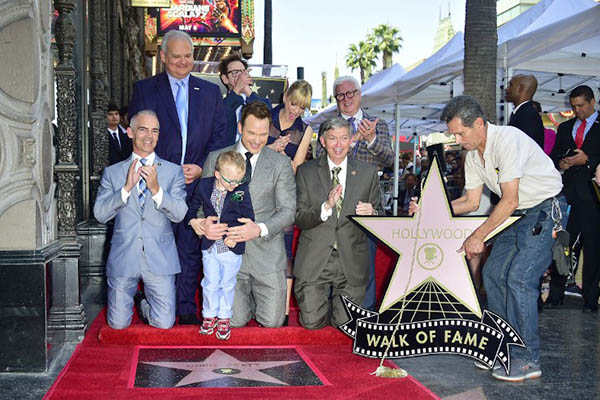 Actor awarded star on Walk of Fame for contribution to cinema

Action star Chris Pratt swapped his superhero gear for a formal suit on Friday as he was awarded a star on Hollywood’s Walk of Fame for his contribution to cinema.

Pratt, 37, found fame as loveable slacker Andy Dwyer on NBC comedy Parks and Recreation but has since become one of Hollywood’s most sought-after leading men thanks to roles in Jurassic World and Marvel’s Guardians of the Galaxy.

“I’m a man of faith and I believe that God works in mysterious ways, and gives us signs and gifts in life. And those gifts oftentimes come in the form of people,” he said, paying tribute to his mother. “Oftentimes we weren’t cash-rich but we were never love-poor,” he told a crowd on Hollywood Boulevard that included Guardians co-stars Zoe Saldana, Dave Bautista and Michael Rooker.

The actor thanked filmmaker James Gunn for casting him as Star-Lord in Guardians—a role he said had changed “so many lives,” from children in hospital to his real estate agent—and acknowledged Marvel for “taking a chance on the chubby guy from Parks and Rec.” He also paid a lengthy tribute to his wife, the actress Anna Faris, telling her: “Without you, none of this would mean anything.”

Pratt, once a moderately successful TV actor, went to great lengths to build an action hero’s physique and was rewarded with his first major lead part in 2014’s Guardians, which went on to gross more than $770 million worldwide. The sequel, due out on May 5, is expected to do even bigger business.

Pratt also starred in 2015 monster movie reboot Jurassic World, the fourth-highest grossing film of all time, and is due to reprise the role of dinosaur trainer Owen Grady in the sequel, due out in 2018. “Five years ago, I said to reporters Chris Pratt is the biggest movie star in the world—it’s just that people don’t know it yet. Well now, here today, people know it,” said Gunn, 46.

Faris, with whom Pratt has a four-year-old boy, showed the crowd a unicorn Pratt had drawn her before giving an unconventional speech thanking the many friends and family who had helped shape her husband. “I know that if our circumstances were different, and we weren’t as fortunate to be standing here and leading our Hollywood life, we would be happy in the woods together,” she said.

Raised in Lake Stevens, Washington, Pratt studied acting at a local community college for half a semester before moving to Hawaii and living in a van. He got a job at a Bubba Gump Shrimp Co. restaurant where he was discovered by Canadian-American actress Rae Dawn Chong, who gave him a role in her directorial debut, the short horror film Cursed Part III, which was never released. His other film credits include The Magnificent Seven, Passengers, Moneyball and Zero Dark Thirty.