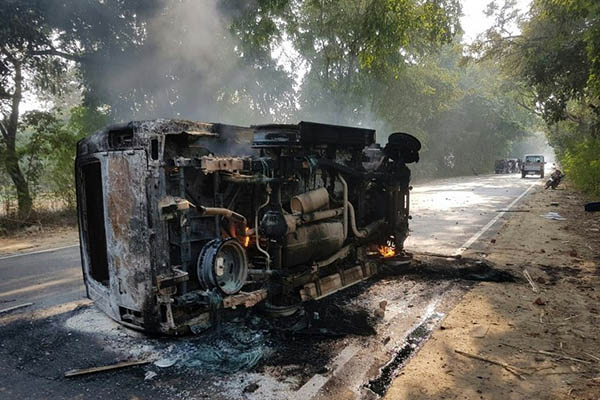 A violent mob rampaged through villages in northern India on Monday after the discovery of suspected cow carcasses, setting vehicles ablaze and murdering two people including a senior police officer.

Police fired shots in the air as hundreds of villagers, incensed over the death of the sacred animals, pelted stones at officers sent to quell the violence just 130 kilometers from New Delhi.

Anand Kumar, an additional director general of Uttar Pradesh state police, said word spread quickly in Bulandshahr district when carcasses believed to be cows were found dumped near a village.

Cows are considered sacred by many Hindus and some accused of slaughtering the beasts have been lynched by vigilante mobs in the past.

“These were suspected cow carcasses and the villagers were angry about it,” Kumar told reporters. “There were around 400 people from three neighboring villages. They indulged in heavy stone pelting and arson. Police baton-charged and tried to bring the situation under control. Police resorted to firing in the air to control the crowd.”

Subodh Kumar Singh, a police inspector, and a local villager were killed in the violence. It is not yet clear how they died. Police have launched an investigation and said post-mortem examinations would be conducted.

It is illegal to slaughter cows or even possess beef in many Indian states. Some carry life sentences for transgressions. Uttar Pradesh, the scene of Monday’s violence, prohibits cow slaughter. Its chief minister Yogi Adityanath, a firebrand Hindu priest turned politician, has pushed for slaughterhouses to be closed and cow shelters to be constructed.

Cow slaughter is a powder-keg issue in India and one that rights group say has been stoked by Hindu hardliners to provoke violence against Muslims and other minorities. In two prominent cases last year, a dairy farmer was murdered on a highway for transporting cows and a Muslim teenager accused of carrying beef was stabbed to death on a crowded train.

Critics say vigilantes have been emboldened by the 2014 election of Prime Minister Narendra Modi’s Hindu nationalist Bharatiya Janata Party. Modi, who will seek a second term in office in elections by May, last year condemned murder in the name of protecting cows after a string of vigilante killings sparked protests.