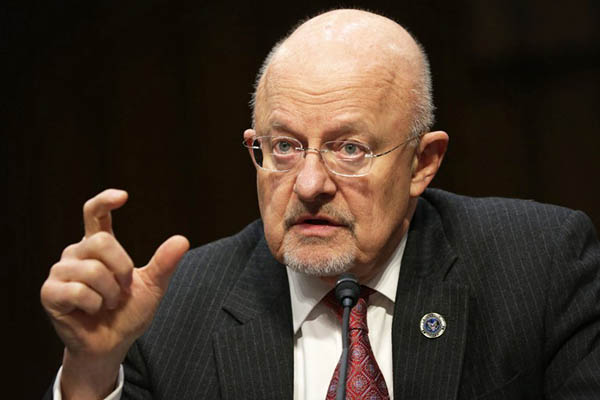 In a report and briefing to a U.S. Senate panel, Director of National Intelligence James Clapper also said the Islamic State was hiding fighters among Syrian refugees heading to Europe. Clapper said “homegrown violent extremists”—“the most significant Sunni terrorist threat”—may be inspired by the attacks last year on military bases in Chattanooga, Tennessee and a workplace gathering in San Bernardino, California.

They are also influenced by the I.S. group’s “highly sophisticated media” and by “individuals in the United States or abroad who receive direct guidance and specific direction from ISIL members or leaders.”

Separately, responding to questions from lawmakers, Clapper warned that the group had planted fighters among the thousands of Syrian civilians fleeing to neighboring countries and to Europe. “One technique they’ve used is taking advantage of the torrent of migrants to insert operatives into that flow,” he said. “They also have available to them—and are pretty skilled at—phony passports so they can travel ostensibly as legitimate travelers as well.”

A U.S.-led military coalition is helping local forces in Iraq and Syria close in on cities in the I.S. group’s so-called “caliphate,” targeting its leadership and oil facilities with airstrikes. But, Clapper warned, the threat posed by the movement is only rising as it expands its reach into Libya and builds a global network of terror cells, supporters and allied armed groups.

“The Islamic State of Iraq and the Levant has become the preeminent terrorist threat because of its self-described caliphate in Syria and Iraq, its branches and emerging branches in other countries, and its increasing ability to direct and inspire attacks against a wide range of targets around the world,” he said.

Clapper made the warning in the annual “World Wide Threat Assessment of the Intelligence Community,” which he submitted to the Senate Armed Services Committee ahead of his appearance before it.