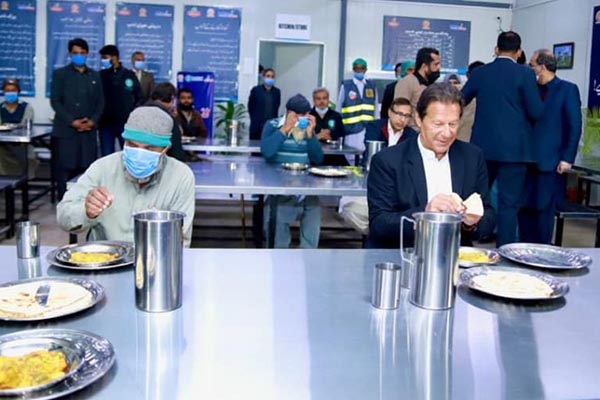 Prime Minister attends the inauguration of a shelter home in Islamabad. Courtesy PID

Once forced to sleep on pavements and in public parks, Pakistan’s homeless can now avail shelter in the panagahs (shelter homes) launched by the incumbent government and receive help in alleviating poverty effectively, Prime Minister’s Focal Person on Shelter Homes Naseemur Rehman said on Tuesday.

In an interview with state-run Associated Press of Pakistan, he said that all credit for the panagah initiative went to Prime Minister Imran Khan, who had dedicated himself to improving the living standards of the downtrodden segments of society. He said presently there were 93 dedicated panagahs across Pakistan, as well as a large number of langar khanas (food centers), which were providing the impoverished with two free meals every day, as well as a place to stay the night in safety.

According to Rehman, Rs. 300 is spent on feeding and housing people who avail the panagahs, adding that migrant laborers could save up to Rs. 6,000/month that they could then utilize on their families’ welfare.

Noting that Pakistan is one of the most charitable countries in the world, giving freely in the form of zakat, charity and in-kind donations, he said this spirit was among the driving forces behind the panagahs. “This is the first time in the history of Pakistan that a program is trying to tap into the people’s goodwill, as well as the existing resources, and removing wastage and duplication caused by overlapping aid,” he said, adding that the panagahs provided charity in an organized and strategic manner that made the process more dignified and maintained the self-respect of the recipient.

As an example, the focal person told APP, the panagah management in the federal capital had launched a free shuttle service to facilitate daily wage earners in reaching shelters located in far-flung areas. This would help us achieve optimum use of resources, he said, adding that prior to this many people opted to sleep under the open sky rather than bear travel expenses for the shelter homes.

Overall, said Rehman, the panahgahs had served around 150,000 poor people thus far, providing them food and a clean and safe place to spend the night. Referring to just Rawalpindi and Islamabad, he said 600 people were being helped daily. This, he stressed, was a manifestation of Prime Minister Imran Khan’s vision of transforming the country into Riyasat-e-Madina, where all citizens irrespective of their caste, religion, race and social status are treated equally.

He said the initiative had received tremendous response from across the world, adding that donors were providing in-kind donations to the shelter homes program, helping its sustainability. Launched under the umbrella of the Ehsaas initiative, the incumbent government’s panagah has benefited 373,200 beneficiaries according to government data. All beneficiaries are required to sign an undertaking ensuring they do not misuse the facilities.