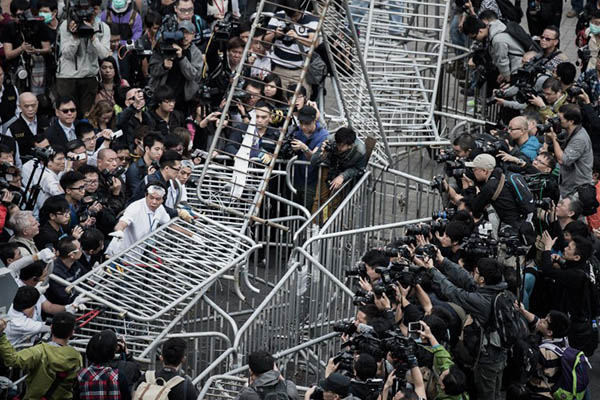 Protesters allow clearance of court-ordered area near office tower, but refuse to budge from surrounding area.

There was no resistance from demonstrators as workers dismantled metal barricades blocking access to a skyscraper opposite government headquarters, on the edge of the sprawling camp in the central Admiralty district. Dozens of police and bailiffs stood guard as staff removed the barriers from outside the 33-floor CITIC Tower office block, enforcing a court injunction won by the building’s owners. But an argument broke out as the workers removed several more fences from a nearby roundabout, with protesters shouting that the area did not fall under the injunction. “This is unacceptable to the protesters,” pro-democracy lawmaker Albert Ho shouted at the bailiffs through a loudspeaker.

Demonstrators have been camped on three major Hong Kong thoroughfares since Sept. 28, demanding that Beijing grants free leadership elections to the semi-autonomous Chinese city. Beijing has said it will allow a public vote to elect Hong Kong’s next leader in 2017—but it insists the candidates must be vetted by a loyalist panel, which the protesters say will ensure the election of a pro-Beijing stooge.

The court order covers only the immediate area around the government skyscraper in Admiralty, but not a long section of a multi-lane highway still under occupation and filled with hundreds of tents. Protesters said they had no intention of budging from the rest of the camp. “I will not stop them [removing these barricades]. The movement doesn’t necessarily need to take place here,” said 25-year-old Max Cheng as he stood watching with a gaggle of other protesters. He added: “If the government doesn’t respond to the people’s demands, it will ultimately have to face the consequences.”

Tuesday’s operation stems from the first of three injunctions sought by private companies and associations in a bid to shrink the protest areas. Bus companies and taxi drivers’ groups are pursuing two similar court orders to clear other blocked roads in the city, saying business has taken a heavy hit from weeks of traffic disruption.

A second injunction seeks the clearance of roads in the Mongkok district of Kowloon, home to the second-largest protest camp, while court proceedings are continuing over other parts of the main camp at Admiralty. The third protest site is in the busy shopping district of Causeway Bay. Protesters had already mostly cleared the area outside CITIC Tower in anticipation of Tuesday’s swoop by authorities.

In a statement late Monday, police had pledged “resolute action” against anyone obstructing the bailiffs clearing the area around the skyscraper, saying they could face charges of criminal contempt of court.

The protests drew tens of thousands people at times initially, but the crowds have shrunk dramatically as the movement struggles to keep up momentum. Surveys suggest that public opinion is starting to turn against the campaign.

A poll by Hong Kong’s Chinese University conducted on Nov. 5-11 found more people opposed the Occupy movement than supported it—the first time this has been the case since the university started the poll in September. About 67 percent of all respondents said protesters should go home, the survey said.

Hong Kong’s leader Leung Chun-ying said it was “abundantly clear by now that the occupiers are and have been breaching the law of Hong Kong.”

“Hong Kong is a law-abiding society and the rest of Hong Kong expect the occupiers, like everyone else in Hong Kong, to follow the law,” he said in a statement.