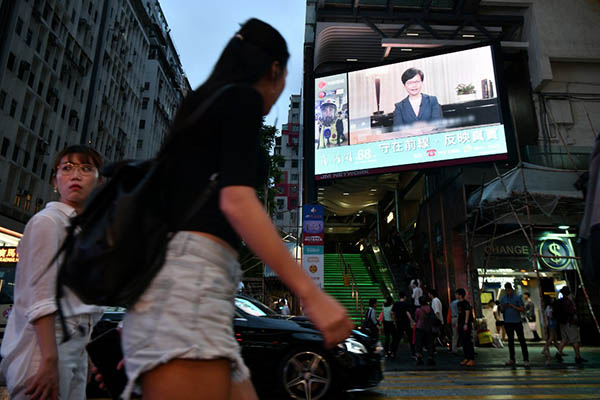 Despite securing key demand, demonstrators vow they will not end their protests

Hong Kong’s leader on Wednesday bowed to a key demand of pro-democracy protesters following three months of unrest, announcing the withdrawal of a loathed extradition bill, but activists vowed to press on with their campaign.

Millions of people have taken to Hong Kong’s streets since June in the biggest challenge to China’s rule of semi-autonomous Hong Kong since its handover from the British in 1997. After refusing for months to permanently withdraw the bill, which aimed to allow extradition of criminal suspects to mainland China, chief executive Carrie Lam finally conceded as she called for calm and an end to violent protests.

“The government will formally withdraw the bill in order to fully allay public concerns,” she said.

Initial reports in the local media flagging Lam’s announcement raised hopes that giving in to the extradition demand could help end the crisis. Hong Kong’s stock market climbed nearly four percent in afternoon trade after the reports emerged. But those hopes were quickly tempered, with pro-democracy activists voicing anger and determination to press on with their broader democracy campaign.

“Too little, too late,” said Joshua Wong, a prominent activist who was arrested late last week as part of a police swoop on leading pro-democracy figures. “We urge the world too to [be] alert [to] this tactic and not to be deceived by HK and Beijing Govt. They have conceded nothing in fact, and a full-scale clampdown is on the way.”

The protests were sparked by opposition to Lam’s extradition legislation, which was seen as another erosion of the liberties enjoyed in Hong Kong compared with authoritarian mainland China. After millions of people took to the streets, Lam suspended the Beijing-backed bill and called it “dead” but refused to formally withdraw it, sparking fears it might be resurrected. As clashes intensified the movement evolved into a broader campaign to include demands for an independent inquiry into alleged police brutality, an amnesty for those arrested and a retraction of classifying protesters as rioters.

Another demand was for Hong Kongers to be able to directly elect their leaders—a major red line for Beijing.

Wednesday’s video message from Lam was markedly more conciliatory in tone than her more recent statements. “Let’s replace conflicts with conversations and let’s look for solutions,” she said, announcing plans to appoint experts to advise “to independently examine and review society’s deep-seated problems.” But she also repeated her reasons for dismissing the four other core demands, rejecting calls for an independent inquiry and saying neither an amnesty, retraction of the riot term or immediate universal suffrage was feasible.

Online message forums used by the largely leaderless democracy movement were filled with angry comments saying the bill’s withdrawal would not end the protests. “Five major demands, not one less. Liberate HK, revolution now,” one widely shared message on the Telegram messaging app read. “They’ve tried to shut the stable door but it’s come too late,” political analyst Dixon Sing told AFP, adding only an independent inquiry would start to mollify the “extremely high level of anger and injustice” among protesters and the wider public.

Felix Chung, a pro-Beijing lawmaker, said many in his camp favored an inquiry, adding Lam’s withdrawal concession was “a bit too late, but better than never.”

For much of the past three months Lam has struck a defiant tone, appearing either unwilling or unable to make any concessions. Then an audio recording emerged this week of Lam telling business leaders her options were “limited” by Beijing, which viewed the protests as a national security and sovereignty issue.

In the audio recording, Lam said she wanted to quit and take responsibility for triggering the unrest with the extradition plans, but that she was hamstrung by Beijing. “For a chief executive to have caused this huge havoc to Hong Kong is unforgivable,” an emotional Lam said in the audio recording, which was obtained by the Reuters news agency. “If I have a choice,” she said, speaking in English, “the first thing is to quit, having made a deep apology.”

But after the recording was released, Lam held a press conference on Tuesday to insist she had never contemplated resigning. While Wednesday’s video message appealed for calm, it also reminded protesters that challenging Beijing’s authority was placing Hong Kong in a “vulnerable and dangerous” position. “Our foremost priority now is to end violence, to safeguard the rule of law and to restore order and safety in society,” she warned.