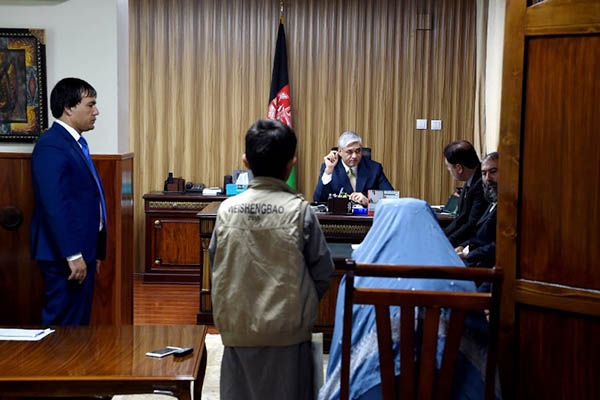 Abdul Qader shuffles into the office of Afghanistan’s attorney general a broken man—his son was slaughtered “like a sheep” and no one has been brought to justice. The 75-year-old is one of many ordinary Afghans who feel let down by the country’s judicial system—where convictions are hard to secure due to endemic corruption, inefficiency and a lack of resources.

For some their only hope is to travel to Kabul to seek redress.

Since taking office in April 2016, Attorney General Farid Hamidi has been throwing open his doors to the public every Monday in an effort to build confidence in the law and root out venal officials.

Hamidi, a former member of the country’s human rights commission, begins receiving the first of dozens of petitioners in his office at 8:00 a.m. He stays until he has seen the last person, taking a half hour break to eat and pray. The meetings sometimes finish as late as 8:00 p.m.

The cases are a collection of misery and together illustrate the poverty and injustices endured by many Afghans, on top of the violence that has become part of the fabric of the war-torn country.

“My son was decapitated in Herat,” Qader, who is blind and almost crippled, tells Hamidi, explaining that his 43-year-old son was a street vendor in a Taliban-controlled area of the province bordering Iran. “His head was chopped off like a sheep’s” 18 months ago while he slept in a hotel room, he said.

Three people were charged with his murder but they were later acquitted by a court. The gruesome case remains unsolved. “No justice was delivered,” Qader tells Hamidi, another son sitting beside him for support. “If you deliver me justice I will pray for you.”

Graft permeates nearly every public institution in Afghanistan, but the judicial system is ranked by Afghans as the most corrupt, Transparency International said last year—compounding the incompetence and laziness that also hamper the delivery of justice.

Judges, prosecutors and police are frequently bribed and influenced by powerful or wealthy interests seeking to stop investigations or ensure favorable outcomes. That has deprived many ordinary Afghans of a fair hearing and inadvertently strengthened support for the Taliban in some areas where they are seen as stronger and more efficient than the government on law and order.

A woman whose seven-year-old daughter was kidnapped more than two years ago in the northern province of Kunduz and married to an older man begs Hamidi to help retrieve her little girl. “I can’t take my daughter back and I don’t have anyone to help me,” says the woman, wearing a black hijab as she holds out a photo of her child with her henna-stained hands. “I can’t go there [to her son-in-law’s home], he will kill me,” she says before she is ushered out of the room sobbing.

Another woman wearing a blue burqa comes into the office accompanied by a small boy, who is the son of her husband’s first wife. With her faced hidden by the shapeless covering, she tells Hamidi that she and her husband were wrongly convicted of murdering the boy’s mother.

She served time in jail, but her husband is still behind bars. “They have brought misery to my life,” she says, desperation in her voice. “They jailed me because they accused me of being the murderer but I wasn’t. If a Pashtun woman is jailed what remains of her dignity?” she says referring to the largest ethnic group in Afghanistan.

Around 30,000 petitions, including those filed by the 6,000 people who have met face-to-face with Hamidi, have been processed by his office. Issues range from property disputes and divorces to kidnappings and murder. The cases are assessed in Kabul and then returned to the local authorities who are required to report back with more information. The attorney general and his advisers then decide what action, if any, to take.

It is not clear how many cases have been resolved through this process, but Hamidi said around 2,000 people wrongly detained have been freed as a result of their work. He admits that tackling corruption is “time consuming,” but he remains undeterred. “No country can overcome corruption overnight,” he says. But “when an ordinary person can come to this office and meet the attorney general of the country I think this helps win their trust in the justice system.”

While Hamidi’s efforts have drawn praise, his petitioners’ meetings have been described by some as old-fashioned and lacking transparency. “We don’t know if this has really helped anyone apart from the attorney general himself making an image for himself,” said Sayed Ikram Afzali, executive director of Kabul-based advocacy group Integrity Watch. “We are dealing with a population of 30 million people, we need a better system than this.”