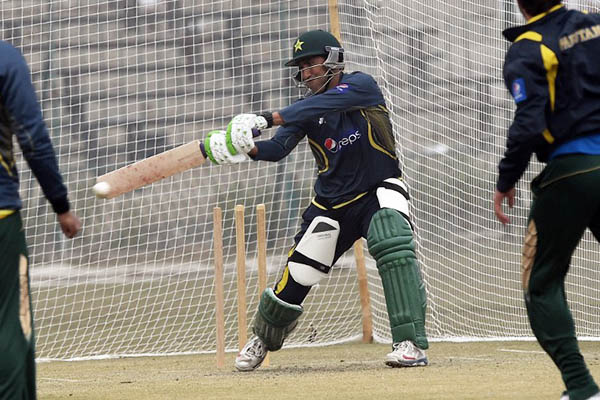 If there is one team among the top eight at the World Cup which could either crash out embarrassingly in the first round or romp to the title, it’s Pakistan.

The talented yet unpredictable side is haunted by injuries to its fast bowlers, the suspension of match-winning spinner Saeed Ajmal and a tussle for the captaincy between Misbah-ul-Haq and Shahid Afridi. All seems to have settled down as Haq’s men embark on a mission to match Imran Khan’s World Cup triumph—Pakistan’s only win—in Australia some 23 years ago.

“This team has the spirit of cornered tigers,” said chief selector and former captain Moin Khan, a key member of 1992 winning team. “If they play to their potential this team can surprise the world.”

Captain Misbah-ul-Haq, who has recovered from a hamstring injury, is also confident of the best results. “The format of this World Cup is such that teams have a lot of opportunities,” said Haq, who will retire from one-day cricket after the World Cup. “It would be the icing on the cake if I end my one-day career with the trophy.”

“It will be important that Hafeez clears the test because he is two-in-one and his bowling gives us the right combination,” said the captain.

Lanky paceman Mohammad Irfan, the tallest man to ever play international cricket at 7’1”, is expected to be the x-factor in an otherwise inexperienced pace attack, which will miss Umar Gul, who is not fit enough for the event after knee and ankle problems.

“To me the x-factor in our team is Irfan. With his height I think he can be dangerous,” said coach Waqar Younis, who missed Pakistan’s World Cup win in 1992 with a back problem.

In Ajmal’s absence, leg-spinner Yasir Shah, along with all-rounder Afridi, will handle the spin department. Afridi, who will also quit one-day cricket after the World Cup, will be important too as a batsman in the slog overs as will be Umar Akmal, Misbah and Sohaib Maqsood.

Pakistan’s top-order problem persists and will continue to haunt them, as Hafeez opening the innings with Ahmed Shehzad doesn’t always guarantee a trouble-free start. They will hope the experienced Younis Khan and Haq provide stability to the batting, for which the main problem lies in playing too many dot balls.

Pakistan has the worst run-rate among the top 10 teams in playing dot balls from over 11 to 40.

Pakistan must win one of their first two matches—against India and the West Indies—in order to have easier passage into the last eight. If not, their qualification will rely on their last group B match against a dangerous Ireland team, the same opponents who ousted them in the first round of the 2007 World Cup in the Caribbean.