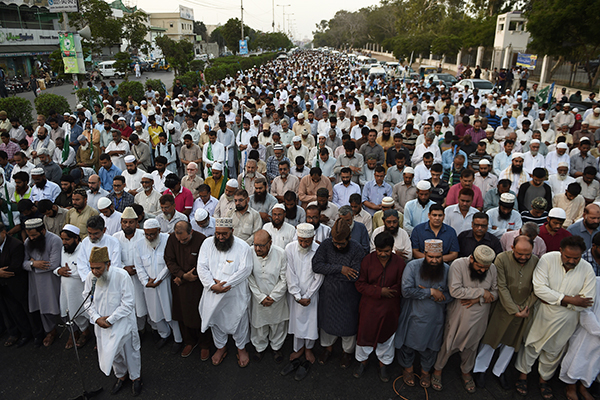 Should Pakistan move against Bangladesh?

Bangladesh hanged Jamaat-e-Islami leader Motiur Rahman Nizami on May 11, triggering riots in a divided two-party polity. Nizami was a minister in the opposition Bangladesh National Party of Khaleda Zia and was accused in a war tribunal of setting up the pro-Pakistan Al-Badr militia, which killed writers, doctors, journalists, and intellectuals during the 1971 war that separated Bangladesh from Pakistan. The tribunal, not internationally recognized as just, was established by the Awami League government of Hasina Wajed.

Pakistan has protested the hangings—Jamaat has lost four leaders so far—and Pakistan’s Jamaat-e-Islami has taken out angry processions accusing Islamabad of not “taking action” against the executions. Islamabad has accepted the argument that the Bangladeshi Jamaat is being hounded because it “defended Pakistan” and refused to support the freedom movement egged on by India in the shape of the Mukti Bahini (Freedom Army) from across the border.

Reacting to Jamaat processions in Pakistan, Interior Minister Chaudhry Nisar Ali Khan has, as he said, put the matter in the hands of Prime Minister Nawaz Sharif, which will probably lead to embarrassment rather than solution because Pakistan and Bangladesh don’t enjoy friendly contacts these days and have already expelled each other’s diplomats. As Pakistan’s president, Gen. Pervez Musharraf had “regretted” the 1971 excesses but not “apologized” as demanded by the Awami League; and the bad bilateral equation continues.

What “action” can Pakistan take? Both states are under attack from Islamist extremism, losing citizens to youths ready to kill for such organizations as the Islamic State. Bangladesh has already accused Pakistan of “interfering.” In the words of Shahriar Alam, state minister for foreign affairs in Dhaka: “We are disappointed with Pakistan’s reaction. We never welcome anyone interfering in our internal issues. Despite repeated reminders, they are still doing it. They keep saying they are saddened by the verdict. But those being tried are Bangladeshi citizens after all.”

As for Pakistan’s legal standing in the latest case, the victim had nothing to do with Pakistan, being a Bangladeshi citizen whose death had been confirmed by the Supreme Court of Bangladesh. Considering that Pakistan can hardly boast of having endeared itself to its other neighbors—India, Afghanistan, Iran—any move against Bangladesh will be counterproductive without pleasing its own Jamaat-e-Islami.

pakistan should first take care of itself which is in worse condition than Bangladesh before trying even think about others. pakistan comes under failed state category while Bangladesh comes under Developing Nations category

yes for sure Pakistan must go against Bangladesh. it’s necessary now.

Do you think you have any influence in Bangladesh! ? Pakistan haven’t officially apologized to Bangladesh yet neither obliged with compensation to the family of Bengals for the massacre they have done. You are going to lose beluchistan soon I hope. If you don’t change the hypocrisy as a nation you will get kicked from everywhere.

Bangladesh is also suffering from extremism.
just recently some secular writers and atheists got hacked of and ive got just one more thing to say
if bangladesh had a border with afghanistan they would have been run over by the taliban ages ago.
the only problem with pakistan is terrorism and if thats the basis on which you guys call pakistan a failed state egypt would be a failed state as well with isis shooting down planes over egyptian soil .India would also be a failed state as they have a higher rating on the global terrorism index than pakistan.