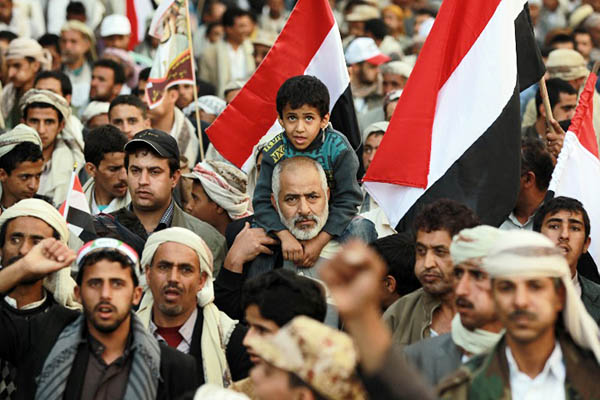 “No to Houthi, and no to the coup,” hundreds of protesters who had gathered near the presidential residence in Sanaa chanted, in reference to militia leader Abdel Malek al-Houthi. Similar protests were held elsewhere across the capital, despite a newly announced ban on unauthorized anti-Houthi demonstrations.

The militia, which is also known as Ansarullah, overran Sanaa in September and on Friday formed of a presidential council and a security committee in a move widely denounced as a coup.

In Sanaa’s Change Square, the epicenter of Arab Spring protests, thousands of Houthi supporters gathered for a rival protest to commemorate the fourth anniversary of the start of the uprising that forced out strongman Ali Abdullah Saleh. Pro-Houthi women covered in black from head to toe waved Yemeni flags at a separate demonstration at Sittin Street, near the residence of recently resigned President Abedrabbo Mansour Hadi. Armed militiamen deployed in force across the capital searching vehicles carrying supporters in an attempt to secure their own demonstrations.

Following their takeover in Sanaa, the Houthi militia seized more territory in the Sunni-majority country this week, sparking fears of a backlash from its feared Al Qaeda branch. Thousands held anti-Houthi protests in several other Yemeni cities, including Baida, Ibb, Hudeidah and the main southern city of Aden.

The Arab Spring protests of 2011 had raised hopes of democratic reform after more than three decades of iron-fisted rule by Saleh. But his departure from office the following year created a power vacuum that the Houthis and Al Qaeda have been vying to fill.

Western governments evacuated their diplomats from Yemen on Wednesday over security fears as the conflict deepened in the impoverished Saudi neighbor.