How Air Pollution Hurts the Youngest 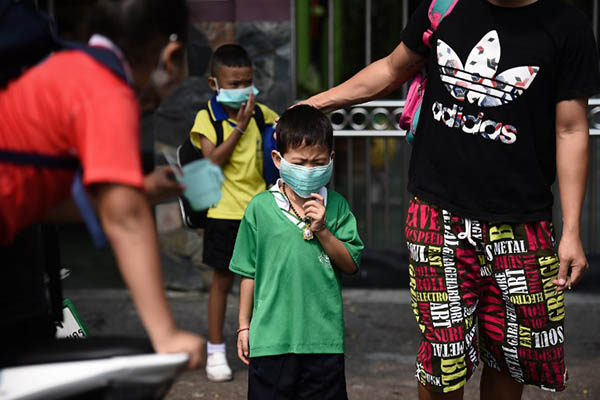 Air pollution can have devastating health effects for people of all ages, but children are more vulnerable and face specific risks that can last a lifetime, experts say.

Why are children more vulnerable?

Children breathe faster than adults and are smaller “so they end up getting a higher dose of air pollution into their lungs relative to their body mass than adults,” said Rima Habre, assistant professor of clinical preventative health at the University of Southern California (USC).

Children are also closer to the ground, where some types of pollutants tend to concentrate, and can be exposed to dirty air for longer stretches if they play outside. But air pollution isn’t only found outdoors. Some of the most serious air pollution is in homes where heating and cooking fires burn fuel incompletely, producing hazardous fumes.

These are disproportionately inhaled by young children and their mothers, who spend more time inside and often close to the home’s stove.

Children’s organs are also still growing and pollution can slow the development of the lungs, brain and other organs in ways that can have life-long effects. “Children have a long lifetime ahead of them during which even diseases with a long latency period have time to manifest,” said Carrie Breton, associate professor of preventive medicine at USC.

What are the effects on children?

The consequences of air pollution can be immediate but can also manifest over the longer term. The most obvious immediate effects are respiratory. Children exposed to air pollution are more susceptible to infections including pneumonia and bronchitis, as well as asthma.

Research into how exactly air pollution causes these problems is still ongoing, but the World Health Organization says dirty air contributed to respiratory tract infections that resulted in 543,000 deaths in children under five in 2016. And there are other less obvious effects including on “biological pathways,” Breton said.

“There is some evidence to suggest air pollution may shift metabolic or stress response pathways that could then put children at greater risk for diabetes later in life or cardiovascular diseases,” she added.

The WHO also says there is “substantial evidence” that traffic-related air pollution “is associated with increased risk of childhood leukemia.”

Other research has linked air pollution to childhood obesity, persistent ear infections and neurodevelopment issues that can lead to lower cognitive test outcomes and may influence behavioral disorders.

What about in the womb?

Children are exposed to the health dangers of air pollution even while they are still in the womb. “Gases and ultrafine particulates can penetrate deep into the lungs of the mothers and enter their bloodstream. These particles have been found in placenta,” said professor Neil Thomas of the University of Birmingham’s Institute of Applied Health Research.

There is also recent initial evidence to suggest pre-natal exposure to air pollution may alter newborn thyroid function. It is not yet clear whether these health problems will then be passed down the generations, but there is initial research suggesting that exposure to tobacco smoke during pregnancy could increase the risk of asthma in children and grandchildren. “This may provide a theoretical framework for considering a similar effect for air pollution in the future,” Breton said.

What can parents do?

The most effective action is to move away from polluted areas and while some health effects will last a lifetime, research shows that children who move to places with cleaner air see improved health, including better lung function and lung growth rates. But for the many families who can’t move away, experts say there are still ways to minimize harm.

“When outdoors levels are high, try to stay indoors and refrain from excessive physical activity, walk down secondary roads rather than the main roads that are often more polluted,” said Thomas.

Indoors, families should avoid biomass burners, incense sticks and open fires, he added. And in traffic, close off air intakes that can often suck in fumes from surrounding car exhausts.