Home Lightbox How and Why it Began 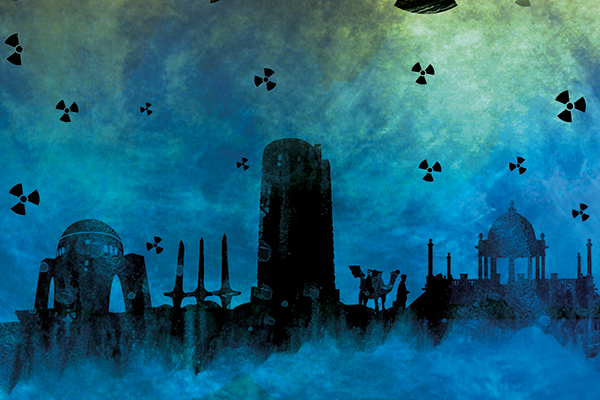 Twenty years ago on this day, May 30, Pakistan conducted its sixth and final hot-test at 1310 hours, the last one in the Kharan desert. Earlier, on May 28, Pakistan had conducted five tests and validated the parameters of devices of varying designs.

This last test was of “immense significance”, as former brigadier Feroz Hassan Khan, the first director-Arms Control and Disarmament Agency (ACDA) at the Strategic Plans Division (SPD) , says in his book, Eating Grass: The Making of the Pakistani Bomb (Stanford University Press; 2012): “This particular device, a design created by the Theoretical Group …. was the latest and best design… and the test validated the theoretical design parameters. A miniaturized device, it was very small and still powerful in yield. It is this very design that was meant for Pakistan’s ballistic missiles and aircraft.”

The sixth test done, Pakistan had taken out the bomb from the basement and put it on the shelf. India had already done it. The two hostile neighbors were now overt nuclear-weapons states.

But the story of the subcontinent’s weaponized nuclear capability begins much earlier than May 1998. Here’s a bird’s-eye view.

The undivided India had begun to prepare the ground for research in the nuclear field as early as 1944. Under the direct supervision of Dr. Homi Bhabha and through his personal initiative, Bhabha began training scientists and technicians at the Tata Institute of Fundamental Research in Science and Technology. It was a non-governmental initiative and was not tied in any way to the government then run by British colonists. It was this groundwork that enabled India, post-Partition, to set up its Atomic Energy Commission in 1948 with Dr. Bhabha in the chair.

India’s first prime minister, Pandit Jawaharlal Nehru, in a speech in parliament mentioned how India had missed out on the other ages, the watersheds of history and, if it wanted its rightful place in the world, it could not afford to miss out on the nuclear age. Bhabha, therefore, worked closely with Nehru and reported directly to him, bypassing the bureaucratic channels.

Pakistan was late to the idea. It wasn’t until 1954 that some interest in developing nuclear technology was generated when a touring exhibition, as part of United States president Eisenhower’ Atoms for Peace program, came to Pakistan. This led to the establishment of a 12-member Atomic Energy Committee in 1955. The Committee recommended setting up a three-pronged Atomic Energy Council. That Council came into being in March 1956. Its first prong, the governing body, comprised two federal ministers, two federal secretaries and the PAEC chairman. The second prong was a modest Atomic Energy Commission with a chairman and six scientists and the third prong was an advisory committee that included “scientists, doctors, industrialists, agriculturists, and educationists.”

Thus far no thought was given to weaponizing. The idea of research and development was purely linked to peaceful uses of nuclear energy. Nothing much happened, though. Plans were finalized for acquiring a 5MW research reactor from the United States, which was supposed to become operational in 1960. It was delayed by five years. There were many factors responsible for such delays, including the lack of interest by the leadership and active opposition by the finance minister and the planning commission.

The pace somewhat picked up with the inclusion of a young Zulfikar Ali Bhutto in the 1958 cabinet of President Ayub Khan. Bhutto, the minister for fuel, power and natural resources, was an early nuclear-energy enthusiast, not just in the peaceful dimension, but also the weapons capability. As Dr. Naeem Salik, a former brigadier who also retired as director ACDA at SPD puts it in his book, Learning to Live with the Bomb…, “Bhutto’s key role in Pakistan’s nuclear development is undisputed.” Salik goes on to write: “Bhutto took serious note of the inauguration of a plutonium reprocessing plant by Indian Prime Minister [Lal Bahadur] Shastri in April 1964. He urged President Ayub Khan to get a similar plant, which the French were willing to supply at the time, but his request to the president to sanction PKR 300 million was turned down as it was deemed beyond Pakistan’s economic capacity. Even the military showed no interest in the nuclear program at the time….”

Khan also credits Bhutto: “The person who spearheaded the idea of nuclear Pakistan was Zulfikar Ali Bhutto. In Pakistan’s early history there was no consensus about the desirability or utility of nuclear weapons. Only a few individuals, most notably Bhutto, believed that acquiring them was critical for Pakistan.”

But despite Bhutto’s enthusiasm, also reflected in a widely-quoted 1965 statement about developing an atom bomb even if we have to eat grass (Khan’s book title draws from and refers to that statement), not much happened during the ‘60s. As Salik writes, Ayub Khan was not “enamored by [sic] the idea, despite the fact that at the time nuclear technology was easily available, safeguards were lax, and there were no export controls.”

Fast forward to 1971. The war vivisected Pakistan and left everyone in a trauma. Bhutto had come to power. He seemed the only person to get West Pakistan, now the only Pakistan, out of its dire straits. One of his major policy acts, barely a month after assuming power, was to convene a conference of scientists. The meeting happened on Jan. 20, 1972 in Multan, a rather unlikely place for such a sensitive huddle. The younger scientists at the meeting fully supported Bhutto’s idea of pursuing the nuclear route and claimed, optimistically, that they would make Pakistan nuclear-weapons capable in five years if they were fully supported and funded.

That was not to be. The country lacked critical nuclear infrastructure to that end. Pakistan only had a 5MW reactor at PINSTECH and a 137MW nuclear power plant in Karachi. Both were under International Atomic Energy Agency safeguards. It had no facilities to process and enrich uranium and no plutonium reprocessing plant. No specialist teams “to design weapons or produce special explosive lenses.” Everything needed to be built, brick by brick, over a decade-and-half before the country could get, as it did, to developing a nuclear-weapons capability. It’s a long story about an arduous journey, in the teeth of sanctions and export control regimes and is described in detail by Khan in Eating Grass.

But the most important aspect of this journey and the resolve that underpinned it relates to what Khan describes as ‘nuclear themes’: “Three threads interweave through the fabrics of many nuclear weapons acquisition stories: national humiliation [France, after Suez; China following Japanese colonization and U.S. threats; USSR, losing millions in WWII to German forces and later facing U.S. nuclear hegemony, Israel, to ensure ‘never again’ etc], international isolation, and national identity. When Pakistanis look back on their history, these themes are recurrent and provide a conceptual foundation from which specific strategic beliefs emerge.”

Post-1971, as Pakistan embarked on a genuine quest for nuclear-weapons capability, following the 1972 Multan huddle, it faced the real prospect of a nuclear South Asia and India’s nuclear hegemony when New Delhi conducted its first test in 1974, codenamed Smiling Buddha. In an elaborate exercise in dissembling, New Delhi described the test as a peaceful nuclear explosion (PNE). We now know that it wasn’t a PNE. “Raja Ramanna, who led the team of scientists which conducted the underground test, acknowledged in 1996 that it was indeed a weapons test.” [Amitabh Mattoo, India’s Nuclear Policy in an Anarchic World, quoted in Salik, Learning to Live with the Bomb.]

From thereon, for Pakistan there was no choice but to pursue the nuclear weapons option. This was also in conformity with Pakistan’s consistent stand during the negotiations for the NPT that it cannot, and will not, sign the treaty, given national security reasons, unless India put its signature on the treaty. India, for its part, argued that the treaty was discriminatory and short of complete disarmament, it will not sign the treaty.

India, Pakistan, Israel and Cuba remained the outliers. [Cuba signed the NPT and its Additional Protocol, as also the Comprehensive Test Ban Treaty in late 2002. That leaves only India, Pakistan and Israel as the original outliers. North Korea opted out of NPT in 2003, invoking the Withdrawal clause in the treaty and has since conducted multiple nuclear tests.]

A unique aspect of the story of Pakistan’s nuclear weapons acquisition is consistency. In a country where successor governments find it imperative, generally, to rollback the predecessor’s policies, after the 1972 convention in Multan and then the ’74 test by India, every government, civilian or military, has continued with the program, taking it forward. Most insiders acknowledge that this has been the single biggest reason for keeping the program on track and taking it to its logical end with the tests 20 years ago despite immense difficulties, including incessant pressure from the United States, its allies and the nonproliferation regime. Such was the pressure that France, which had agreed in 1976 to a tripartite agreement (France, Pakistan and the IAEA) to provide Pakistan with a reprocessing plant, reneged on the deal under U.S. pressure even though Pakistan had already paid USD100 million to Paris. It was only in Jan 1992 that France agreed to pay Pakistan USD118 million, 14 years after it had succumbed to pressure from Washington.

Today, Pakistan is a certified nuclear-weapon state, though outside the ambit of the NPT. It has, however, not been able to exploit this status. Policies from the past have served to add to other vulnerabilities even as nuclearization sought to address the overarching concern about India attacking and defeating Pakistan. To that extent, nuclear weapons have done their job. What more needs to be done, however, is beyond the remit and effectiveness of nuclear weapons. In fact, the fragility of the state serves to pose a threat to the very arsenal that is supposed to keep the state secure.

A score down the line, the policymakers need to look at the nuclear capability as one element of national power. It can guarantee security at a certain level but it also needs to be backed up by other elements of national power.

Pakistan supports peace and recognizes that war is not an option despite challenges on its borders. The history of Pakistan’s nuclear weapons programme is a story of national resilience and tremendous sacrifices. Pakistan’s nuclear program is solely for deterrence against India, and to stabilize the subcontinent. So, rather than using politicized sentiments to downplay Pakistan’s nuclear capability, the international community must mainstream Pakistan as a responsible nuclear state.