How Safe Is America, Really? 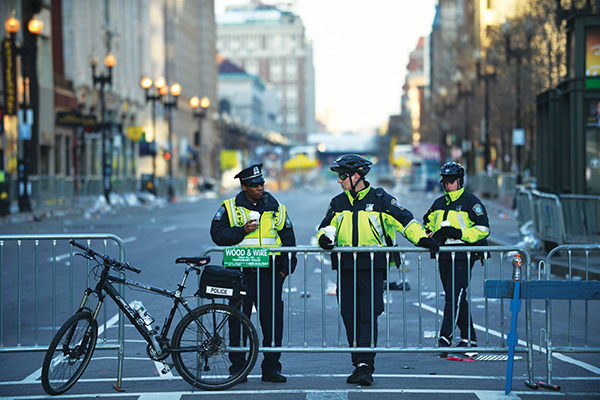 After the Boston Marathon bombing, a nation seeks answers.

[dropcap]T[/dropcap]he Boston Marathon bombing on April 15 was not another 9/11. Not even close. The order of magnitude speaks for itself: three dead in Boston, nearly 3,000 in New York City. Still, in the aftermath of the Boston tragedy, it is impossible not to ask the same questions that came on the heels of September 11: just how safe are we in our homes, in our workplaces, on our streets, and at our celebrations? And just how safe can we be?

The bombs used in Boston were improvised explosive devices, IEDs, made from everyday pressure cookers filled with easily fabricated explosives as well as nails and ball bearings to act as shrapnel. That could point to inspiration from Al Qaeda—jihadist guerrillas in Afghanistan, Pakistan, Iraq, and India commonly use such IEDs—but not necessarily. The last man to attack strangers with an IED in the United States was Eric Rudolph, who planted a bomb at the 1996 Olympics in Atlanta.

One thing seems clear: the primary danger facing the United States today is no longer a 9/11-type attack resulting in thousands of casualties but rather smaller-scale violence, whether foreign or domestic in origin. “Are we safer than after 9/11? Absolutely! Are we absolutely safe? No,” says a veteran official whose career in counterterrorism goes back decades. “And you’re never going to be. That’s the challenge.”

To understand the threats we face, it makes sense to begin with Al Qaeda. Osama bin Laden is no more, but his successor, Ayman al-Zawahiri, is still at large and anchoring Internet videos broadcast on Al Qaeda’s propaganda networks. One of the organization’s most dangerous operatives, Adnan Shukrijumah, has been lying low but remains a major worry for the United States, where he was brought up and knows his way around.

The Arab Spring that erupted in early 2011 disrupted or destroyed critical intelligence relationships that Washington had cultivated for years in the Middle East with dictators like Egypt’s Hosni Mubarak, Tunisia’s Zine al-Abidine Ben Ali, Libya’s Muammar Gaddafi, and, yes, even Syria’s Bashar al-Assad. All were focused on fighting the threat of Sunni jihadi terrorism. Now those intelligence networks are weak, alienated, less competent, or nonexistent.

Daniel Benjamin, who was the State Department’s coordinator for counterterrorism until the end of last year, insists that “right now there is no greater threat to the United States from that region than there was before those revolutions.” True, he concedes, in Egypt, Tunisia, and Libya “the security services are not what they once were, and that increases insecurity, especially for foreigners in those countries.” (The deadly attack on the American consulate and a CIA outpost in Benghazi, Libya, last September was proof of that.) “But,” he argues, “as a base for carrying out attacks abroad, I don’t think there’s a significant change.”

Some of those in the counterterrorism trenches would beg to differ, however. The veteran official, who declined to be identified because of his involvement with ongoing operations, says that “the expansion of Al Qaeda affiliates is just incredible.” In the past 12 months alone, the State Department has added two new organizations to its list of terrorist groups, Al-Nusra in Syria, and Ansar Dine in Mali.

The biggest worry now—and Benjamin shares it—is in Syria. “I don’t see the light at the end of the tunnel,” he says. “I don’t see in the trajectory we’re on that we don’t avoid a highly fractured and failed state with a significant foothold for extremists.”

The Quilliam Foundation, an antiradical think tank in London, has tracked an even more ominous trend: the effective alliance of Syria’s Al-Nusra and Iraq’s branch of Al Qaeda, which increasingly operate as a single and effective organization—fighting the Syrian regime on one front, the Iraqi government on the other. U.S. Defense Secretary Chuck Hagel announced this week that up to 200 troops will be sent to neighboring Jordan to “prepare for a number of scenarios.” In the past, such deployments in other parts of the world often have been used as a screen for expanded covert operations.

In early 2010, the police chief of a major American city said that he had started to worry about those drones and their possible consequences for security in the United States. By this point drones were already Obama’s weapon of choice in the struggle against Al Qaeda. The president’s goal was to shrink America’s footprint in the wars of 9/11 while continuing the fight against the most dangerous bad guys. Soon after his inauguration, he began to step up the covert CIA program. At the time he accepted the Nobel Peace Prize in December 2009, he had authorized more drone strikes than George W. Bush had approved during his entire presidency. (There were only nine strikes conducted in Pakistan between 2004 and 2007. In 2010 there were 111.) By his third year in office, Obama had approved the killings of twice as many suspected terrorists as had ever been imprisoned at Guantánamo Bay.

Obama’s drone war may seem remote, but it creates dangers even as it terminates enemies.

There was little doubt that the program was effective as a tactic; drone strikes routinely killed “high-value targets” on the CIA’s hit list. And by eliminating scores of lower- and mid-level militants, the drones diminished Al Qaeda’s ability to train terrorists and plan operations. The Washington Post quoted a CIA official relaying the boast of the CIA’s counterterrorism chief: “We’re killing these sons of bitches faster than they can grow them.”

Yet at the same time, drone attacks had become another pretext for terrorists to plot against American targets—which is what worried the abovementioned police chief.

A glaring example was the case of Najibullah Zazi, a 24-year-old Afghan-American obsessed with the U.S. drone war, which he claimed was indiscriminately targeting innocent civilians in Pakistan and Afghanistan. In 2008 he traveled to Pakistan and trained at an Al Qaeda camp. In 2009, along with two friends from Flushing, Queens, he plotted suicide bombings at New York’s two major railway stations, Grand Central and Penn Station. Fortunately they were thwarted by foreign intelligence collection and good old-fashioned police work. But had they succeeded, the bombings would likely have been the deadliest attacks on the homeland since 9/11.

“We’re seeing that blowback,” James Cartwright, Obama’s former vice chairman of the Joint Chiefs of Staff, recently told the Chicago Council on Foreign Relations. “If you’re trying to kill your way to a solution, no matter how precise you are, you’re going to upset people even if they’re not targeted.”

The most insidious plan for revenge by Al Qaeda came out of its affiliate in Yemen as the drones turned their sights on the radicals there in 2010. With advice and direction from the charismatic American-born propagandist Anwar al-Awlaki, Al Qaeda acolytes made several ambitious bids to carry out attacks. They persuaded a young Nigerian to fly to Detroit with explosive underwear and blow up a plane, but all he did was burn his genitals. The Yemen crew sent bombs by international courier service to Chicago, but the packages were intercepted.

Yet the furor in the politically divided United States was so great, and the panic of the international community so obvious, that the failures were, in their own way, successful. And Al Qaeda in Yemen—apparently realizing that much could be done with very little—started to lower its sights still further. With the publication of a slick online magazine called Inspire, it sought to spread the open-source technology of terror in English to anyone who might be interested, even if they ignored or detested the Al Qaeda ideology.

Ten issues of Inspire are now available on the Web. One of the first, famously, taught you how to “build a bomb in the kitchen of your mom.” That infernal device was much like the ones made from pressure cookers that blew up in Boston.

The most recent Inspire issue sets the bar even lower, demonstrating, for instance, how to screw up traffic, and maybe cause a few fatalities, with boards full of nails and oil slicks. “Following simple instructions, you can carry out a lethal ambush,” it advises. “There is no retaliation to face, just place and vanish.”

In 2011, Awlaki and the magazine’s editor were blown away in a drone attack, but the publication goes on. Rightwing nuts can use it; so can Black Bloc anarchists, and, for that matter, conventional criminals and extortionists. All may have their own reasons for creating mayhem, but they also serve the general cause of disruption.

These sorts of lone wolves—whether inspired by Al Qaeda or a domestic agenda—are in many ways the toughest cases for law enforcement. “Mobile homegrown types are difficult to stop and to find,” says Rep. Michael McCaul, the Republican chairman of the House Homeland Security Committee. “There is not a conspiracy ring to penetrate. It’s very difficult to stop them and find them.”

“The toughest risk to address is the motivated individual with no known connection to groups, who takes it upon himself to do something,” says Roger Cressey, who worked on counterterrorism in both the Clinton and George W. Bush administrations. “The best example of that is Eric Rudolph.”

An additional challenge facing law enforcement is that, as Americans felt safer and 9/11 receded into history, the public seemed to increasingly resent the surveillance and sting operations the government carried out to try to keep the threat under control. This translated into questions about abuses, about funding, and about effectiveness. “In the immediate post-9/11 period you could be rough and ready,” as one senior law enforcement official put it. “Twelve years later, everything has to be really well defined.”

Of course, Obama himself has encouraged the public to move on from 9/11. Since coming into office, he has pushed the idea that terrorism ought to be deemphasized in public discourse. Sometimes, he may have taken that principle too far. For instance, he waited 72 hours to respond to the attempted airplane bombing en route to Detroit on Christmas Day 2009.

Yet as Obama knows, and anyone in counterterrorism operations learns, the core objective of terrorists is not to conquer territory but to conquer the psyche of average citizens. To the extent that Americans can show restraint and go on with their lives in the face of tragedies like the one in Boston, terrorism—whatever form it comes in—will never succeed.

We are not safe since we allow free access to any counyrt that has terrorists. As we have seen . Areal team of fiteen or so could bring us to our knees so easily and security has not got a need help in a big way clue!ess Security