Home Lightbox How the Taliban Are Winning

How the Taliban Are Winning 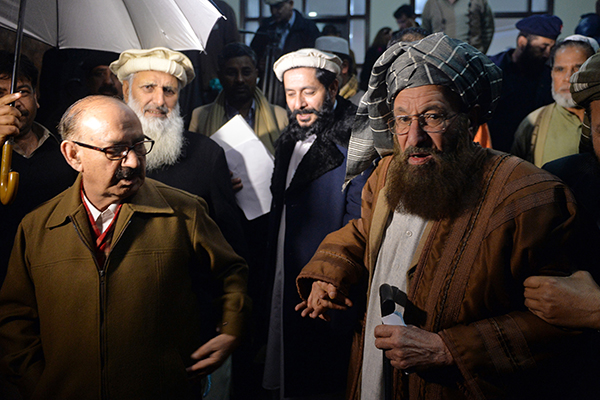 [dropcap]W[/dropcap]hile the state talks to the Tehreek-e-Taliban—a conglomeration of groups that has bombed, killed, injured and maimed tens of thousands of Pakistani citizens—some reflections on fighting wars and strategy are in order for a clearer understanding of what’s happening.

Winning is not just about dominating physical space. Though necessary sometimes, it is not a sufficient condition. Napoleon’s campaign in Spain is a good example of this. Physical dominance must translate into psychological dominance. It is the latter that wins wars. Victory, in the end, is a function of breaking the enemy’s will to fight.

Fast forward to modern times with an eye on war through the ages and one realizes that the veracity of this thought, both literally and metaphorically, has stood the test of times. War is not just a direct contest. It unfolds in multiple ways and the assessments of strengths and weaknesses, the enemy’s as well as one’s own, have to go beyond statistics and numbers.

The Soviet military was intact when the Soviet Union came apart. When the Shah of Iran abdicated his throne, his military and intelligence apparatus was largely unbroken. The U.S. military won almost all the battles in Vietnam and yet lost the war; likewise for the French before them and the Soviet Union later in Afghanistan.

Take another look at Sun Tzu’s advice about attacking the enemy’s plans. He is not just talking tactical plans. He is referring to higher strategy. The former are about fighting in the theater, the latter is the sum total of what an enemy will and can do, including using nonkinetic strategies to bolster its capability to use force. Isolating the enemy is therefore crucial. Tactical brilliance will only matter if it unfolds under the overhang of a strategically sound plan. This is what Clausewitz referred to and distinguished as the “purpose” and “aim” of war: the aim must be defined by the purpose and be subordinate to it.

Just after World War I, British soldier and war theorist Liddell Hart came up with the idea of the strategy of indirect approach, a set of principles which Hart argued must be followed: “In strategy the longest way round is often the shortest way there; a direct approach to the object exhausts the attacker and hardens the resistance by compression, whereas an indirect approach loosens the defender’s hold by upsetting his balance.” Echoing Sun Tzu, Hart argued that “The profoundest truth of war is that the issue of battle is usually decided in the minds of the opposing commanders, not in the bodies of their men.”

The strategy of the indirect approach is a concept that is applicable to both tactical operations and the conduct of higher strategy. Hart, as also Maj. Gen. J. F. C. Fuller, another British war theorist, were deeply opposed to the concept of fixed defenses. Fuller was a believer in tank concentrations; Hart argued for armored units supported by mechanized infantry and mobile artillery, what later came to be known as self-propelled artillery.

While there is much controversy over Hart’s and Fuller’s influence on German generals, evidence does suggest that the Germans, including Hans Guderian, were aware of the concepts propounded by Hart and built the Panzer and Panzer-infantry units around them, even as the British Army largely ignored them.

Ironically, as Hart was expounding his concept and railing against the concept of static defenses, the debate within the French military on a future putative German strike was won by those in favor of creating a multilayered line of fortifications. Thus came into existence the infamous, supposedly invincible Maginot Line. The French thought that the line on the right flank, the Ardennes and the Meuse in the center, geographical double barrier of sorts, would help them concentrate the main force on the left flank. The thinking was that the main German thrust would come from Flanders. It was a good defensive strategy except they hadn’t factored in the Manstein Plan.

The French were expecting a repeat of the Schlieffen Plan. That was not to be. Manstein’s two plans, a combination of envelopment (Schlieffen’s obsession) and breakthrough caught the French and the British forces by surprise. The German plans—Case Yellow and Red—are a superb example not only of the strategy of the indirect approach but also of the superiority of mobility over a defensive strategy that hampered mobility.

To recap, the point is that fighting is about staying ahead of the enemy. Equally vitally, taking the indirect approach is always better and very often also makes space for a direct thrust by throwing the enemy off balance. A defensive plan is best conducted in the mode of active defense. But while these concepts have been physically tested in the field at various times, beginning with Hannibal’s crossing of the Alps and the famous double-envelopment at the Battle of Cannae, these are also metaphorical concepts with applications much wider than just theater-tactical military operations.

This is also the point where we return to the Taliban. They are offering the state a contest at multiple levels: physical, psychological, ideological. At the physical level, their attempt has been to ensure that they do not lose, which means denying the state a clear victory. Their physical efforts are complemented by the psychological and ideological space they have gathered over decades and in which they were helped by the state itself.

Take a look at their demand for implementing the Shariah. Conduct a survey even among the literate—I deliberately eschew the term ‘educated’ because there are so few of them—and you will see the frustratingly simplistic notions people will mouth. Bring in Shariah and we will be right back in the Garden of Eden. We are killing each other because there is no Shariah; once we have killed through to the Shariah, all will be well. This is a terrible argument in itself, justify as it does killing in the name of reaching some utopia, but despair the thought that anyone will take pause to realize that it is the multiple interpretations of Shariah that are locked in this bloody contest for dominance. The circularity of it is mind-blowing.

The Taliban have put on the table the biggest deception this nation is living with; they are using the state’s project of national identity against the state now. And the majority of this society supports that demand. No one can play this game better than the clerics and no politician, including the prime minister, can say that this country was not begotten as a theocracy.

When the political parties decided to talk to the Taliban, they legitimated them as a negotiating partner. Now, with Shariah on the table, the Taliban are signaling to the people and asking for legitimacy. Note another demand: equal rights for the rich and poor. This is Lenin’s Vanguard in an intimate embrace with Islam’s Jamaat al-Saliheen.

The strategy is to create and exploit the advantage. The Taliban cannot win physically in a direct contest. If they had been confined to the tribal areas, military operations would have finished them off. They know it. This is why they attack in the cities. They also know that it is the fear and uncertainty generated by such attacks that will break the people’s will to fight. Every attack makes people wonder what the state is doing. For its part, the state is constrained in mounting an effective response to such attacks for several reasons, not least because the state is now fighting a society that is about to make shipwreck on the rocks of a pious deception. How can one rid a society of something society wants to embrace?

The real question, therefore, is not countering terrorism; the basic problem is countering a mindset of which these groups are merely an extreme, violent expression.

The Taliban, having won this round, need to move from generating violence to providing a context to it. And what better than to highlight the state’s perfidy by cloaking it in the pious robe of Shariah, adorned, for good measure, with anti-Americanism. If someone is still not convinced, let them read in full, and with the understanding reading requires, the interview published here of the Taliban spokesperson, Shahidullah Shahid. And as for why the Taliban strategy is succeeding and what I mean by a society gone out of joint, just watch this video.

Thank Mr Ejaz Haider for letting us know how well read he is..Sun Tzu, Napoleon, Liddell Hart, J F C Fuller..China, France, WW1, WW2..and then he slumps by addressing Hitler’s great Panzer leader, inventor of “blitzkrieg” warfare, as “Hans” Guderian..it’s Heinz, dear sir, Heinz..of course if this is an error on the part of Newsweek, I don’t know what to say..

After reading all this the first thing thta came to your mind was a spelling error?

From the article: Echoing Sun Tzu, Hart argued that “The profoundest truth of war is that the issue of battle is usually decided in the minds of the opposing commanders, not in the bodies of their men.”

By that standard, Pakistan is already lost since its to commander has already said echoing his military that there is only a 40% chance of “success”.